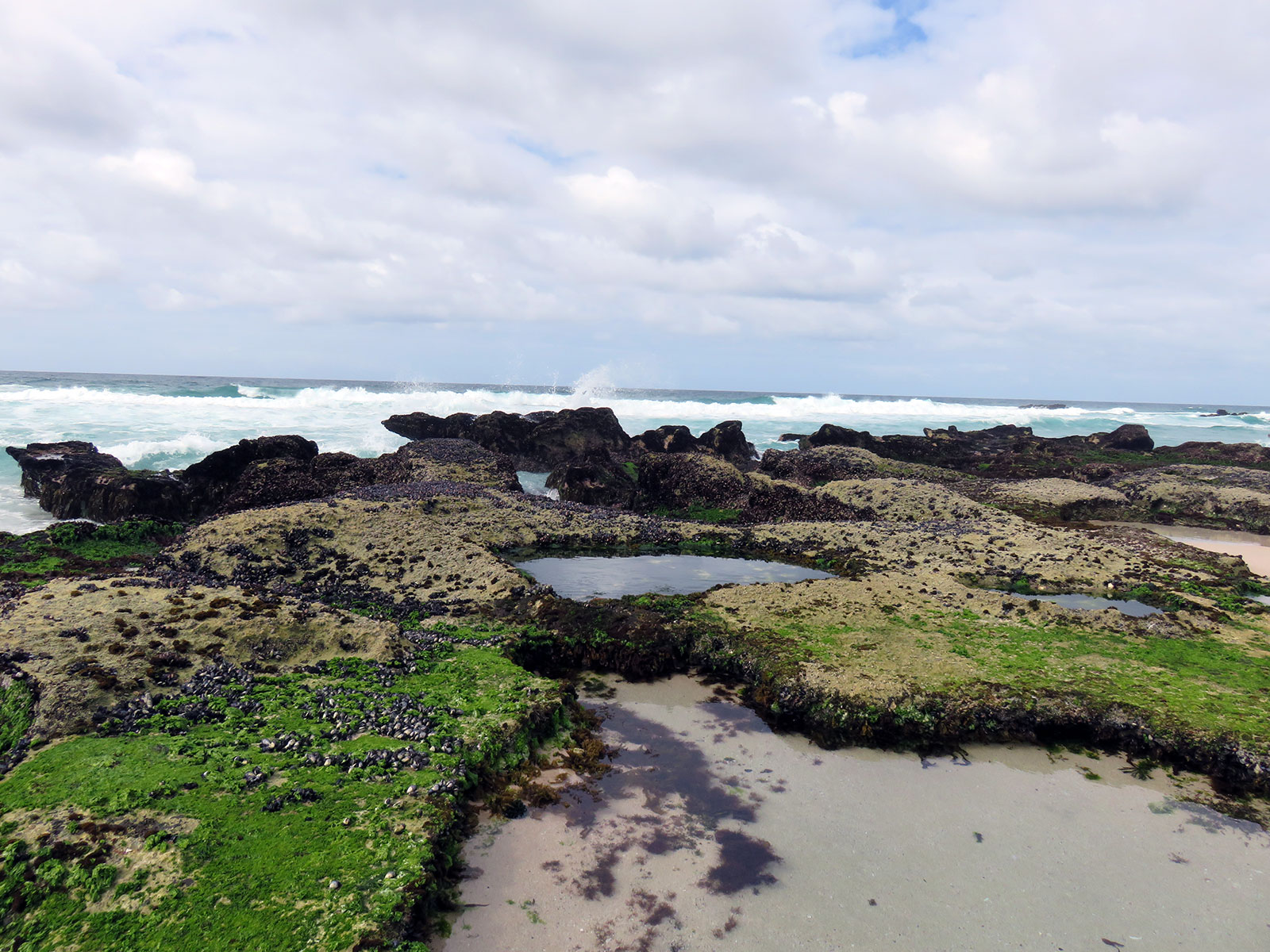 After the fairly relaxed walk of day 3 we had lots of time to chill at Hamerkop. Luckily it is a great place to relax. The main attractions are the outdoor braai area on the ground floor and the balcony overlooking the beach next to the upstairs fire place.

Most of the afternoon was spent braaing the last of our meat. When we eventually made our way back inside we found that we were once again having supper by candle light. Due to the overcast weather, the solar panels had not really managed to charge the batteries much. This didn’t really phase us too much as we were quite used to operating in the dark by then. 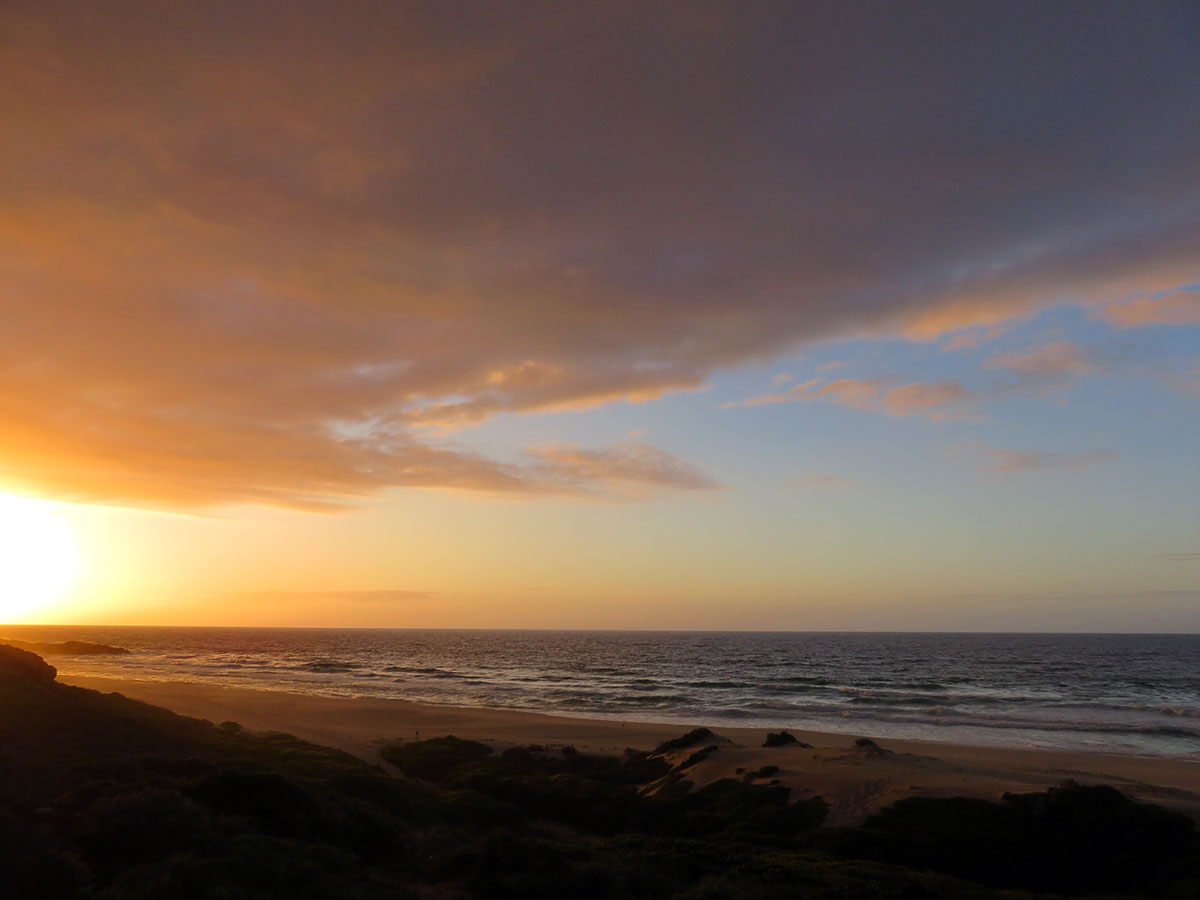 The view of the sunset from the balcony

Since day 4 starts with a long walk on the beach most of us decided to wear sandals to give our feet a bit of a break from the heavy boots. We kept our boots on us since we knew we would need it later in the day as the path eventually gets a bit rocky which would be quite tricky with sandals.

One tip that we picked up from the helpful signage in Hamerkop is to follow in each other’s footsteps as the compressed sand is a lot easier to walk on. So we set off in single file along the beach.

Walking along the beach with no one else around was a really serene experience and the time really flew by. When we came across the 4km marker we were quite surprised at the distance we had covered. Another surprise was waiting for us on the beach just ahead. We spotted something small in the distance and when we got a bit closer we realised it was a seal pup! 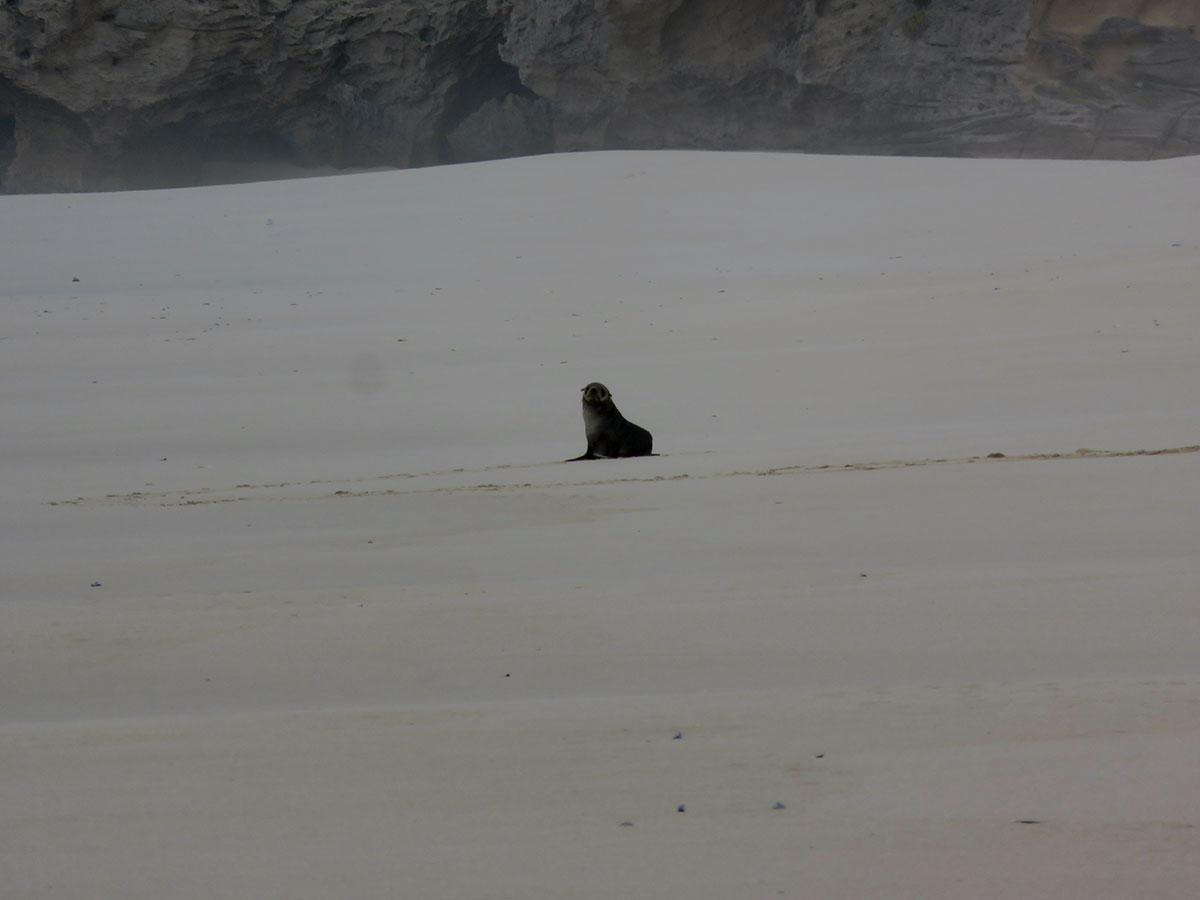 Eventually the pup made a hasty retreat back to the ocean. Disappointed that we couldn’t get better pictures, we moved on to have a look at the rock formations that can be seen in the background of the picture above. 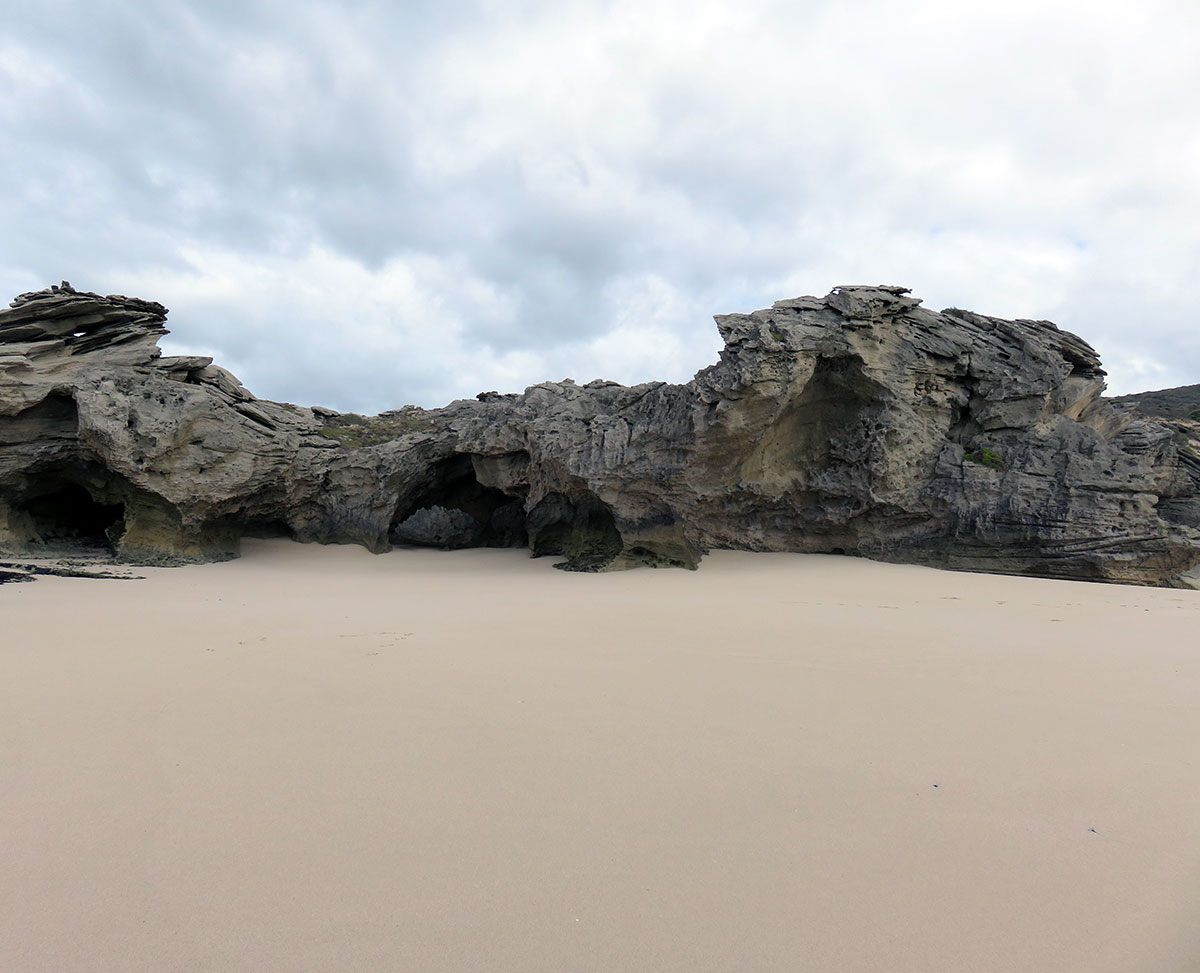 While exploring around here the pup came back ashore and started approaching us before deciding that we weren’t all that interesting and retreated back to the ocean.

All along the path on the beach we saw litter that had been washed up. It was quite sad to see how badly we abuse our oceans. All the unnecessary littering ends up spoiling a bit of beach that is as pristine and quiet as this. One of the pieces of litter we spotted was rather interesting though. A bottle for a drink that none of us had never seen before with muscles growing on it. 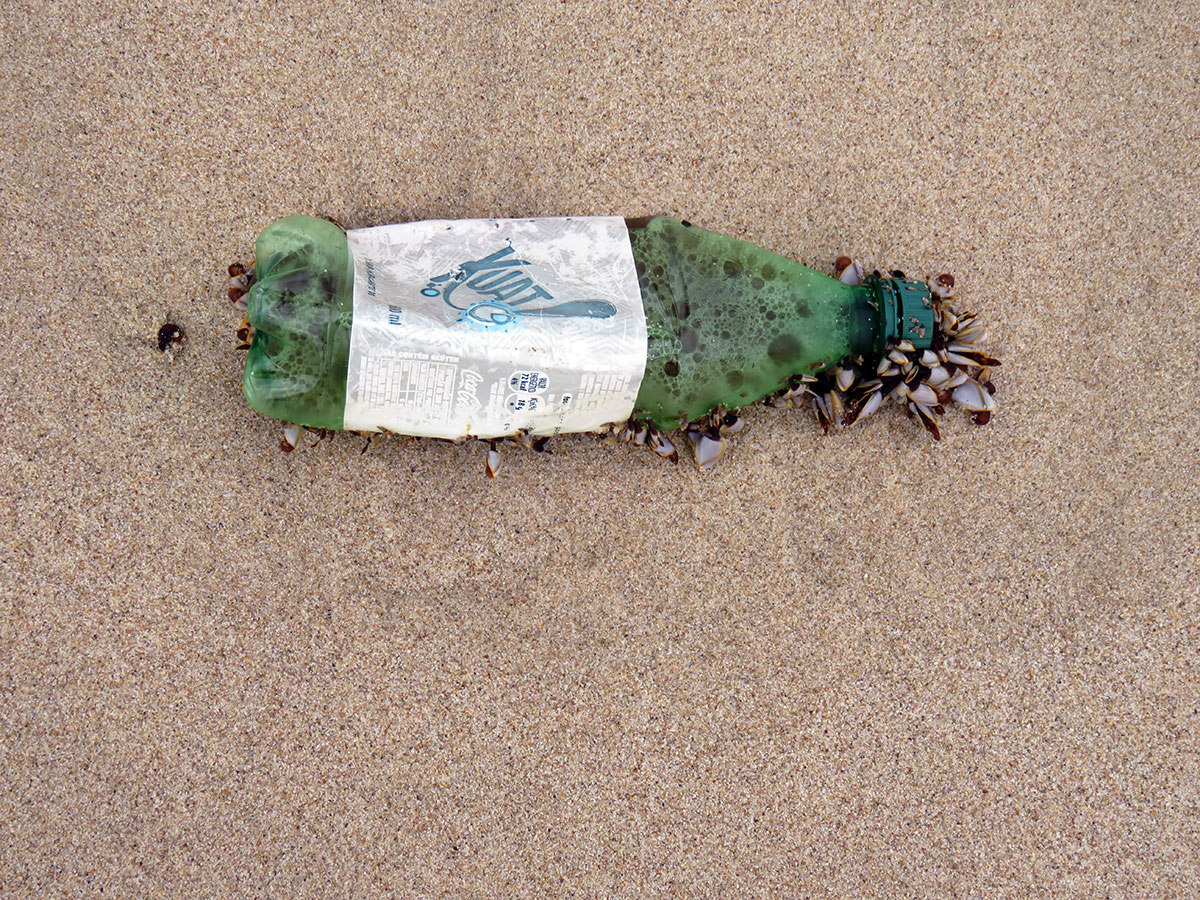 After the rock formation we had to navigate a 1.5m drop. This was quite tricky, but the fact that we were landing on soft beach sand made it bearable. Once we successfully navigated that we spotted a rock absolutely covered in muscles. 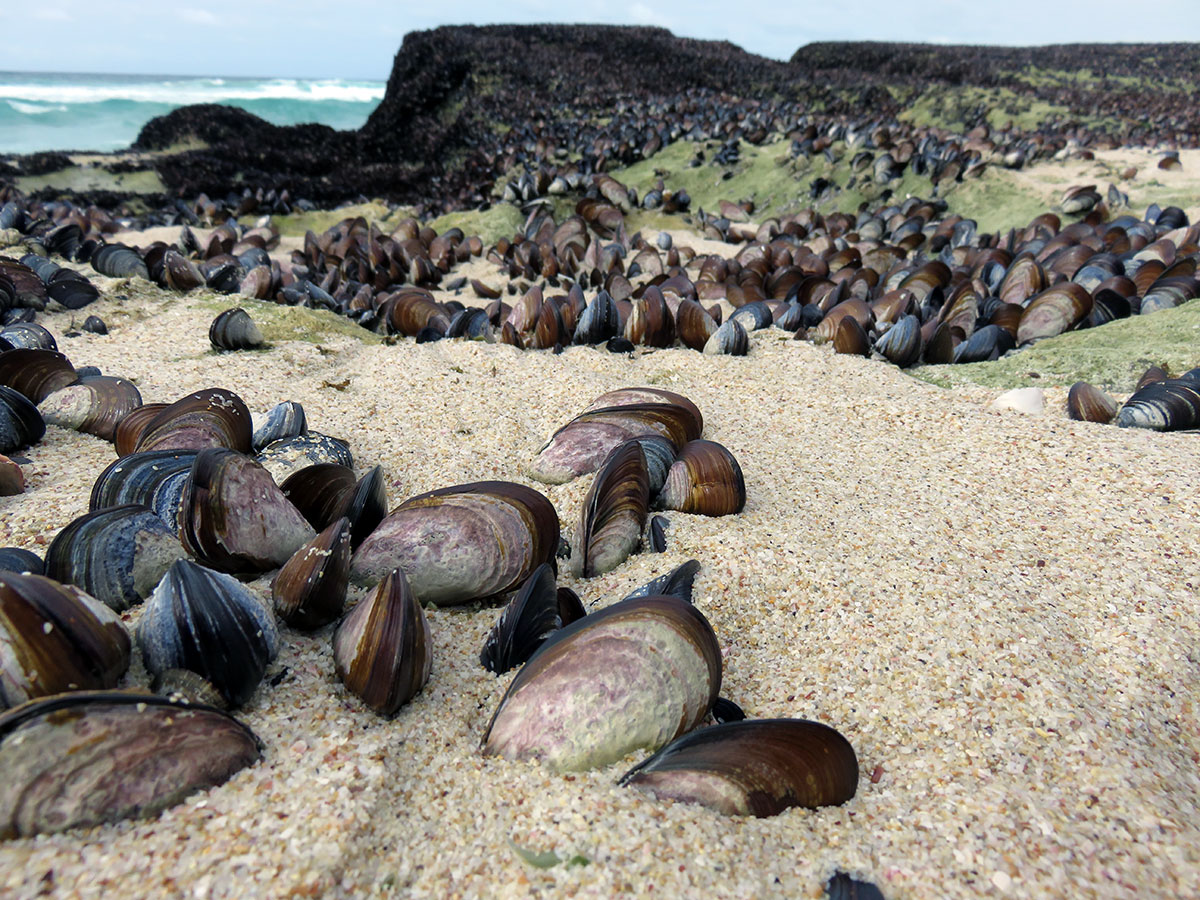 It was around this time that we also started noticing the increasing amount of rock pools. These are stunning! We spent lots of time peering into them to see what sort of wildlife inhabited them. We managed to catch glimpses of crabs, sea snails and schools of tiny fish. 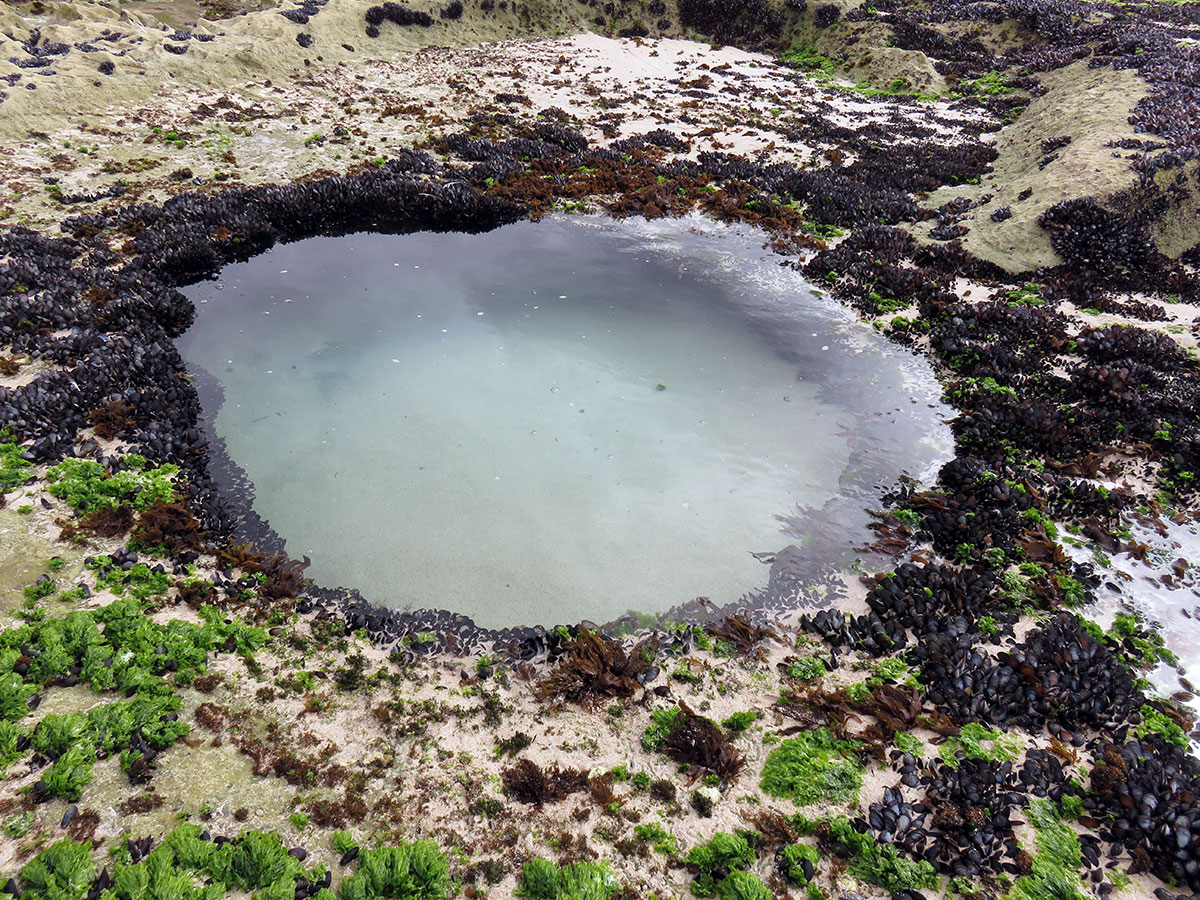 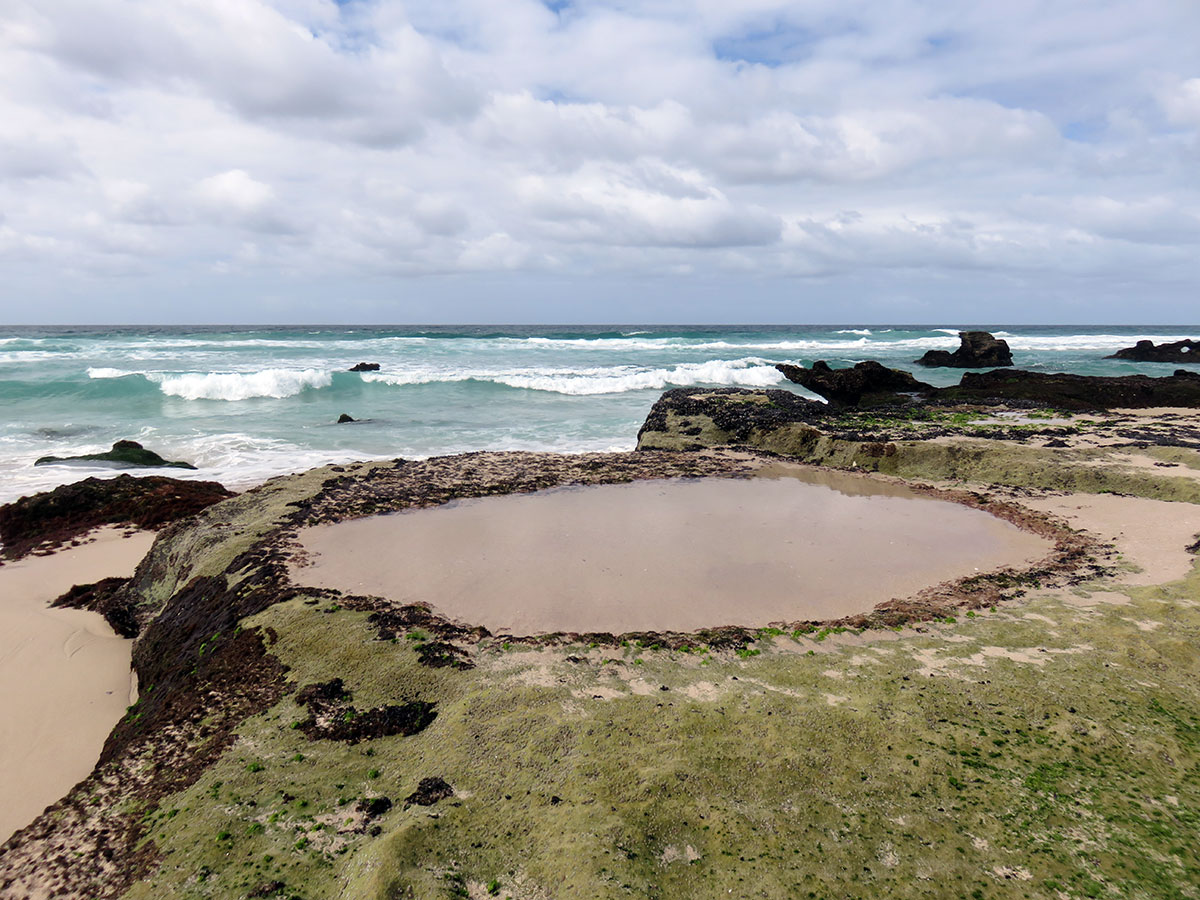 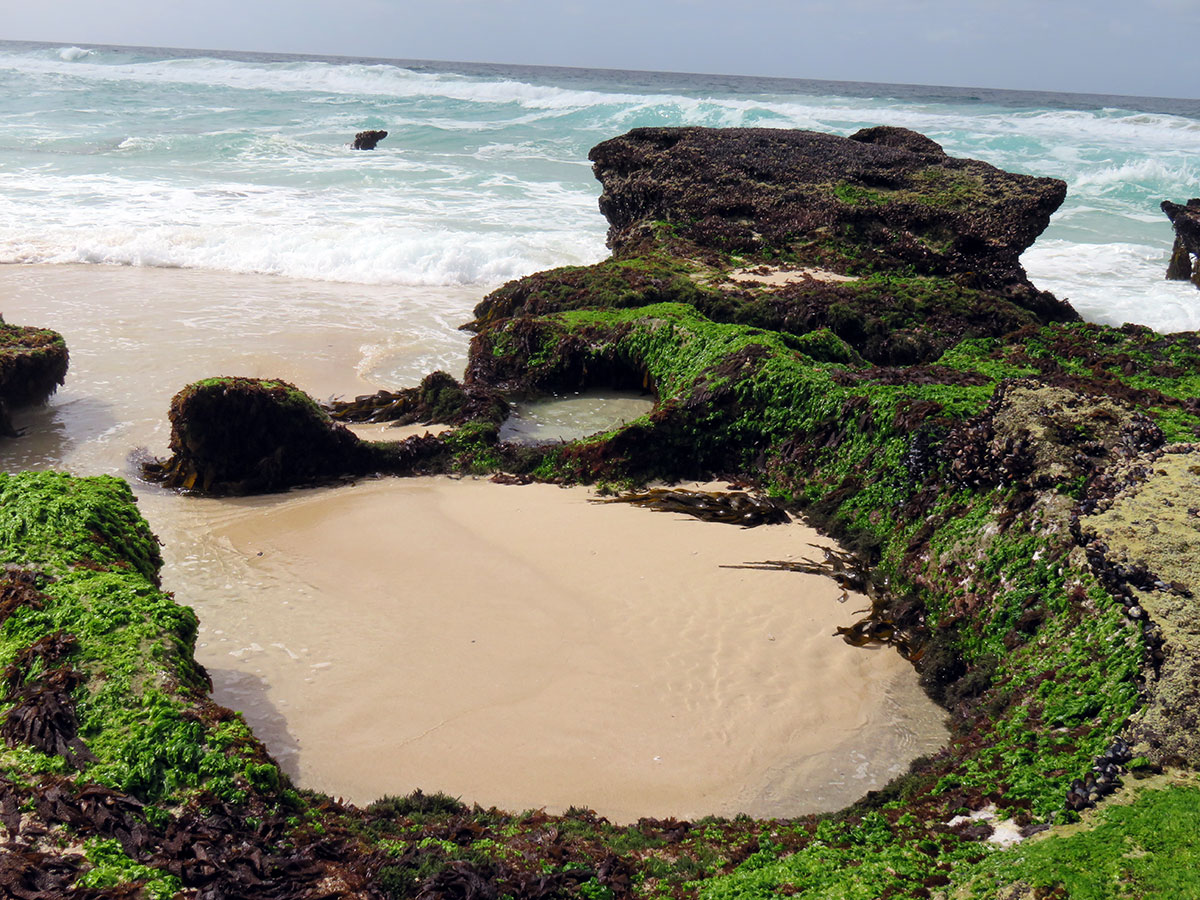 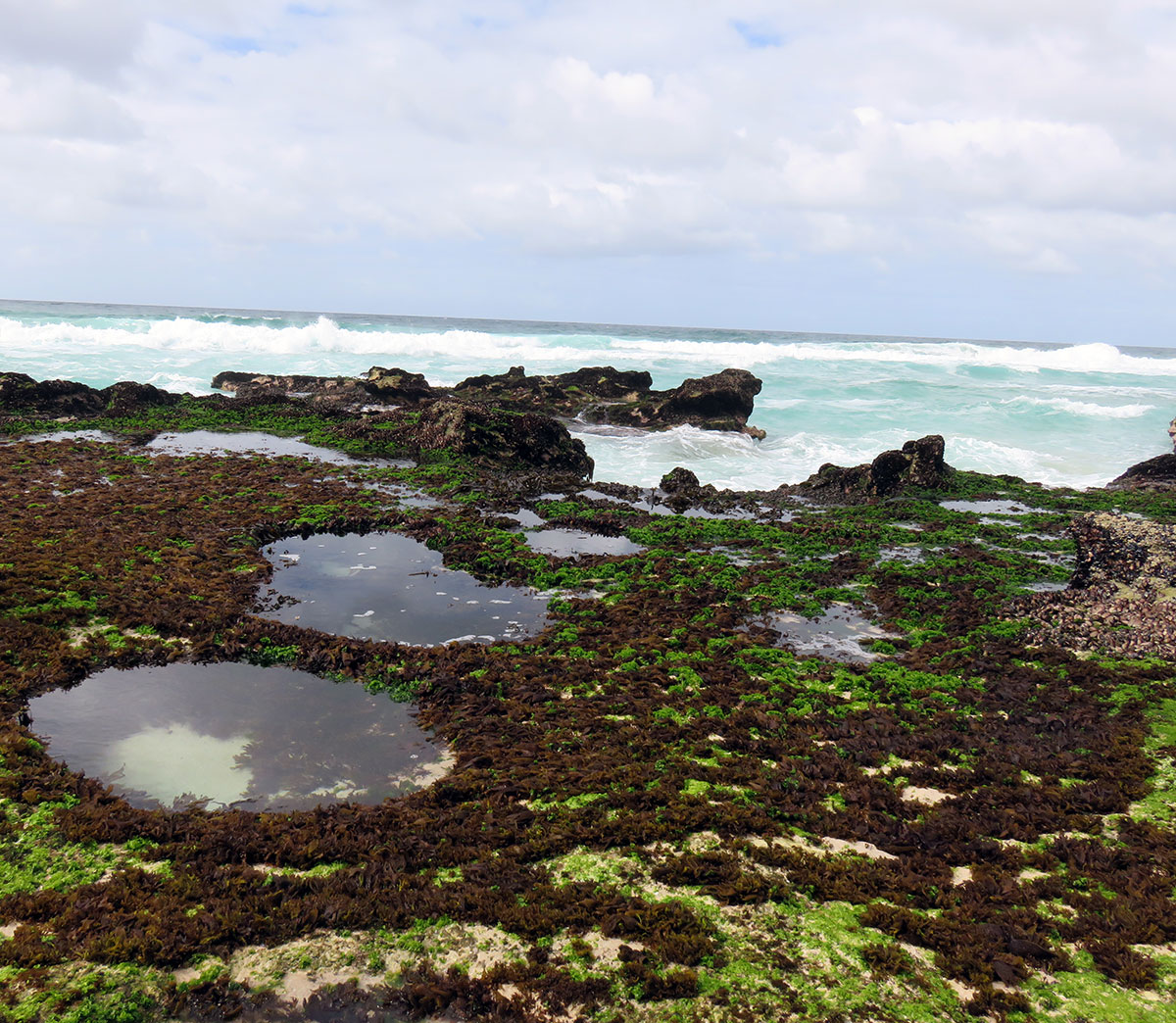 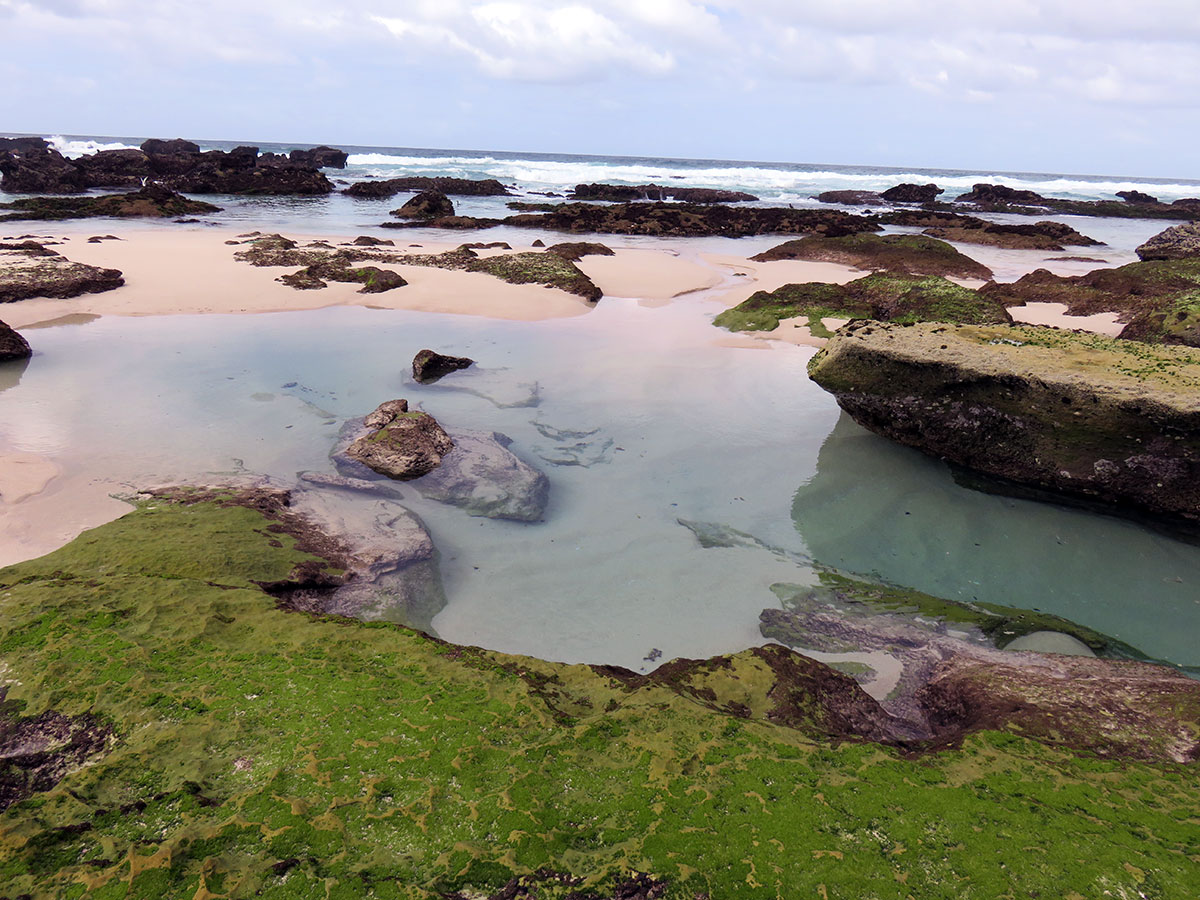 Shortly after the rock pools, at around the 6km marker, we found a spot to sit down and have some tea. 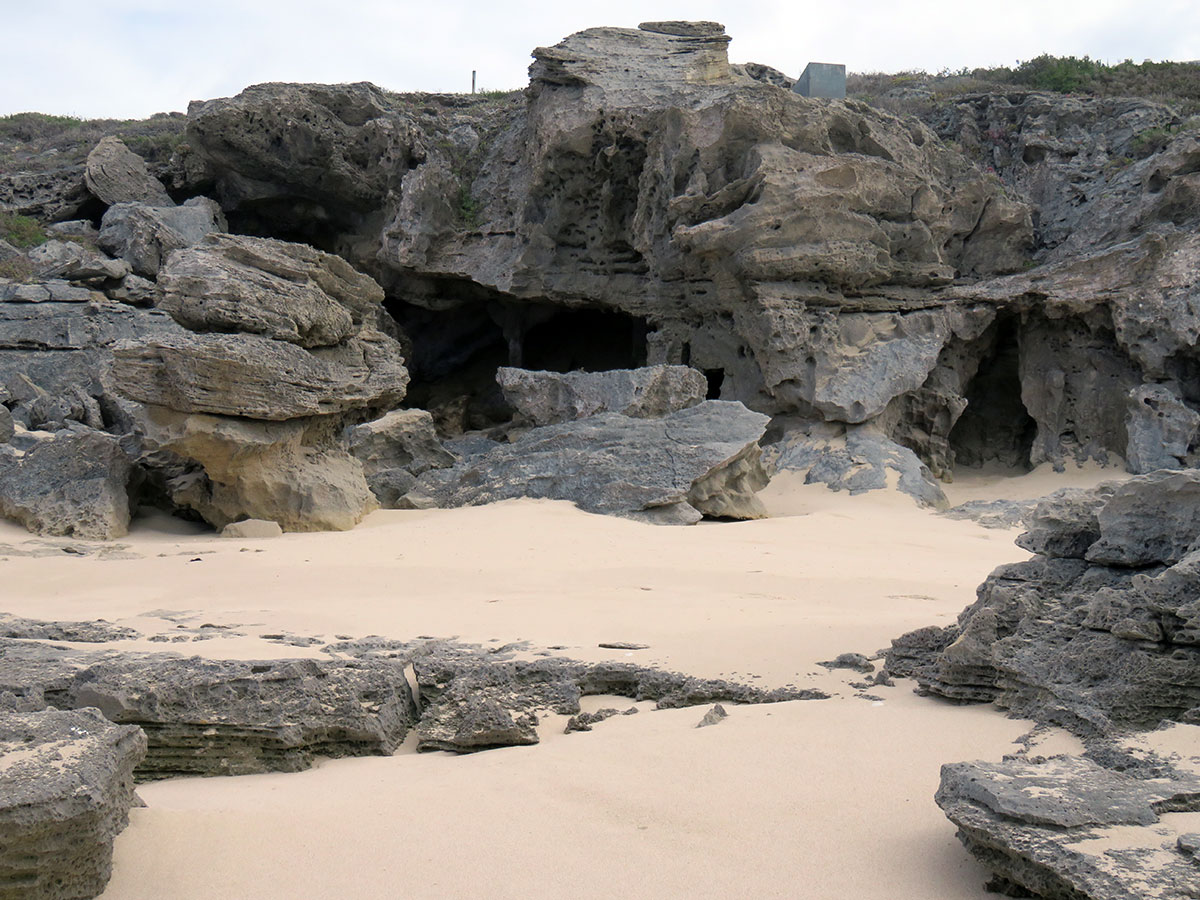 Just after this rock the path started climbing away from the beach, so we had to abandon our sandals and switch back to our boots. We also came across a sign marking this as a whale watching spot. Since it wasn’t really whale season, we didn’t have too much hope of spotting anything, but that didn’t stop us from getting the binoculars out and trying.

Disappointed by the lack of whales we trudged along. A bit further on we started noticing a large amount of ants all over. They were quite large and climbed up our shoes whenever we stopped, so we decided to pick up the pace. This went on forever! I’ve never quite seen that many ants in one place before, the floor looked like a swarming black mass. After about 10 minutes of this we finally got to less hostile footing and found ourselves at a massive rock pool. This is where we decided to break for a light lunch. 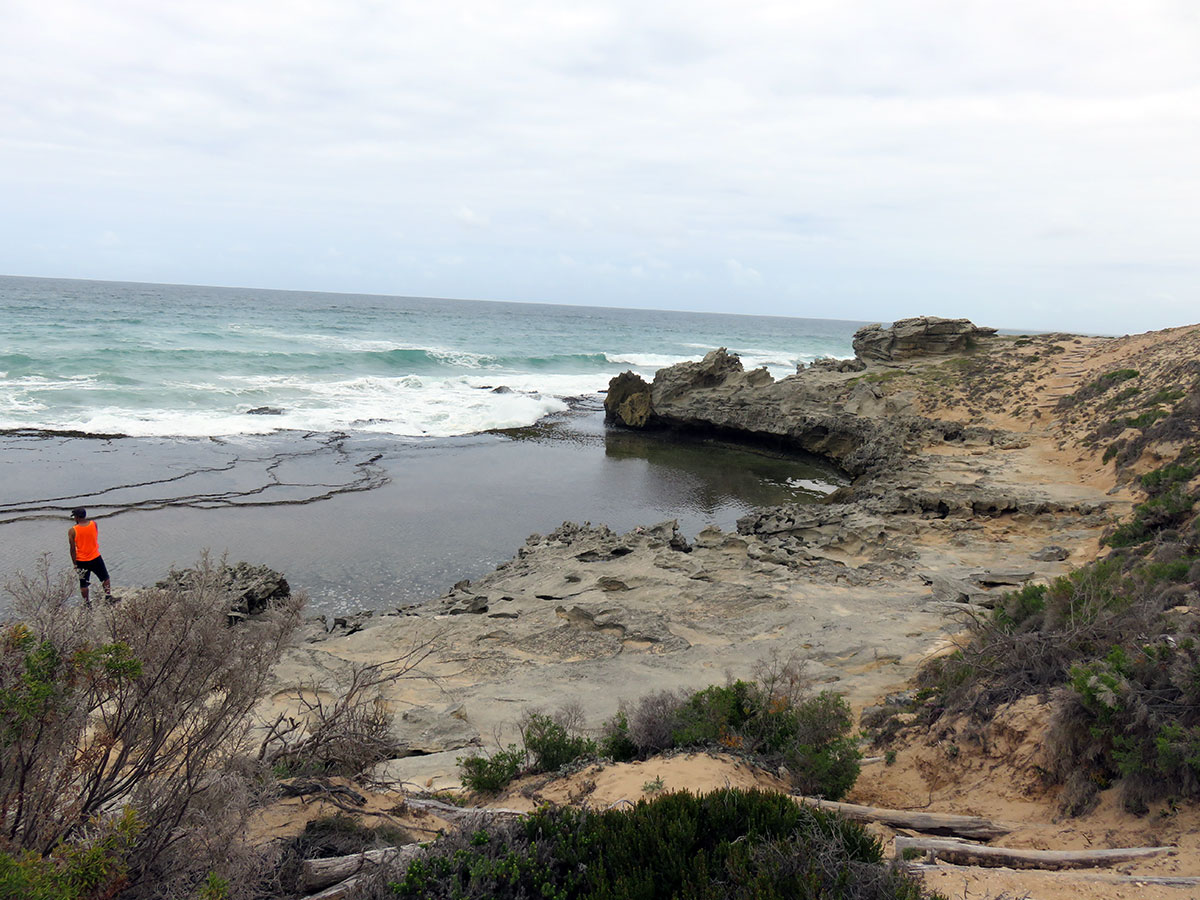 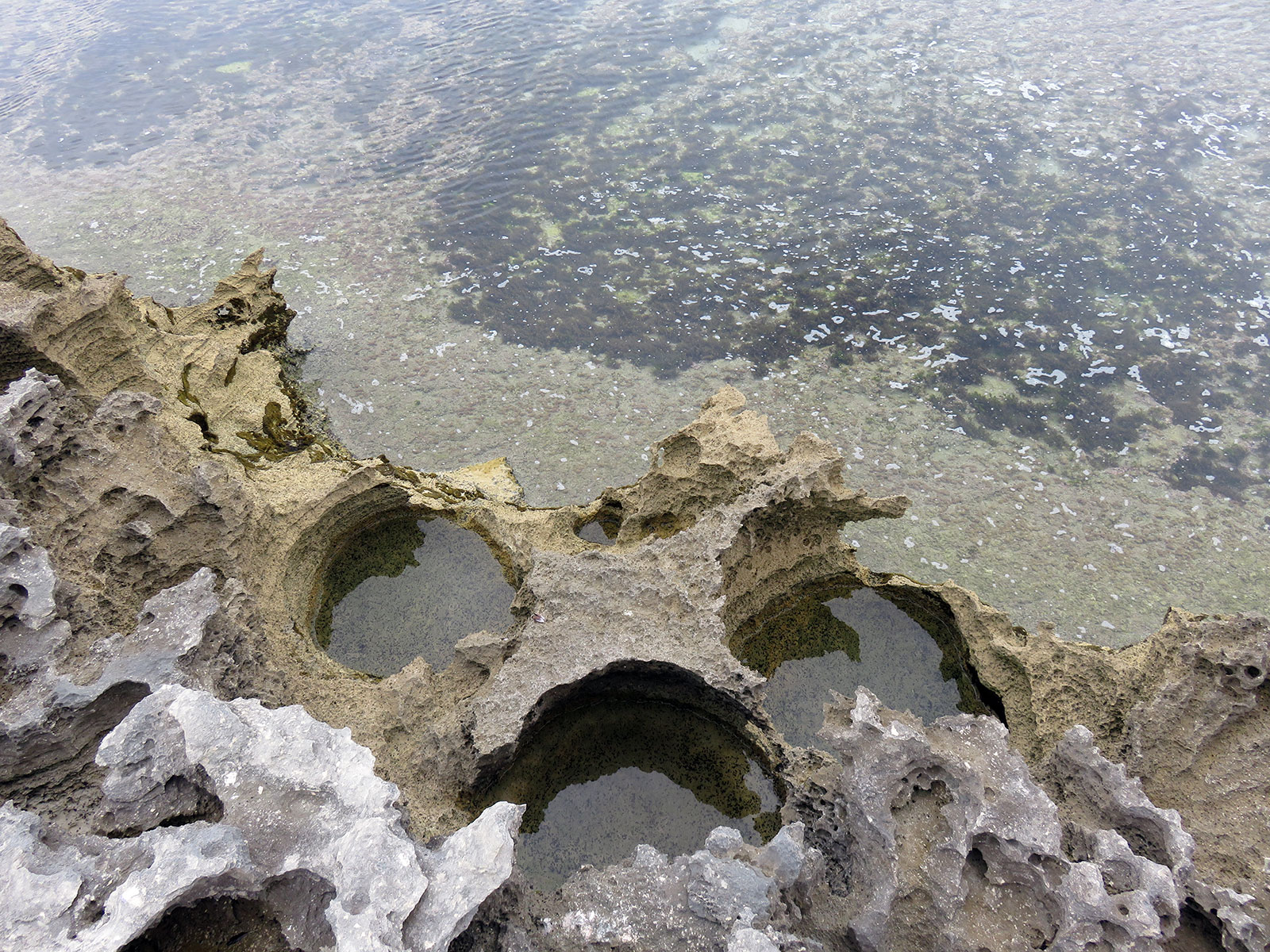 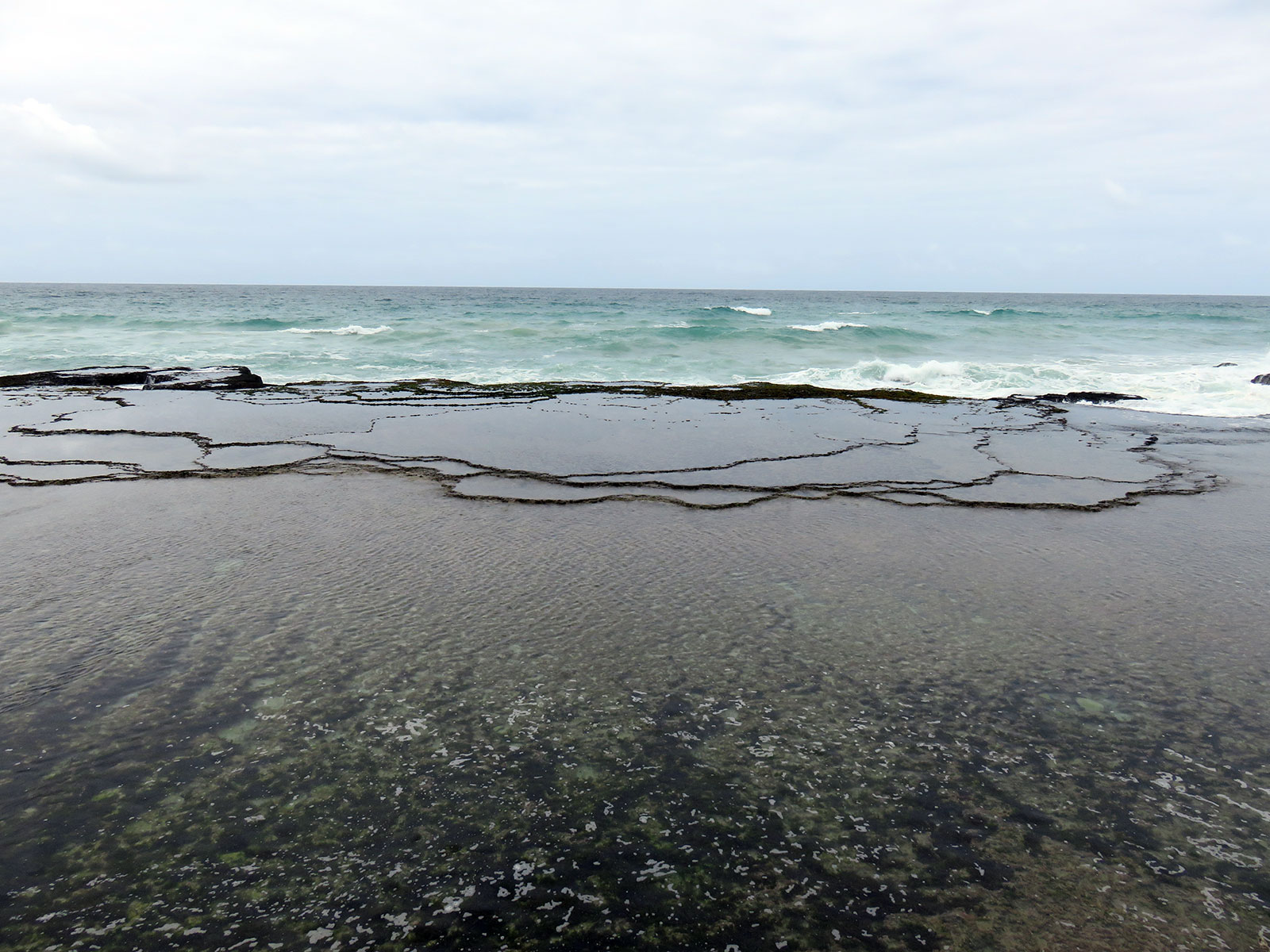 The spot was so beautiful that we lingered here for quite some time drinking in the views. It was also starting to dawn on us that we were almost at the end of this beautiful trail. With slightly heavier hearts at this realisation we started off again on the last few hours of the trail to Vaalkrans.

The scenery here was quite different to what we saw on the beach walk, with lots of cool rock formations. 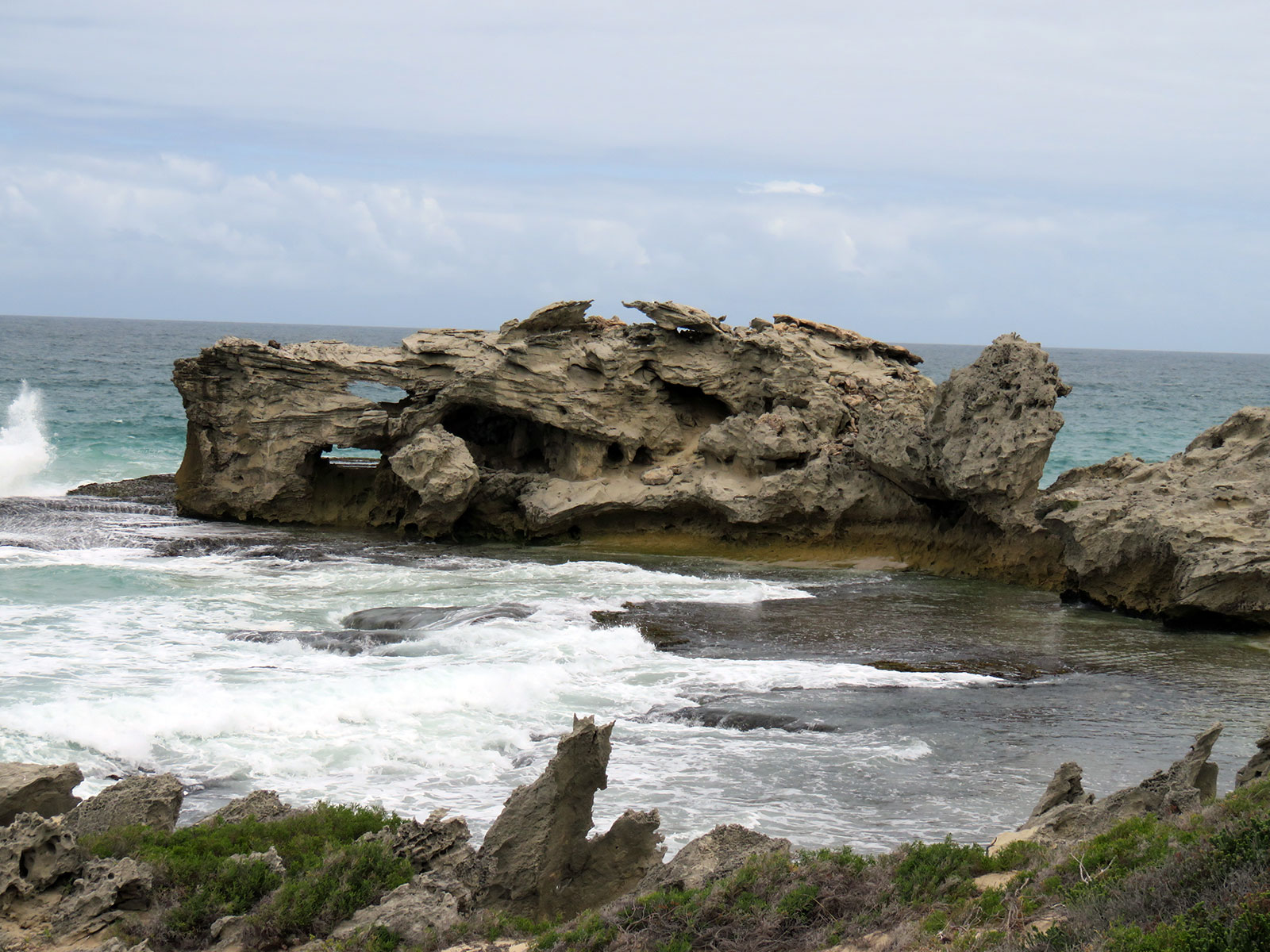 Eventually we came across what must have been a building a very long time ago. I couldn’t find any information of what this was, but there wasn’t much left of it. Maybe it was one of the older huts? 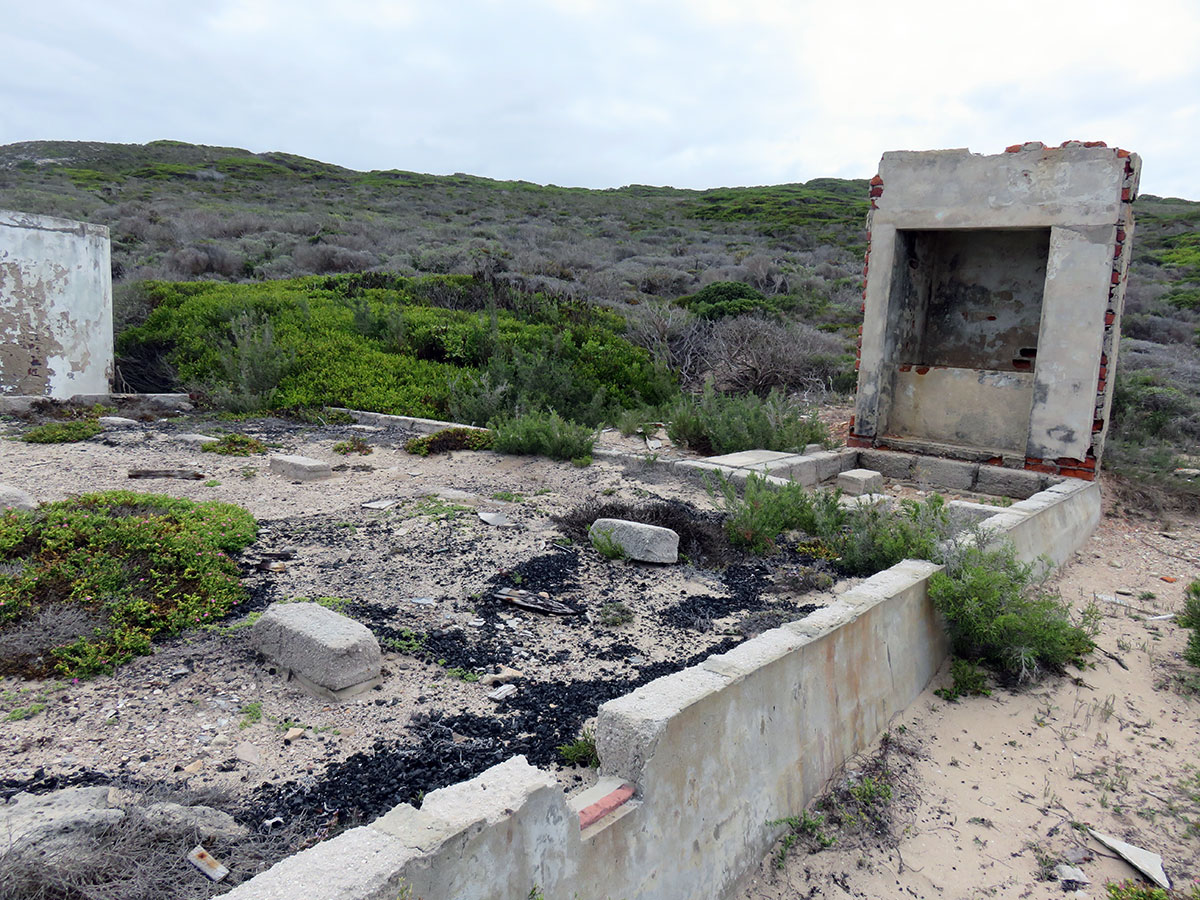 There was some cell signal here, so we stopped to send a few messages on our status and headed on.

Just over the hills surrounding the ruins we spotted the roof of the Vaalkrans hut and with that, day 4 was over. 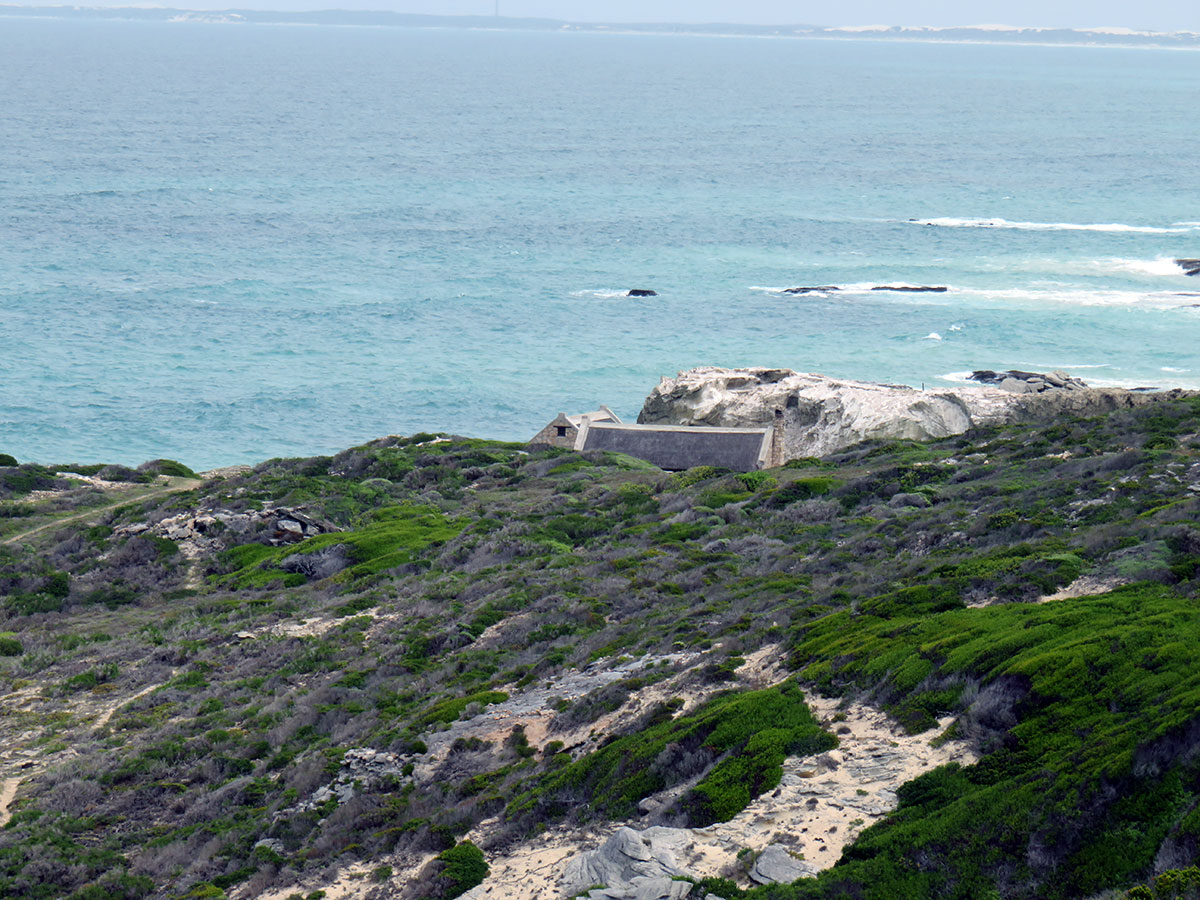 The fourth day was a fairly easy walk mostly along the beach. The distance was just over 10km and took us 6 hours to complete. We really took our time admiring all the views with multiple long stops along the way. The rock pools are a delight and definitely the highlight of the day. 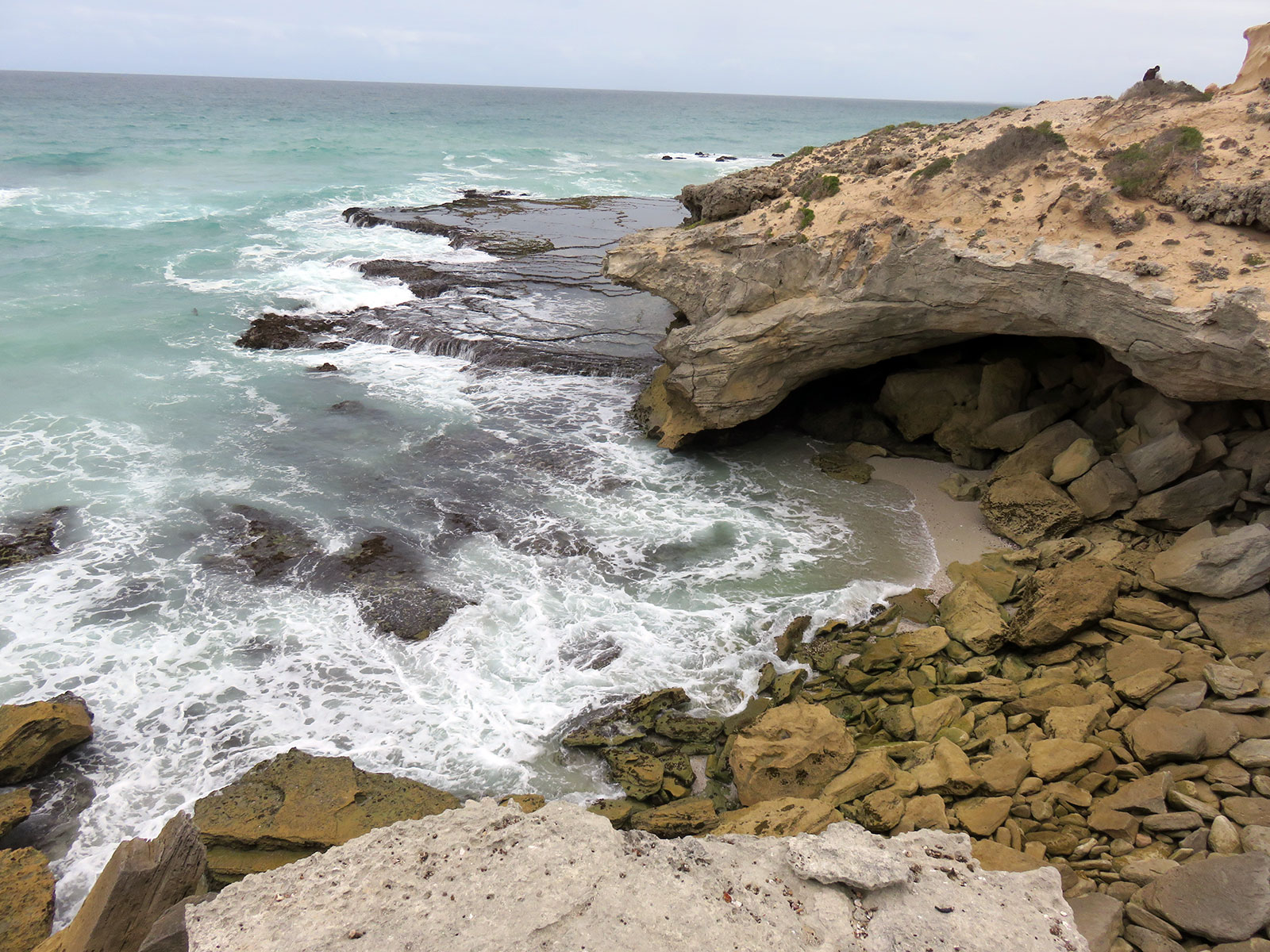