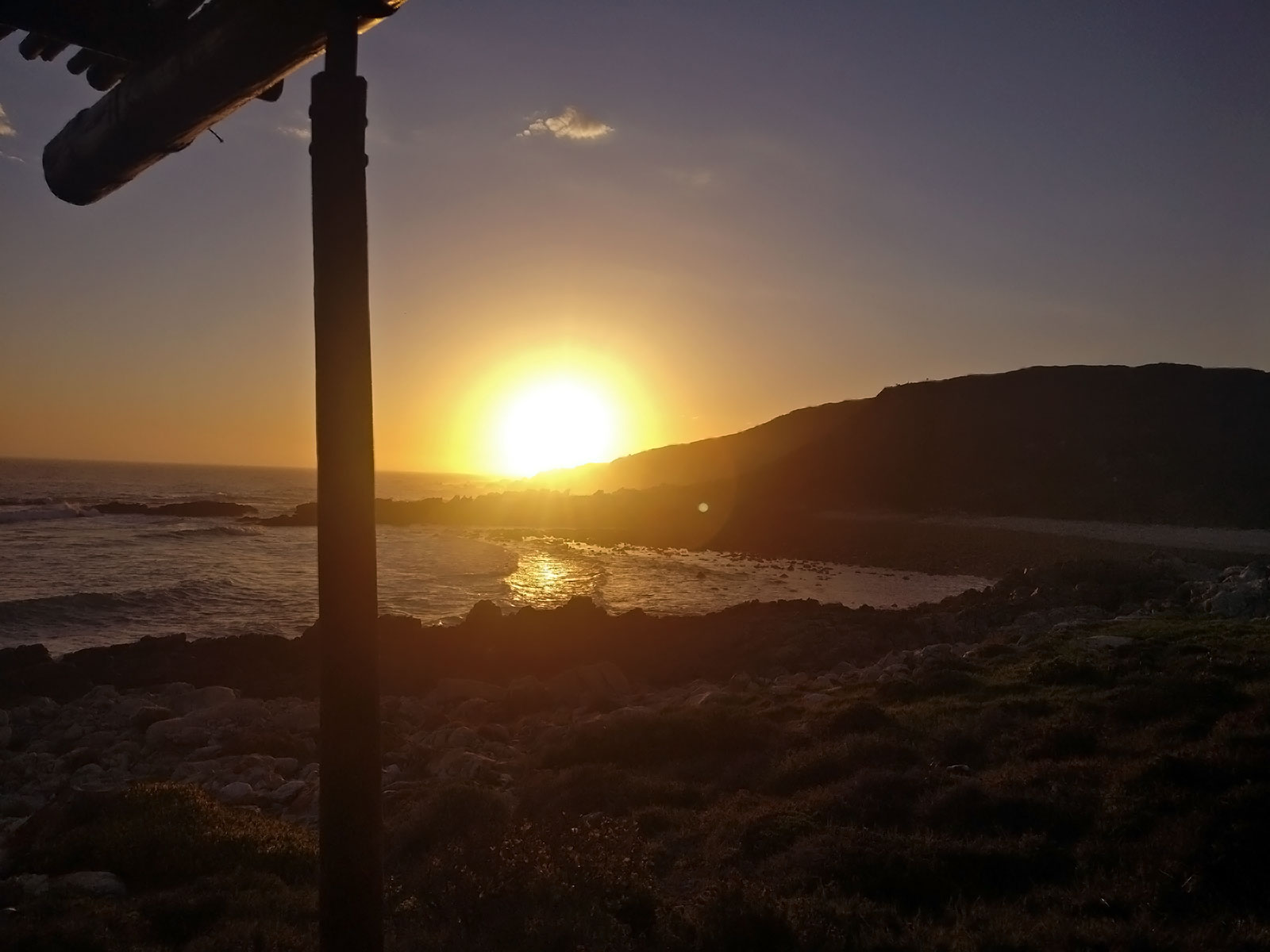 When we finally reached the Cupidoskraal hut we had to relax our weary legs and shoulders for a bit before starting the fire to get supper going. This may or may not have been a mistake as we decided to braai outside. By the time we got our fire braai-ready the sun was busy setting. This wouldn’t normally be an issue as there are outdoor lights at the hut but a fallen tree had damaged the batteries. Since the electricity to power the lights is generated with solar panels, we were left without lights. To make matters worse we started hearing some rather alarming sounds from what felt like just beyond the trees surrounding the hut. Luckily we managed to finish the braai without incident. After supper (by candle light) we were all so exhausted that we decided to have an early night to prepare for the hike the next day had in store.

Day 2 is another long one at around 15km with a climb to around 430m altitude. We decided to get an early start so after repacking our bags and a hasty breakfast, we set off. The trail starts at the ruins of the old hut so we made our way back through the forest (which felt a lot shorter than it had the previous day) and took a right. After a bit of walking we reached a dam. 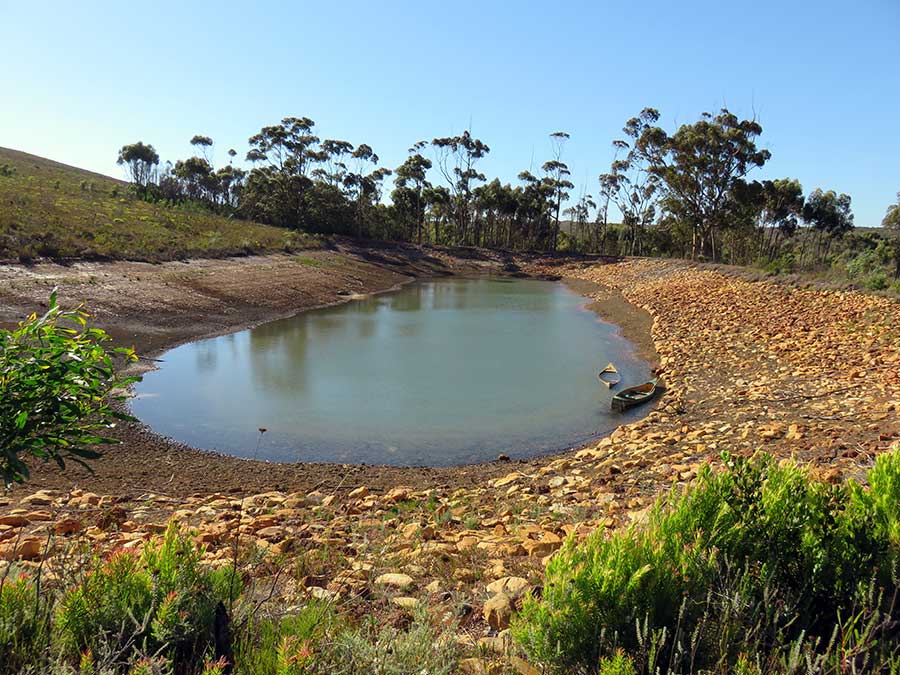 The sun was already quite intense, we had to fight the urge to jump in.

The path starts climbing almost immediately after passing the dam and soon we could see the ocean. We knew that would be our destination since our next stop (the Noetsie hut) was on the coast. 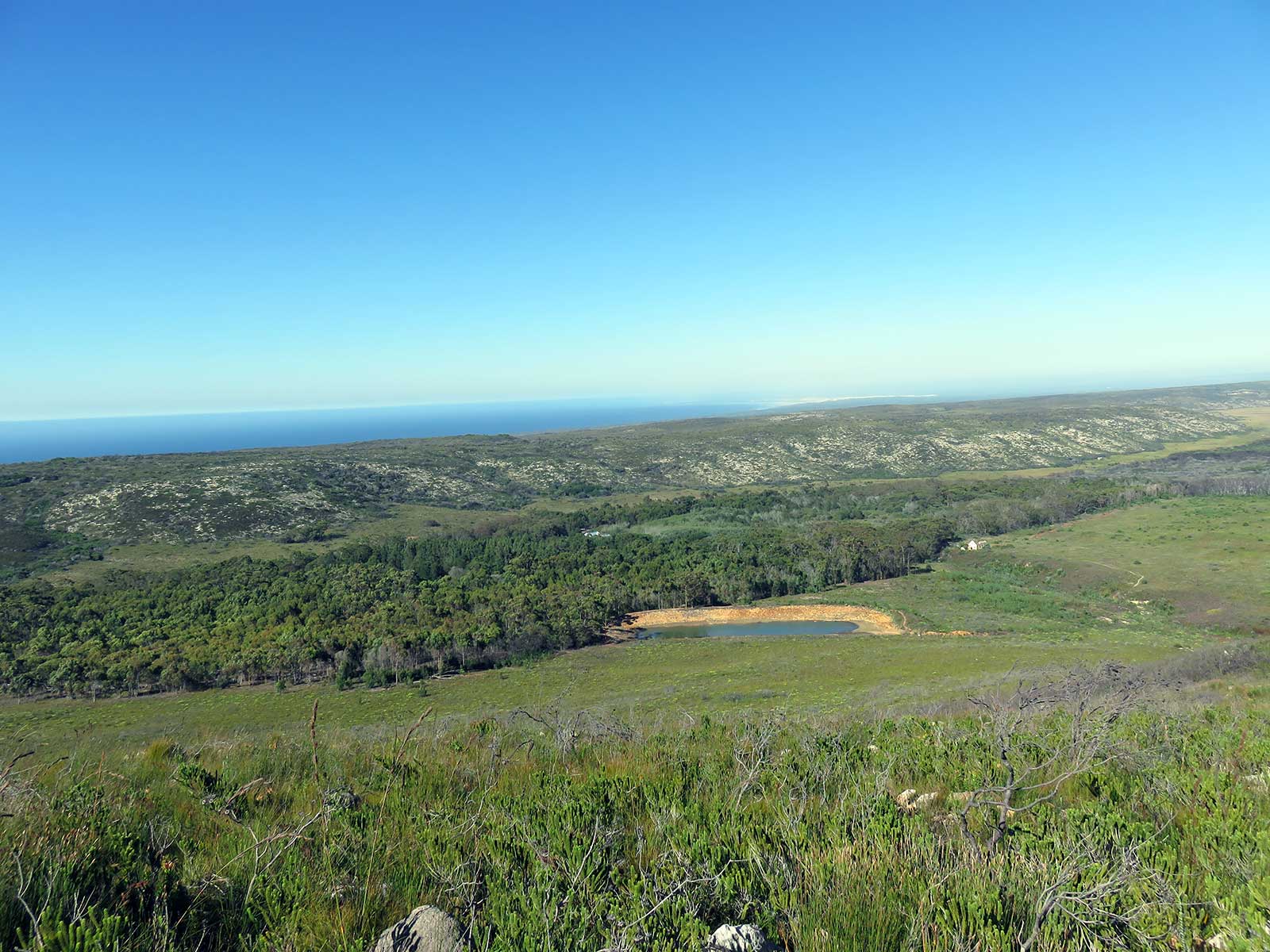 If you look closely you can see the new Cupidoskraal hut located in the middle of the forest.

After the dam you will face most of the climb to the 430m peak along flat, sandy ground. There isn’t too much to say about this section of the hike because the terrain is rather featureless. We encountered lots of spiderwebs woven across the path which kept us on our toes as we tried to disturb them as little as possible. 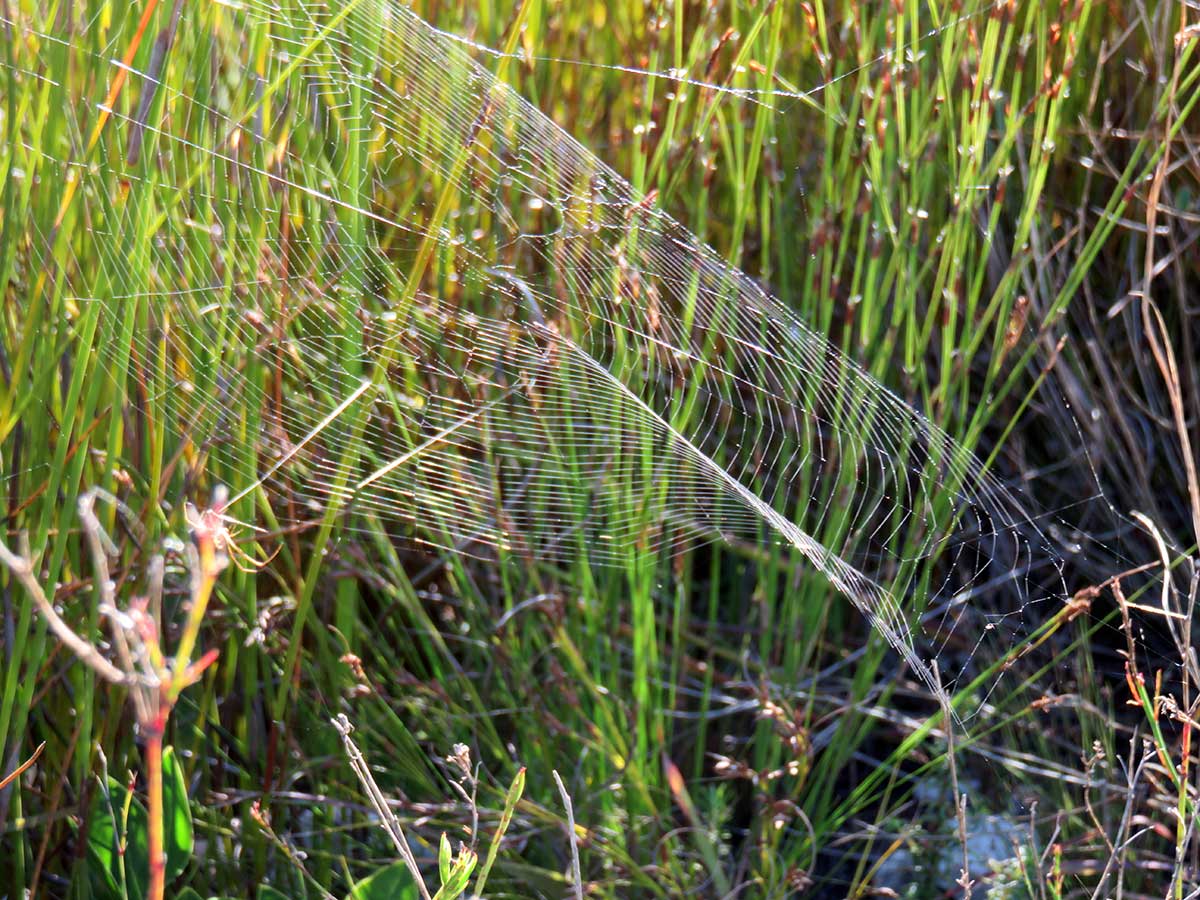 After a while the trail seemed to overcompensate for the lack of features before because we started spotting lots of interesting rock structures, a forest of dead trees and huge anthills. 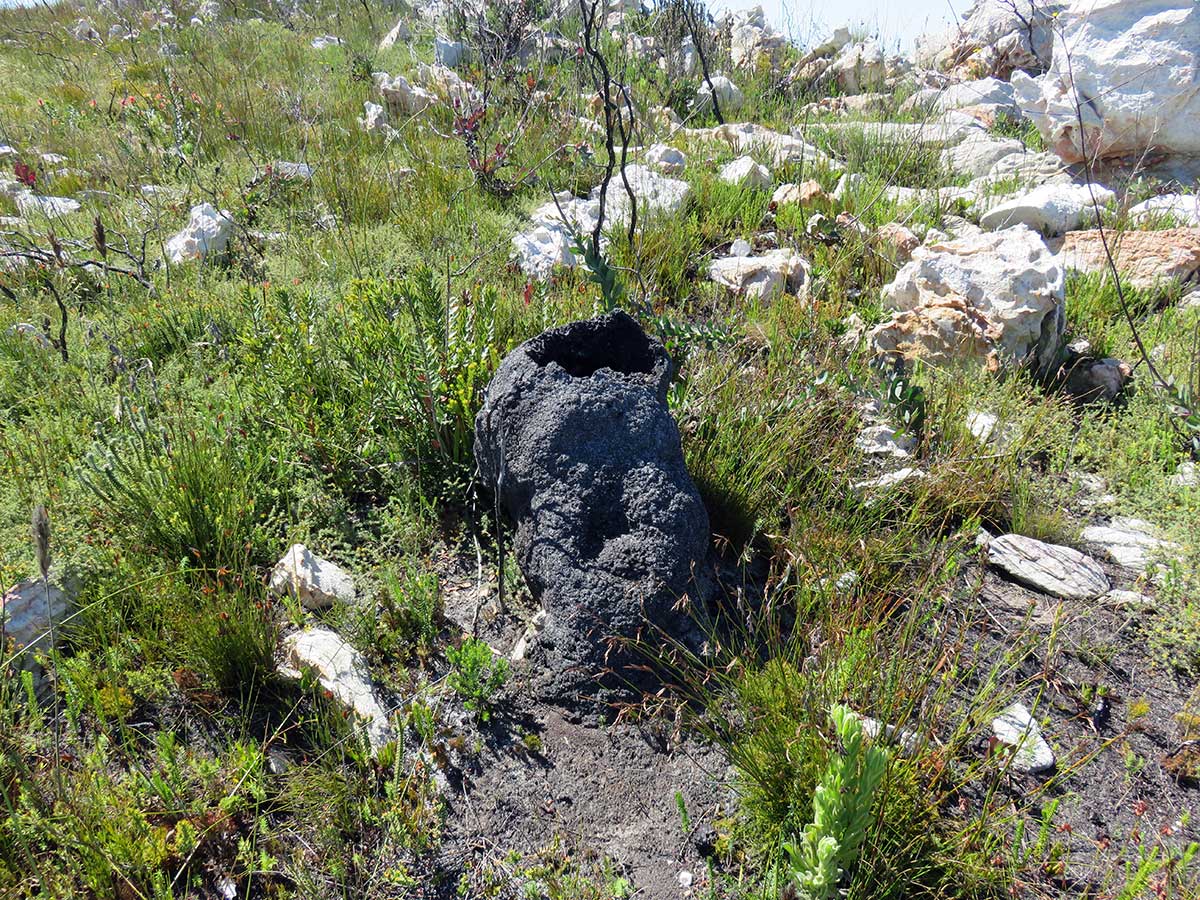 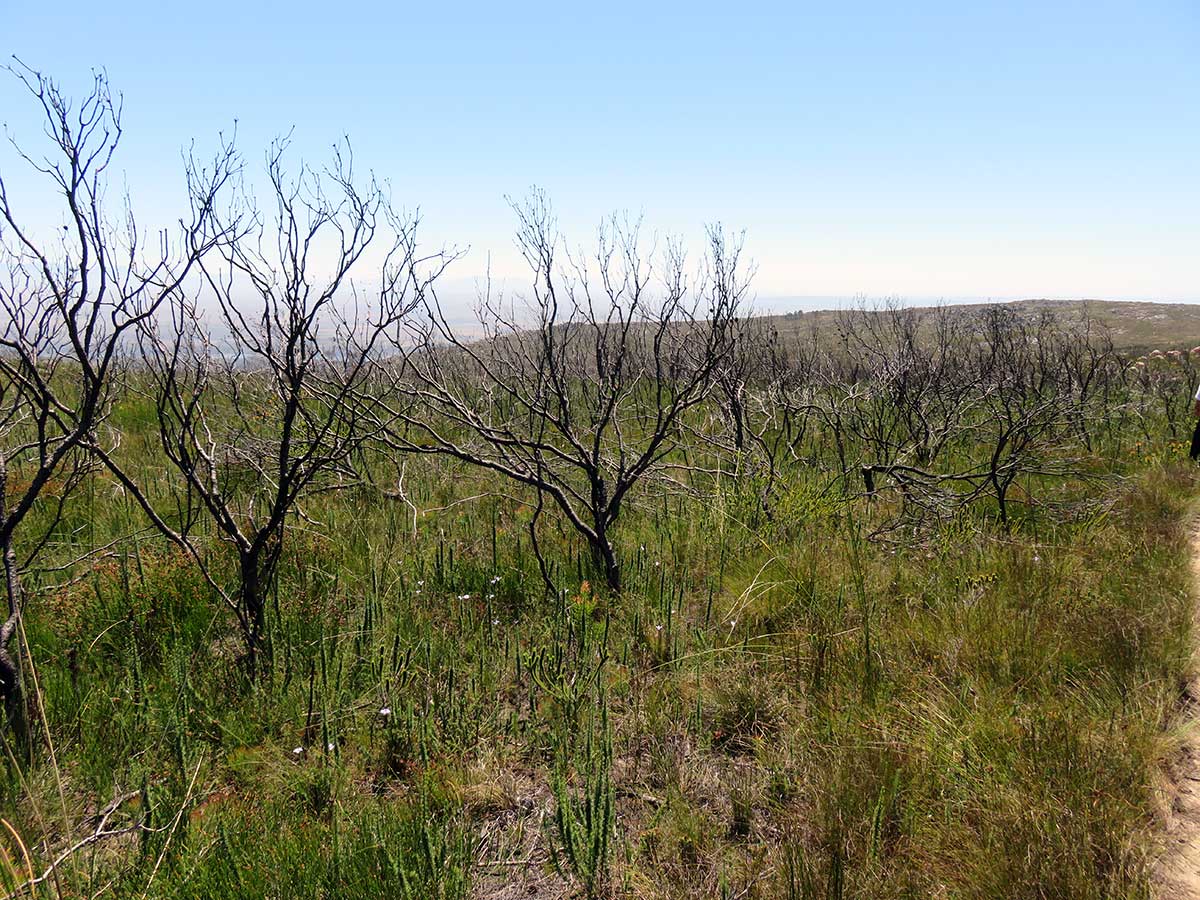 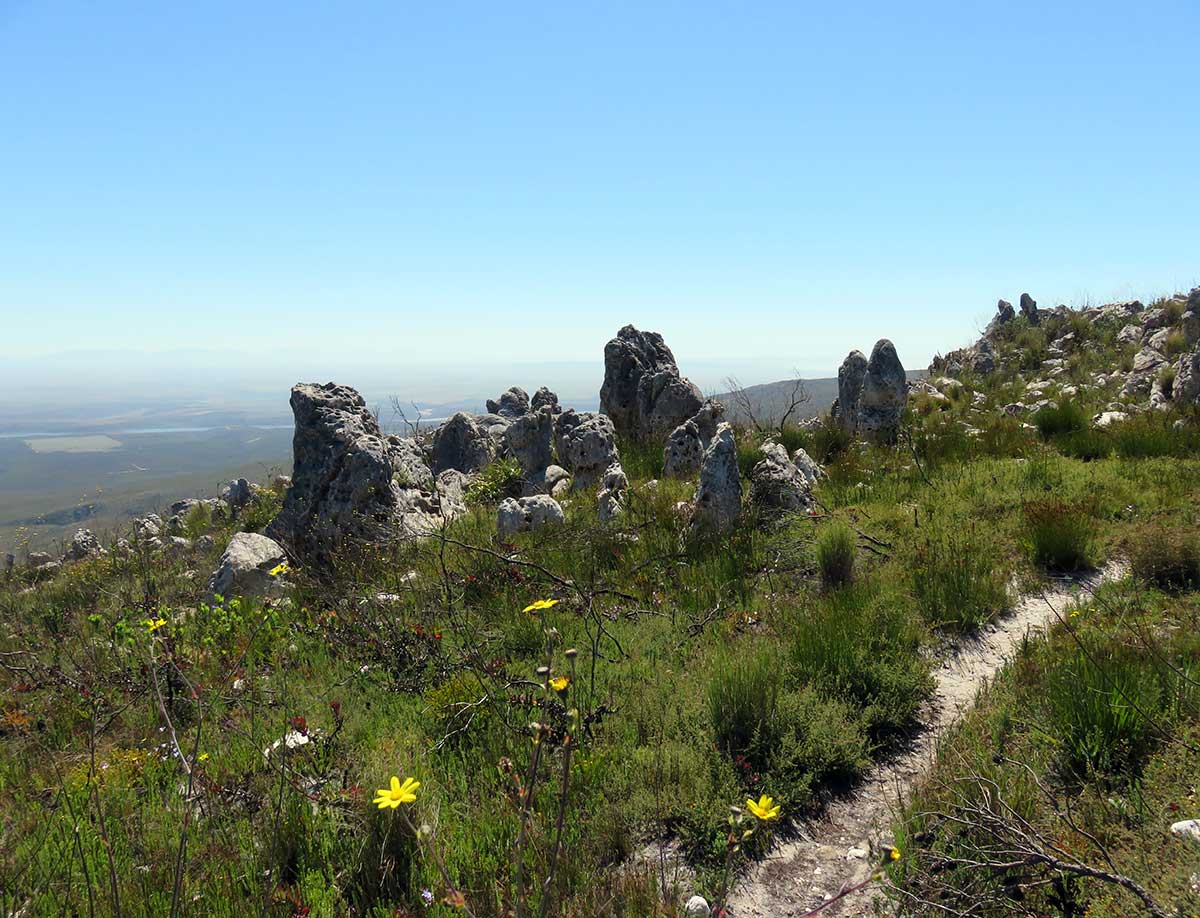 Around the 8km mark we started to get hungry and looked for a spot to enjoy some lunch. Unfortunately there was no shade in sight, so we had to settle for a good view instead. We stopped for lunch at viewpoint 5 which gave us a great view of the ocean and what we suspected was the bay where the Noetsie hut was located. 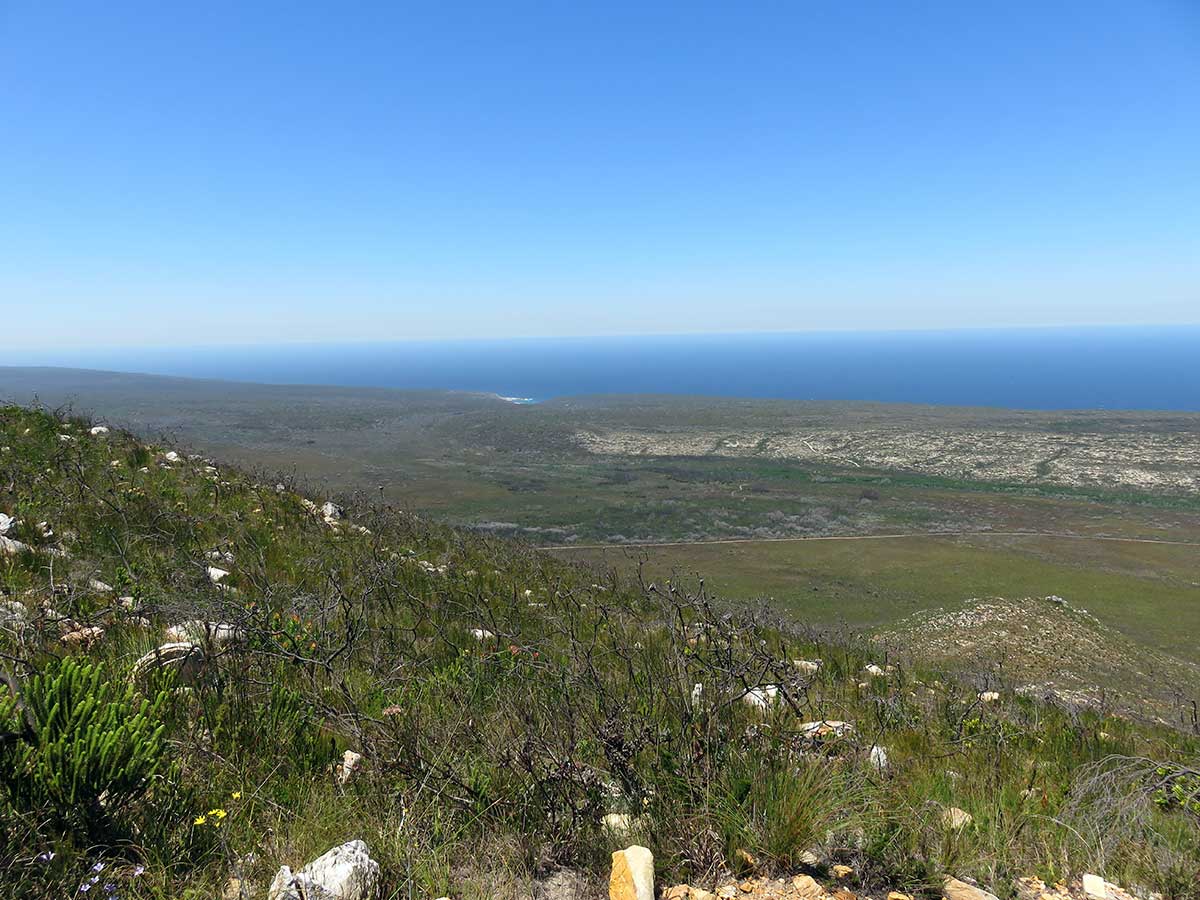 You can just about see the bay on the left.

After lunch we had to face the rather steep descent to a rough rocky road. Eventually we cut across the gravel road that is used for maintenance vehicles. Once across the road it was time for another change of scenery. We suddenly found ourselves on a fairly flat path surrounded by low trees. 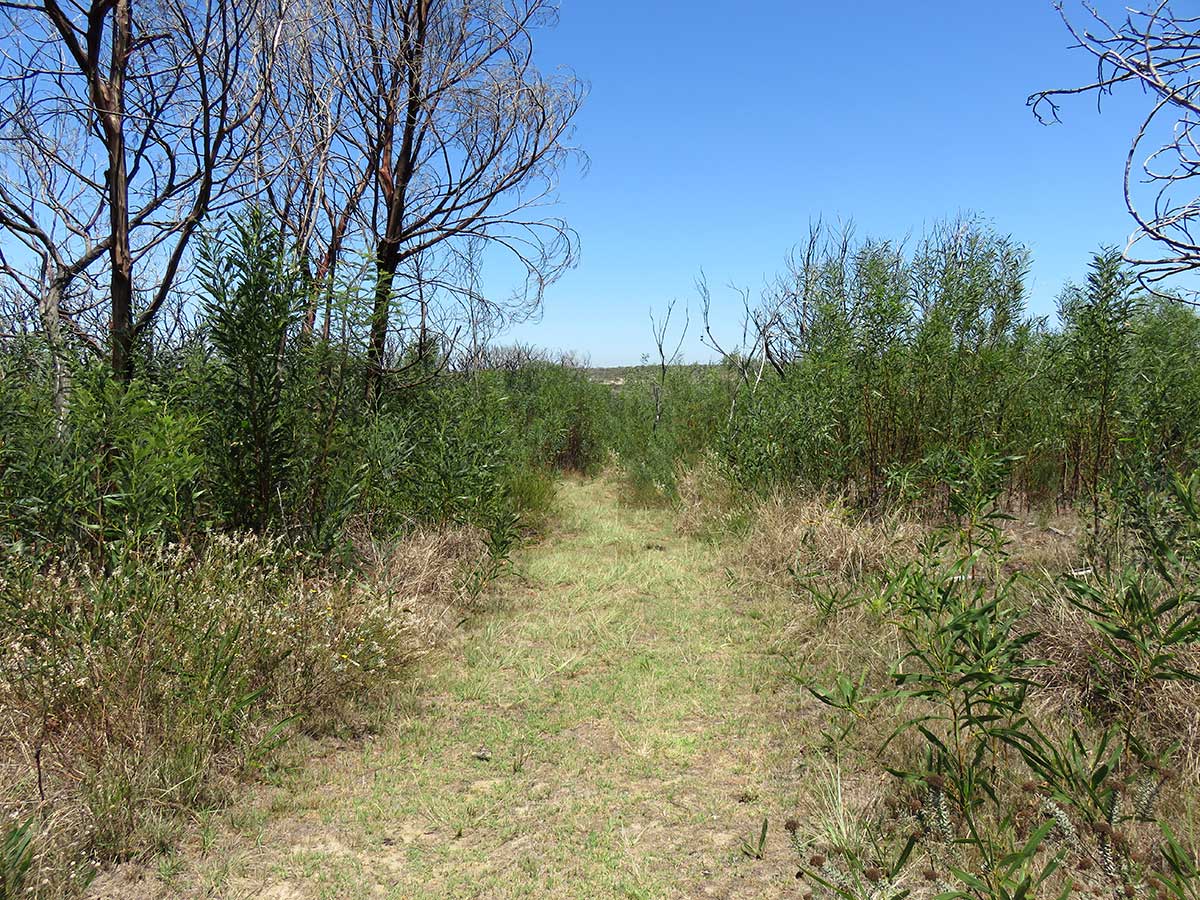 Eventually we emerged from the forest and started climbing again. The floor here is a mixture of beach sand and limestone rock, very cool. At this point we could hear the ocean and were convinced that we were extremely close to Noetsie. We were wrong. After quite a bit of walking we finally spotted a glimpse of Noetsie. The problem was that there was a massive ravine in between us and the hut and the only way to get to the other side was an extremely long walk around along the cliff. Once we got to the ocean side of the ravine we were rewarded with some stunning views. 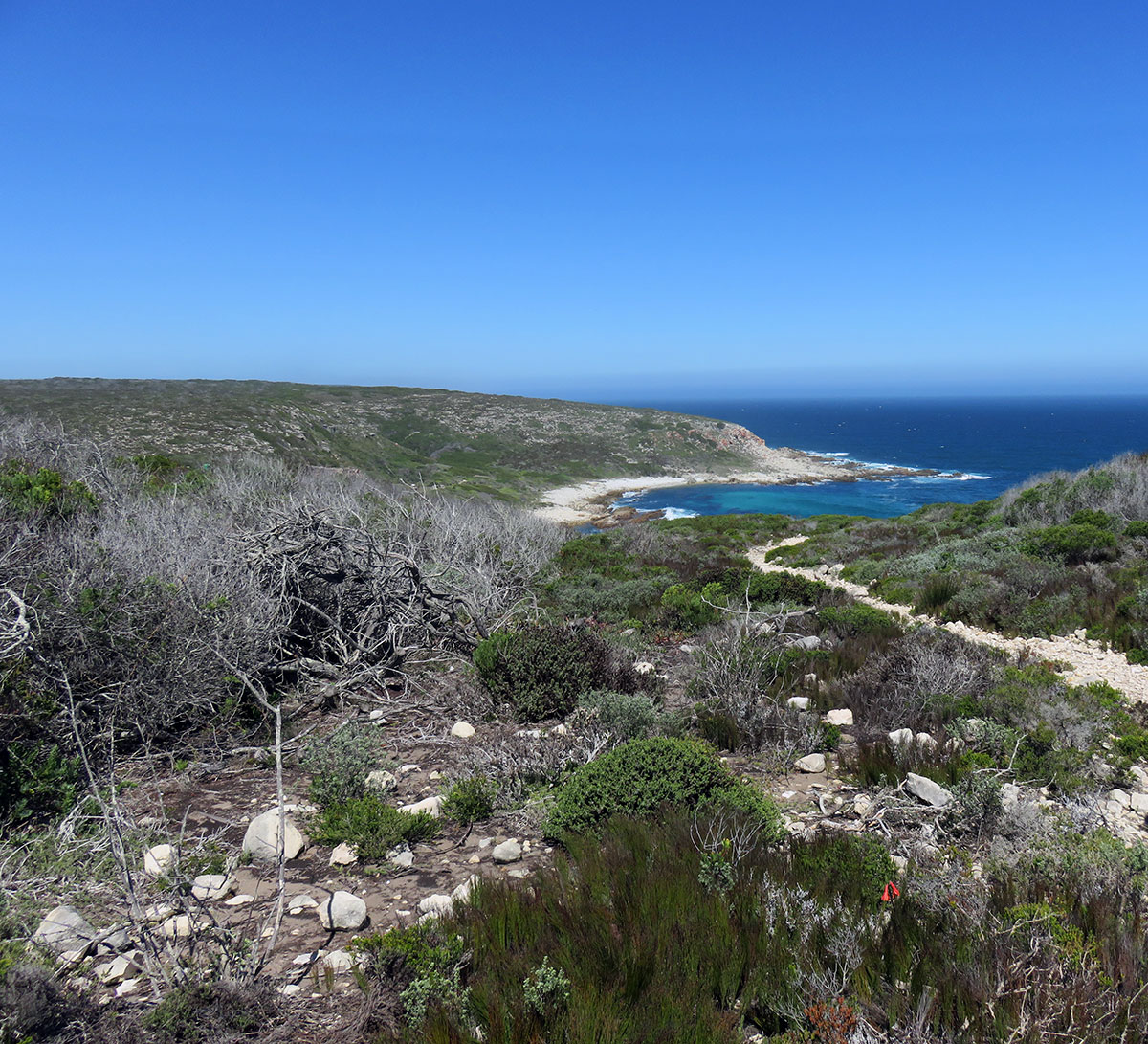 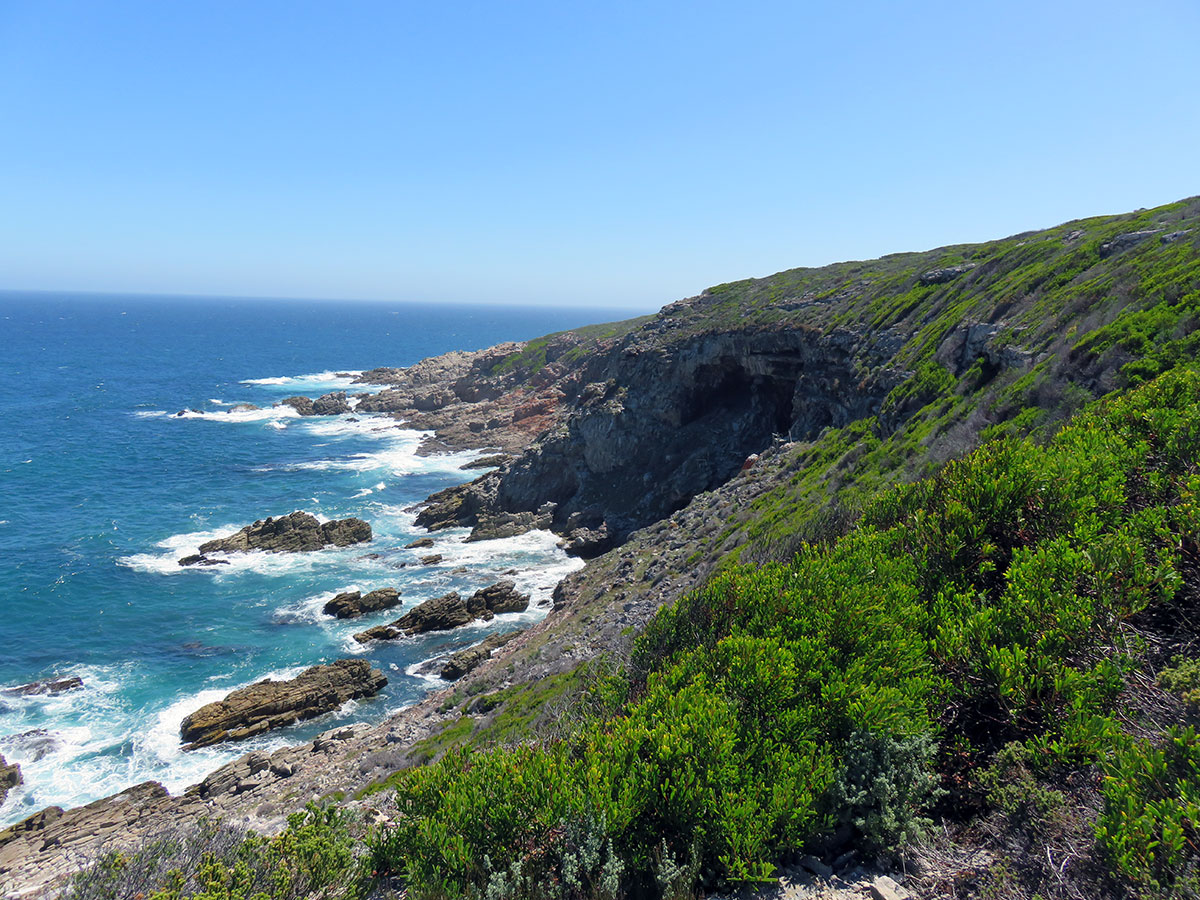 The thoughts of relaxing while watching the waves in this beautiful bay carried us down the rather steep descent and along the tricky rocks to the Noetsie hut. 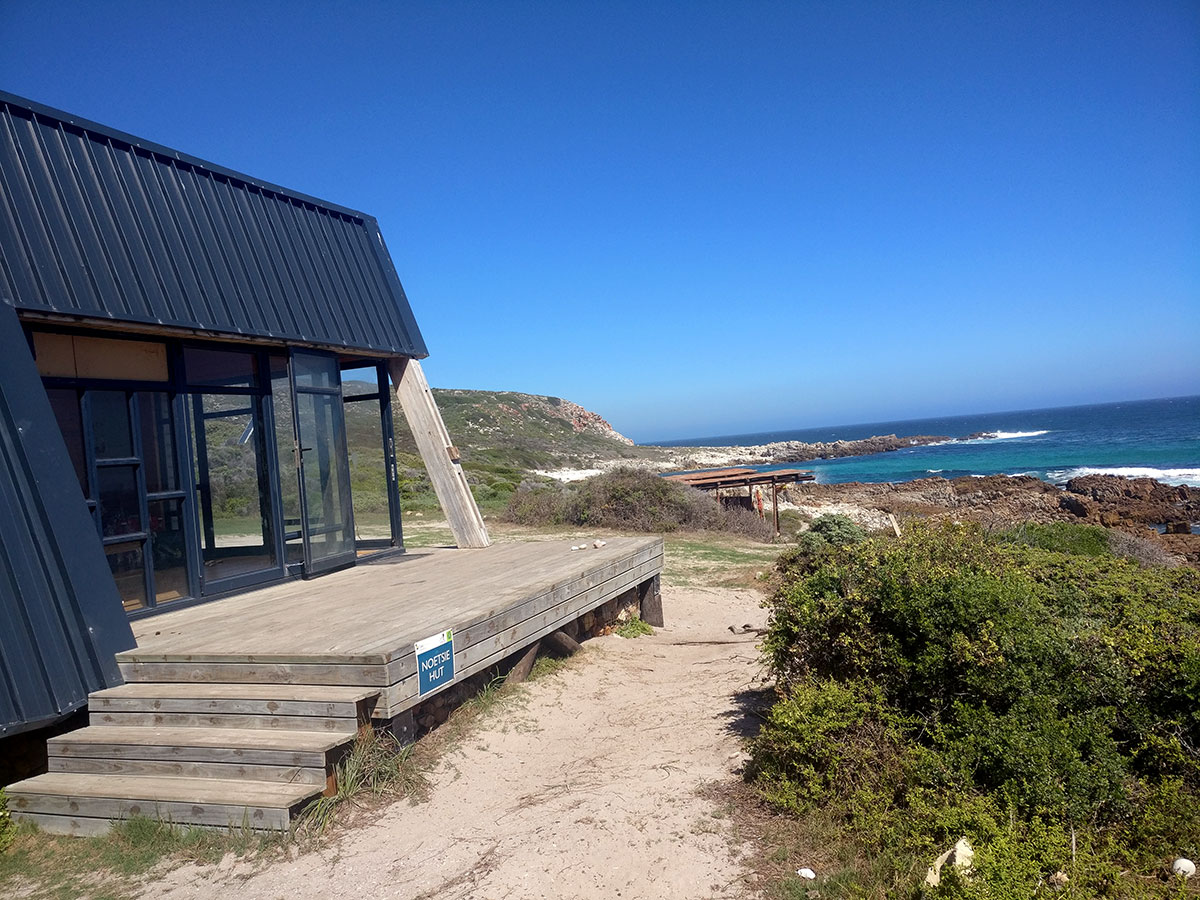 The second day was a lot less hectic than the first, but the combination of heat and lack of shade made it tough. We had a 45 minute lunch and hiked for just over seven hours. 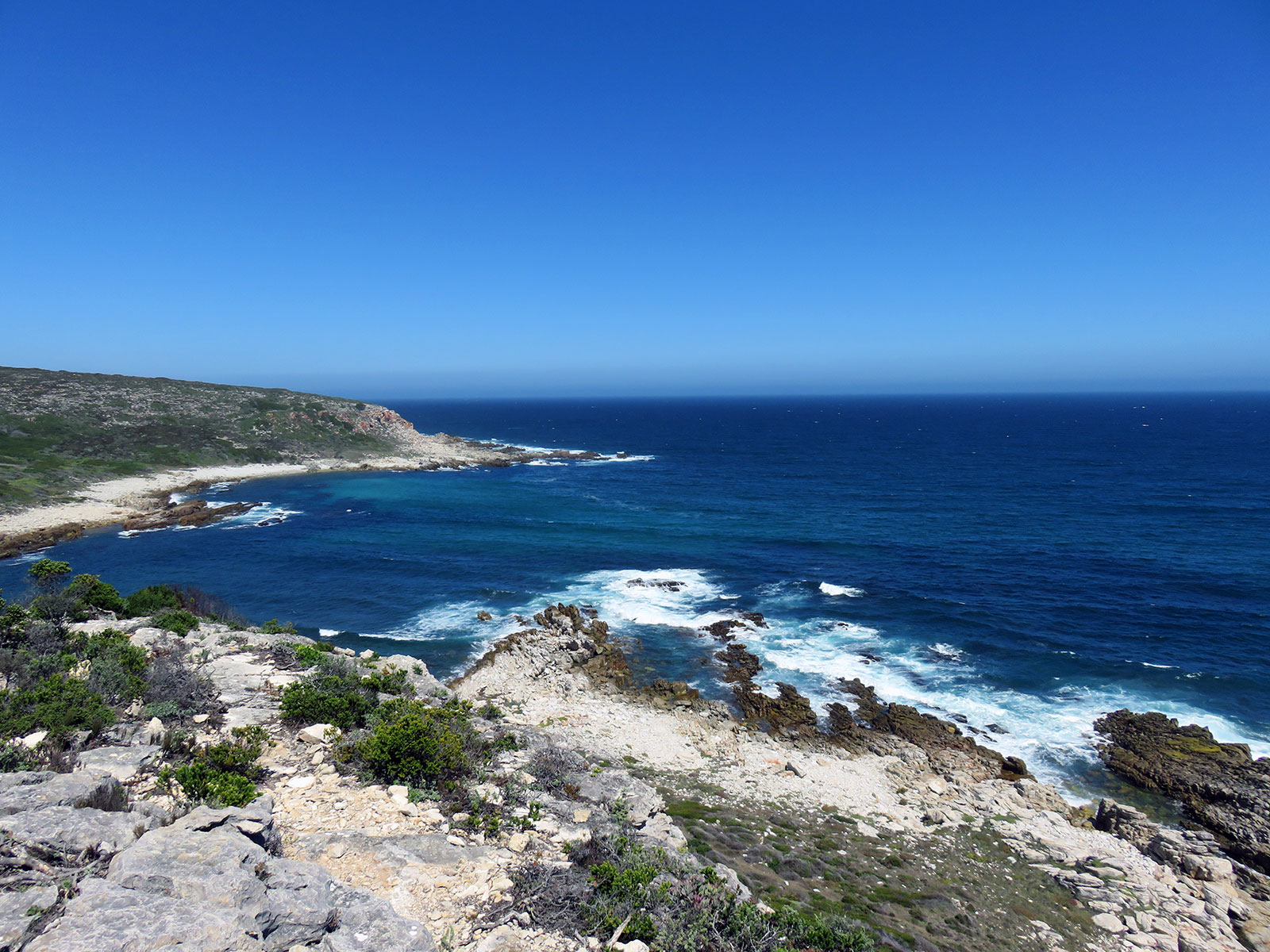