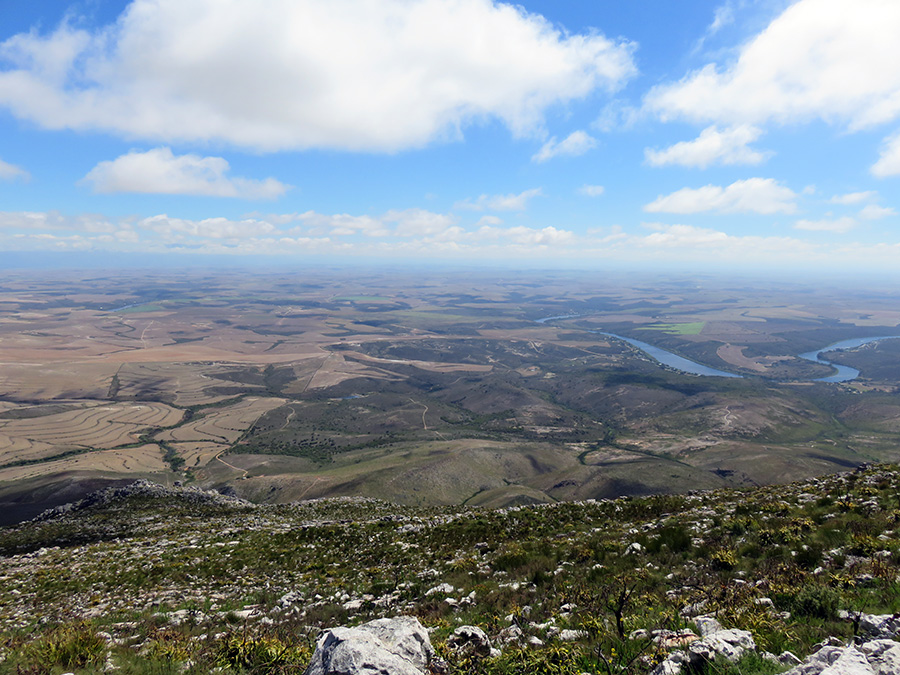 We booked our spots on The Whale Trail what feels like forever ago. The time had finally come to take it on.

Most of the recent hikes our group has been doing has been in preparation for carrying our hefty bags for five days while hiking 55km over various terrain. The trail has a bit of everything: mountains, rocky cliffs, beaches and forests.

Hikers taking on The Whale Trail have the option of having their luggage transported from hut to hut. Each 60L container has a cost associated with it and can be substituted with a cooler box. Our group of five opted to have two boxes transported, one cooler box and one 60L container. If you’re considering taking on the whale trail I would suggest considering taking three containers per group of five hikers, we sometimes ran into space issues and had to pack the excess into our already heavy bags.

After taking on the long drive from Cape Town to Bredasdorp we headed onto the gravel road off the R319. After around 60km on the gravel we came across the entrance to the De Hoop Nature Reserve. 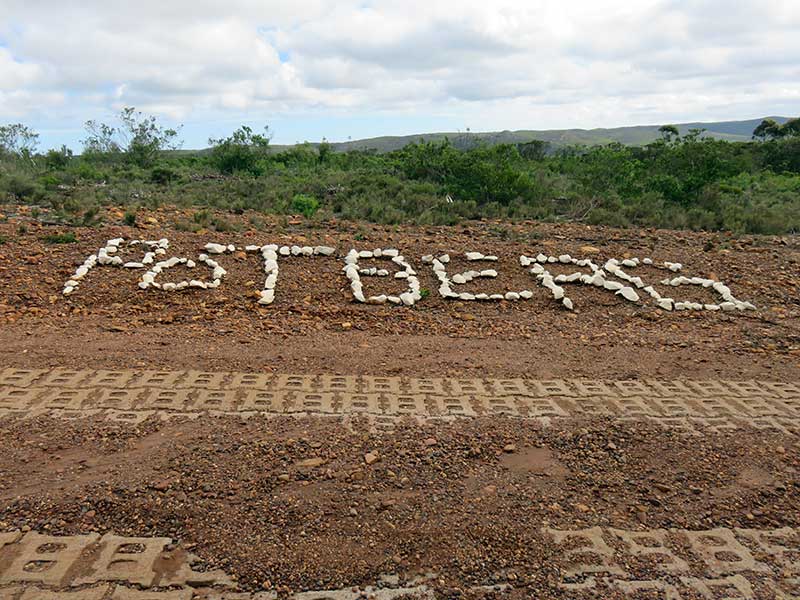 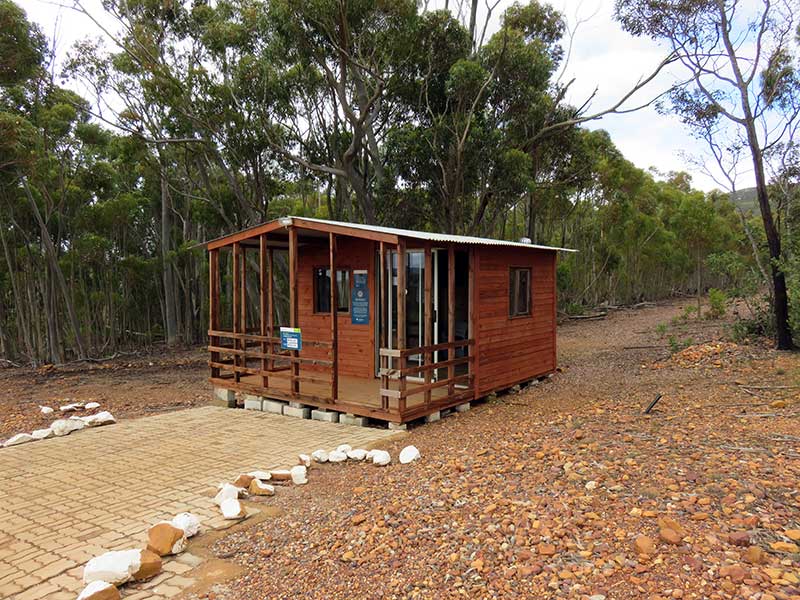 At the entrance we found a small security hut and were then directed to the Potberg hut where we spent the first night before hiking.

We found the Potberg hut to be quite well equipped. It has electricity as well as a fridge in addition to the amenities offered at other huts. Each hut has cutlery, cookware, beds (without bedding) and at least one fireplace with sufficient wood. 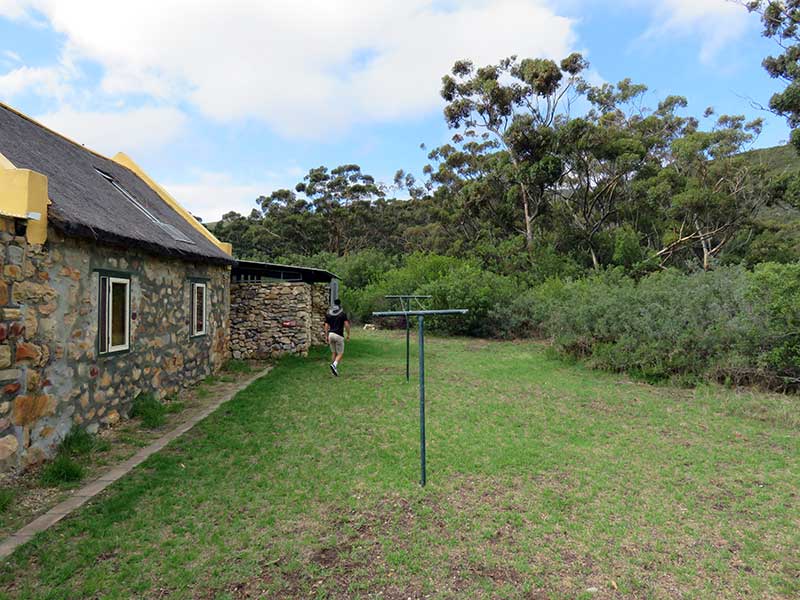 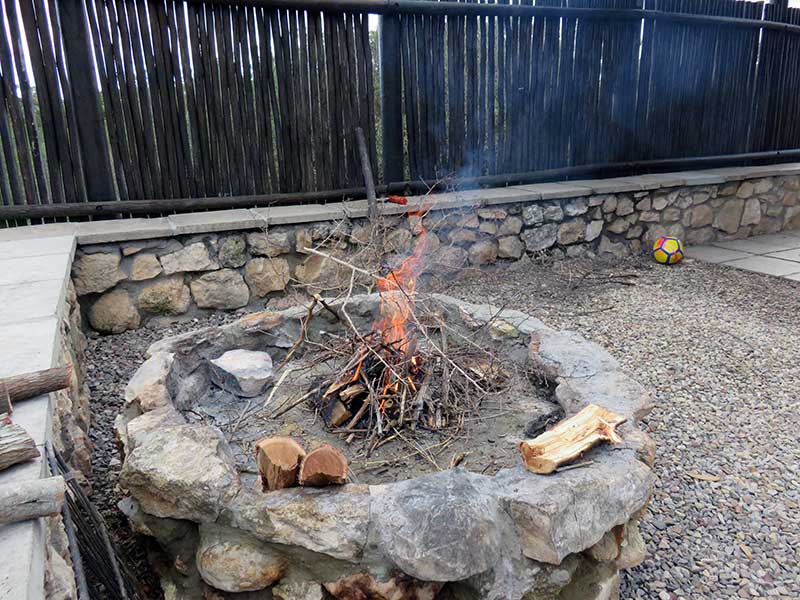 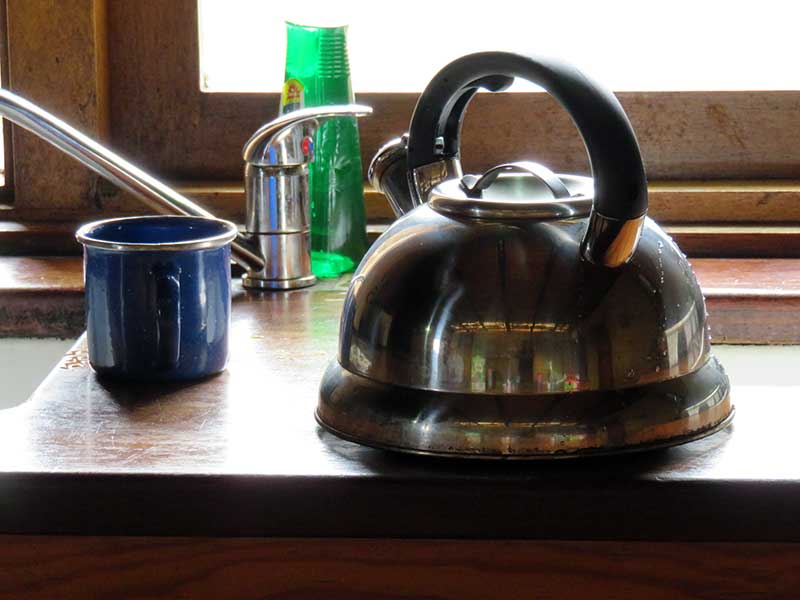 We had a braai and enjoyed the first night out in nature before getting an early start the next morning. The first day of hiking is the most strenuous and is estimated to take around 8 hours. The trail starts just behind the hut and starts with a pleasant stroll through the forest under shade. At the start there are lots of route markers to get you going but they become a lot sparser as time goes on. 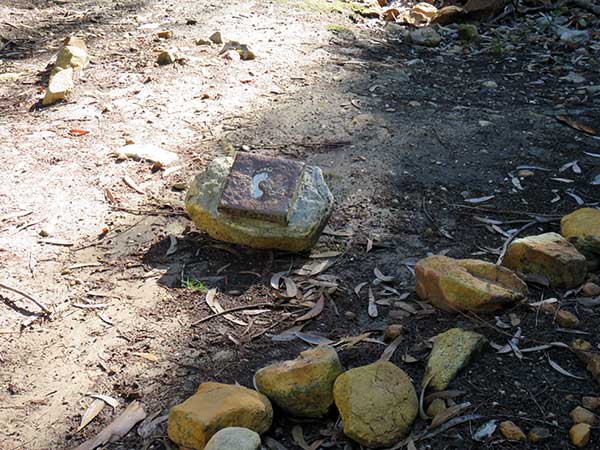 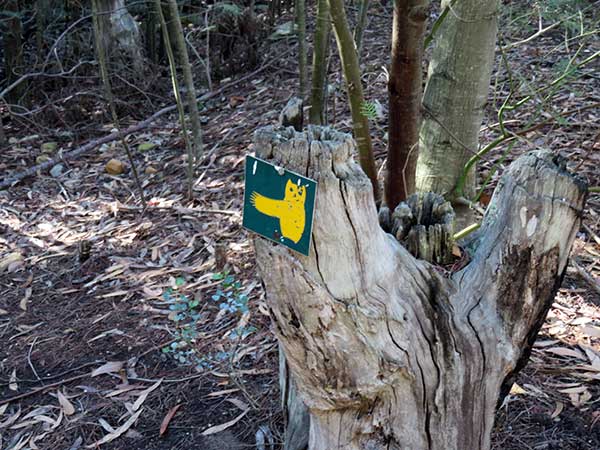 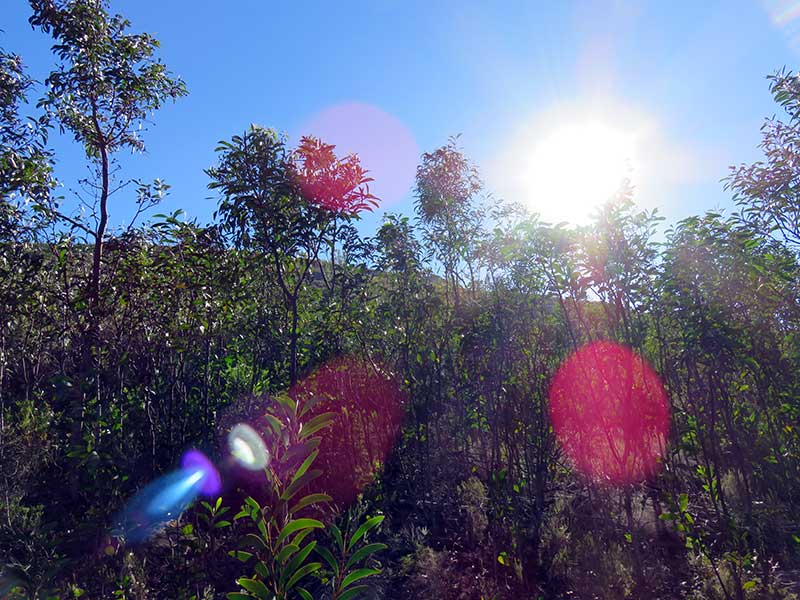 As the forest thins out you reach a small stream with some wooden beams to cross over it. 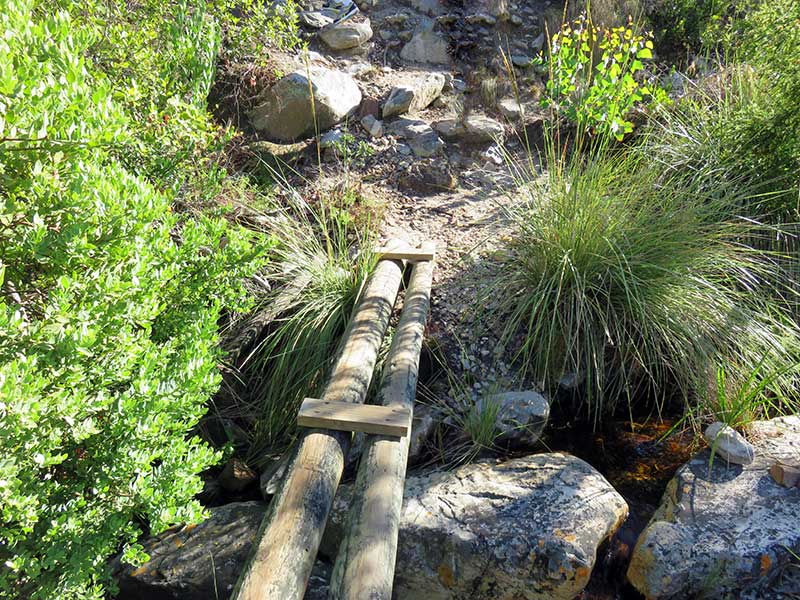 As you climb higher you get a good view of the source of the stream as well as some great views of the surrounding mountains. 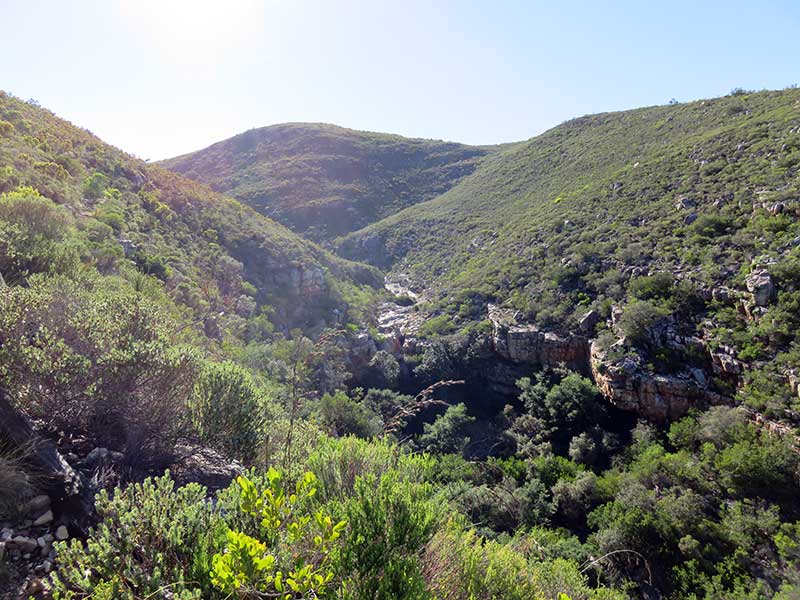 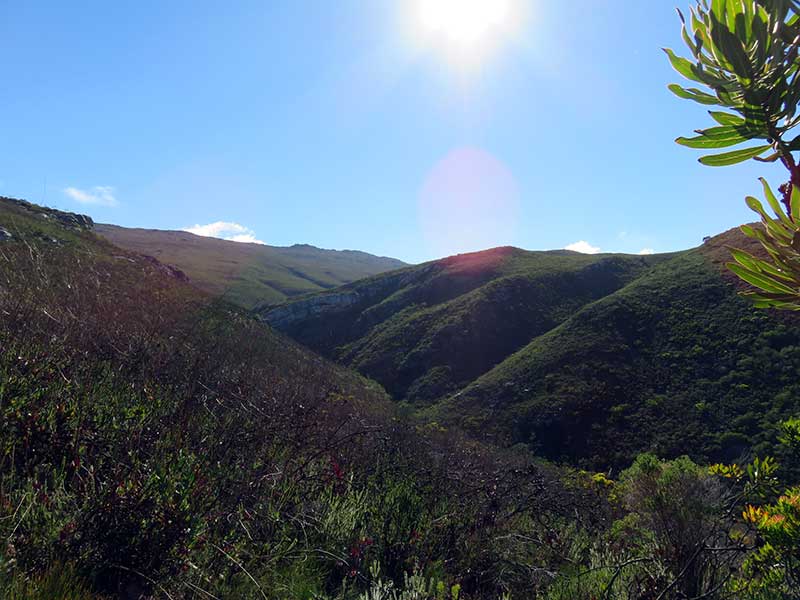 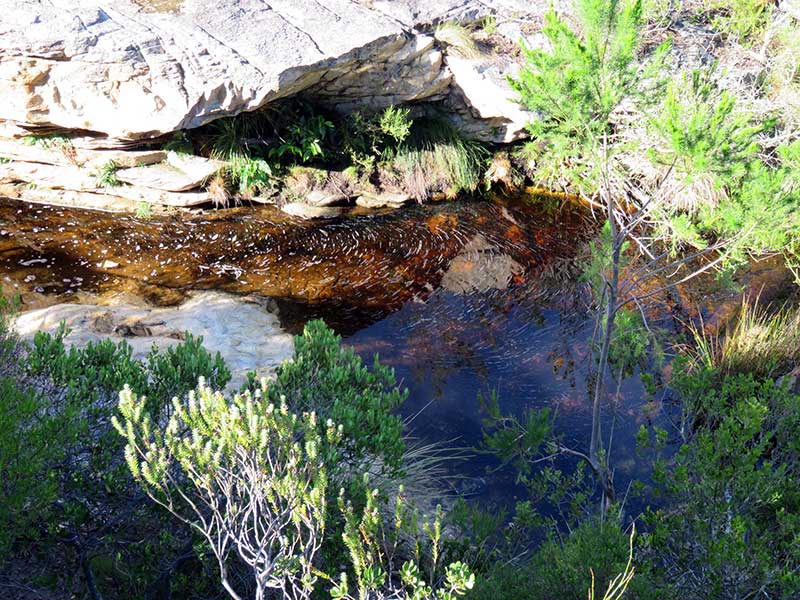 The climb is quite strenuous here, especially if your bags are weighing you down. There is lots of unique fynbos to take your mind off of the difficulty. 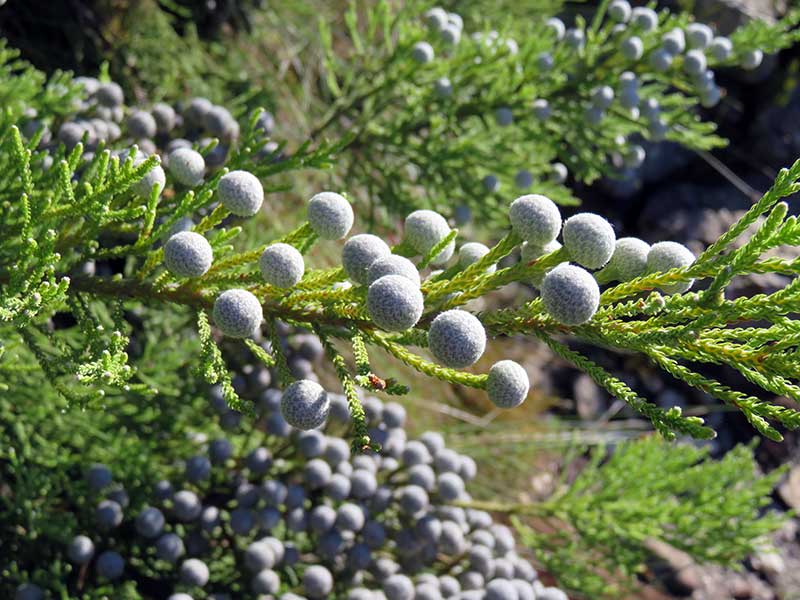 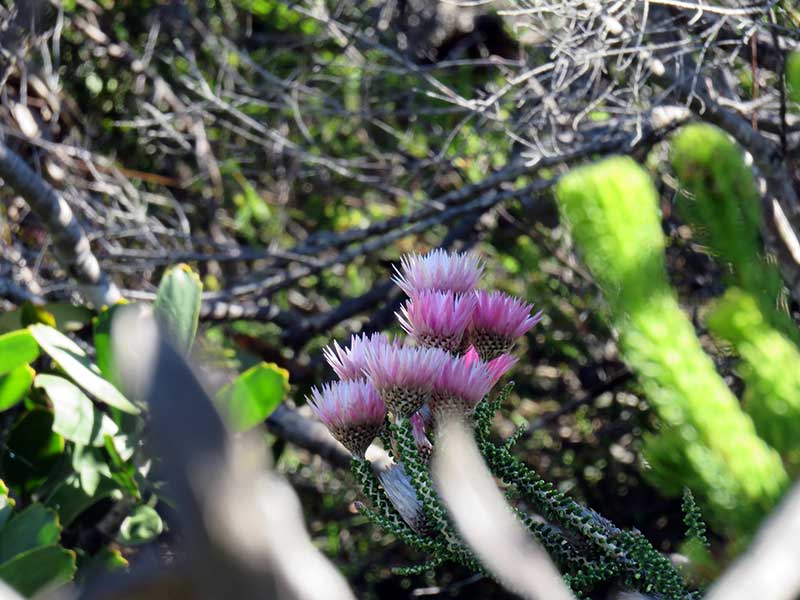 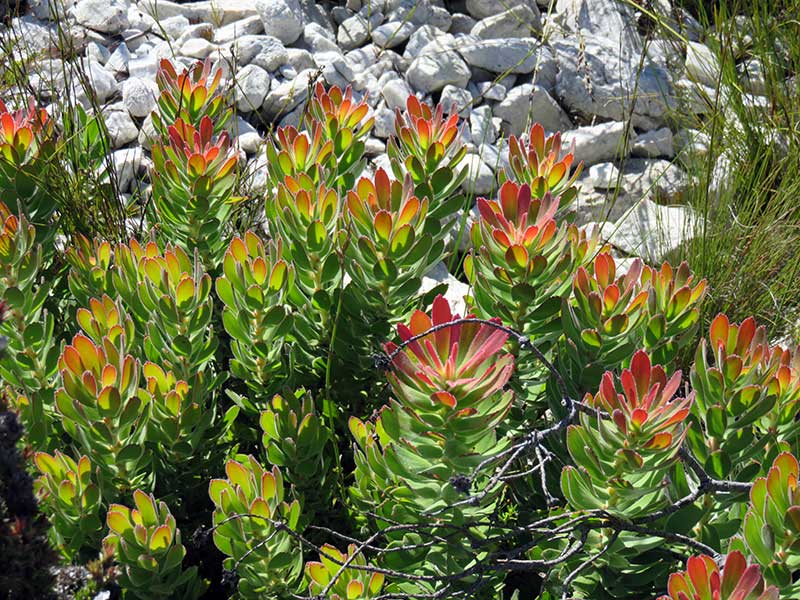 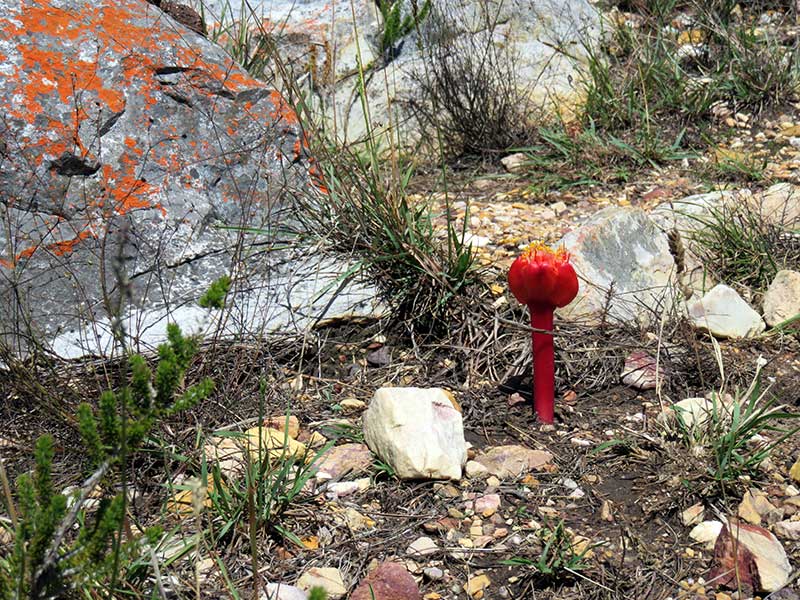 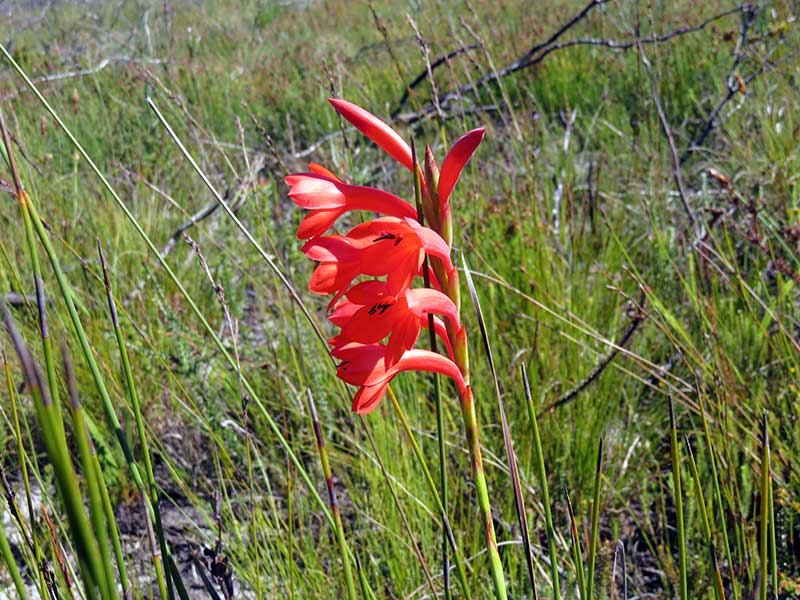 Eventually you will reach a fork in the road. Keep following the Potberg trail to the left and after some more strenuous climbing you will reach the 611m peak. The peak is a great place to break after the hectic climb as it offers great views of Cape Agulhas off in the distance as well as of the Breede River. 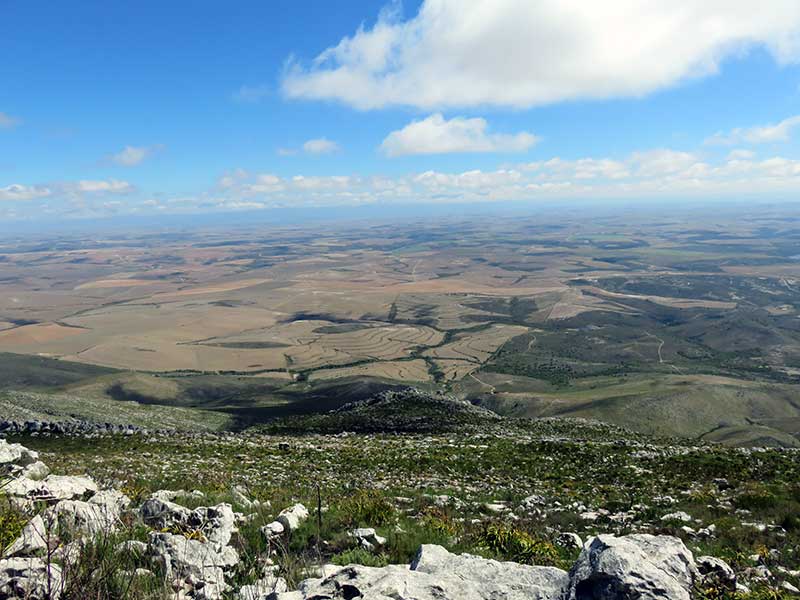 Just after the peak you will come across a rock shaped like a chameleon. So cool! 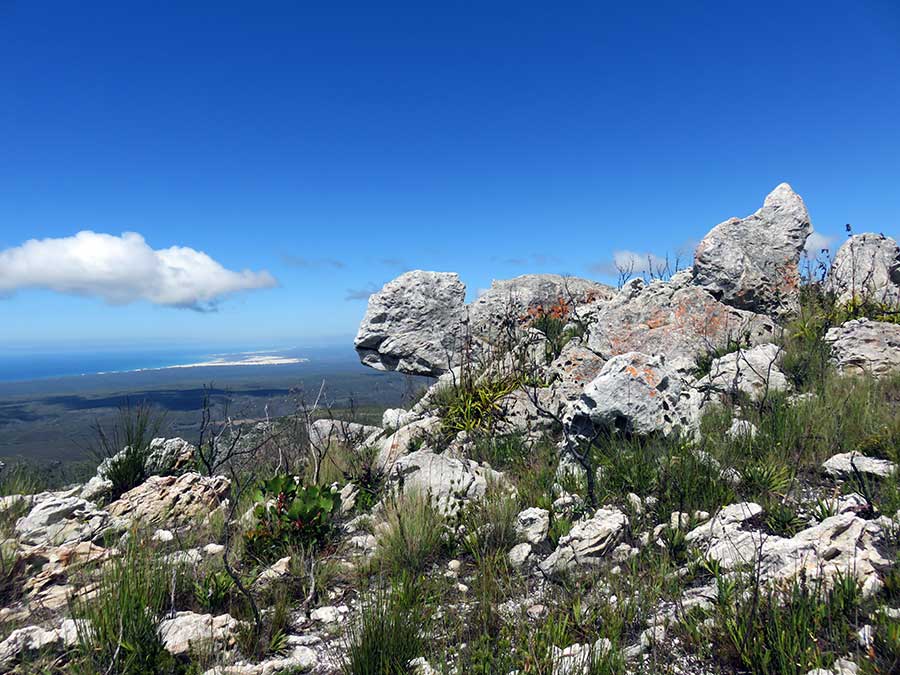 After the chameleon rock the path descends for quite a bit to the spine of the Potberg Mountain. Walking along the spine is quite cool as you get great views on both sides, but the wind started picking up a bit and we needed to rush a bit for fear of being blown off the narrow path. 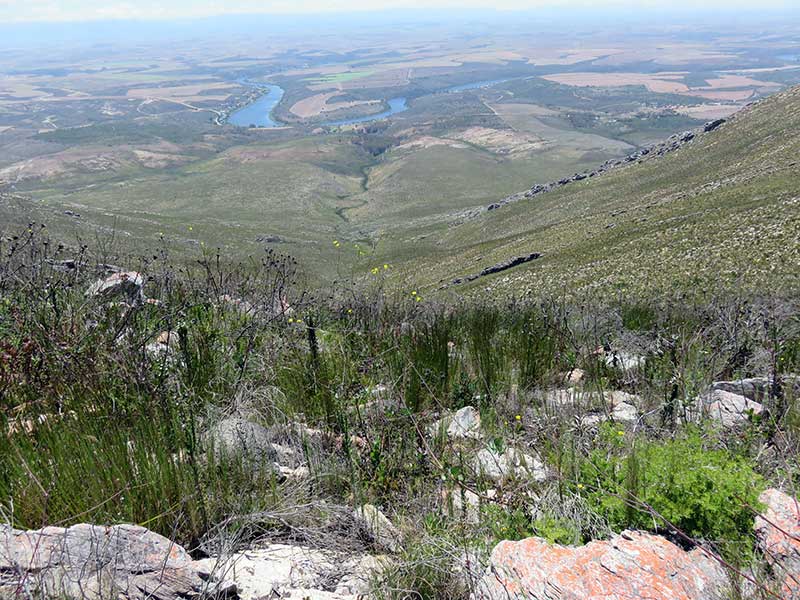 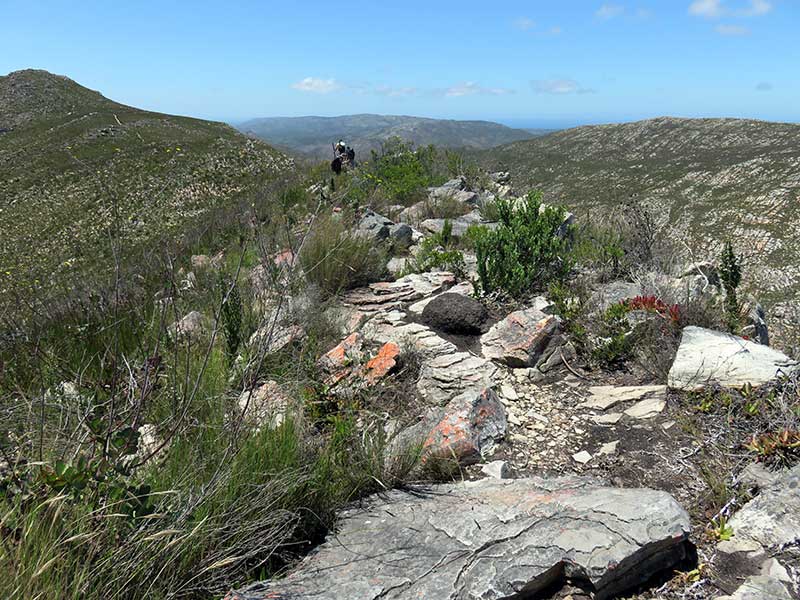 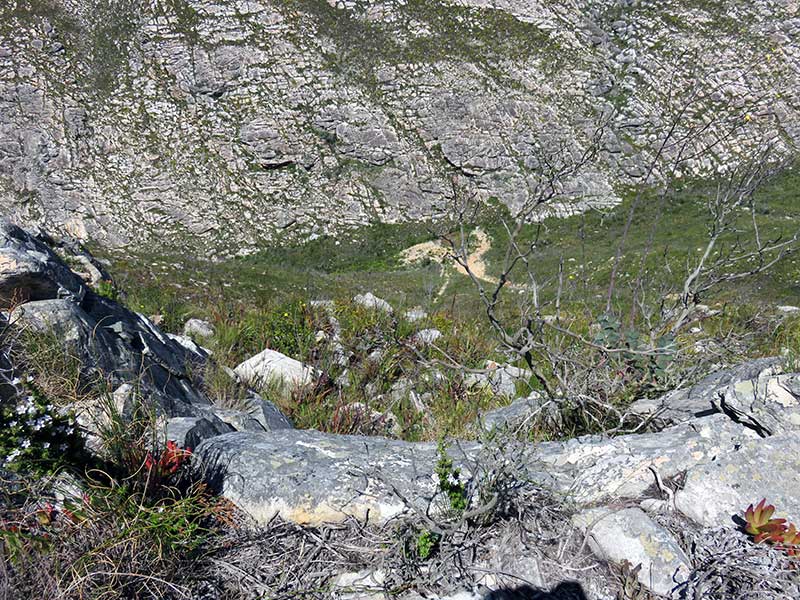 Once you clear the narrow part of the spine you will spot the 8km marker. It was around here that we stopped and pulled out the small gas stove we had with us to cook up some noodles for lunch. After the much-needed break we set off again, downhill this time. This was a bit tricky as the descent is quite steep along some difficult rocky terrain.

After the descent we reached a stream where we spotted some crabs and frogs chilling out. This is a great spot to relax for a bit and fill up your water bottles. 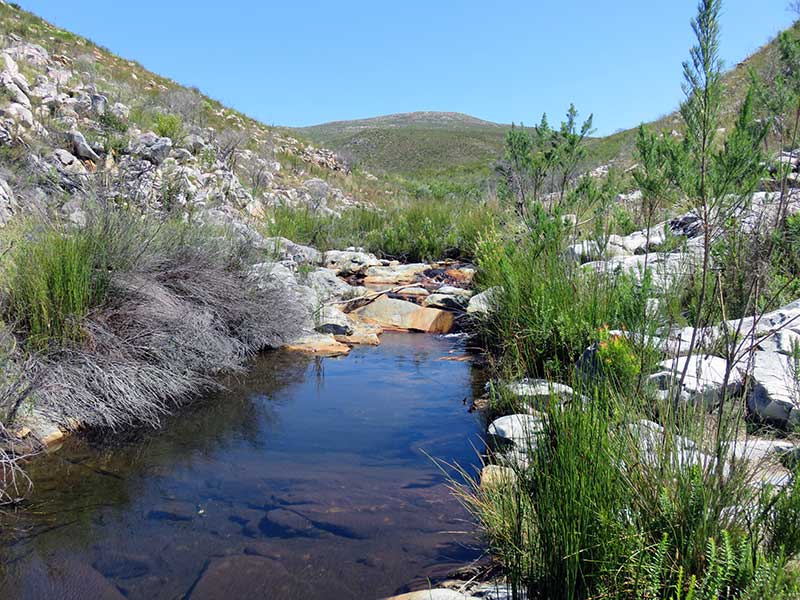 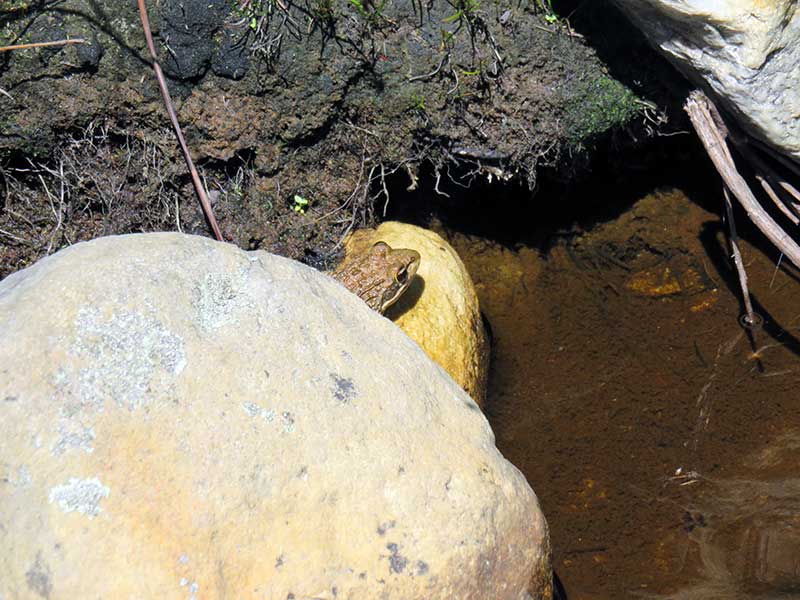 Just after relaxing at the stream we heard some baboons off in the distance. When we rounded the corner we spotted a large group up on one of the mountains around us. They were watching us quite closely and making lots of noise, so we thought it best to stick close together and pick up the pace.

With the faster pace we quickly left the baboons behind but we had to slow down again as the path started climbing again. By this point we were all quite tired, so we had to slow down to what felt like a crawl while climbing up to the 400m peak. Once at the top we spotted the 12km mark which helped raise our spirits a bit. This kept us going up to the 14km mark where we spotted a hut off in the distance. As we got closer to the hut we realised that it was the old, burned-down Cupidoskraal hut. Once we reached the old hut we spotted a sign directing us into the forest to the new hut. The 400m to the hut felt like it dragged on forever as we were all exhausted by that point, but we eventually got to a clearing in the trees and spotted the new Cupidoskraal hut. 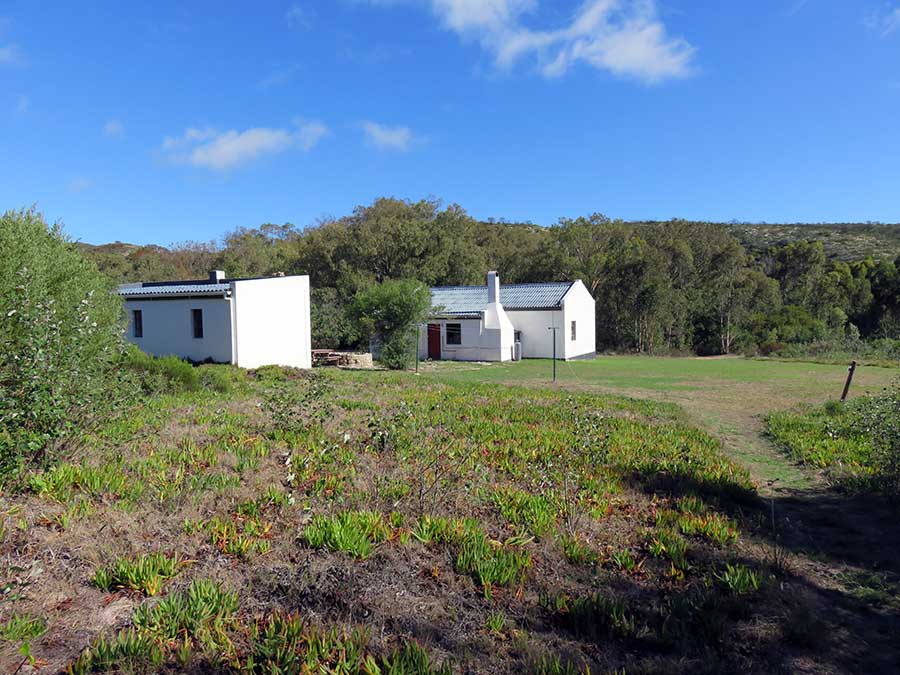 The first day was really rough since our bodies were not used to carrying such heavy bags over such long distances over such difficult terrain. The route took us just under nine hours with around an hour break for lunch and a bunch of other stops along the way. 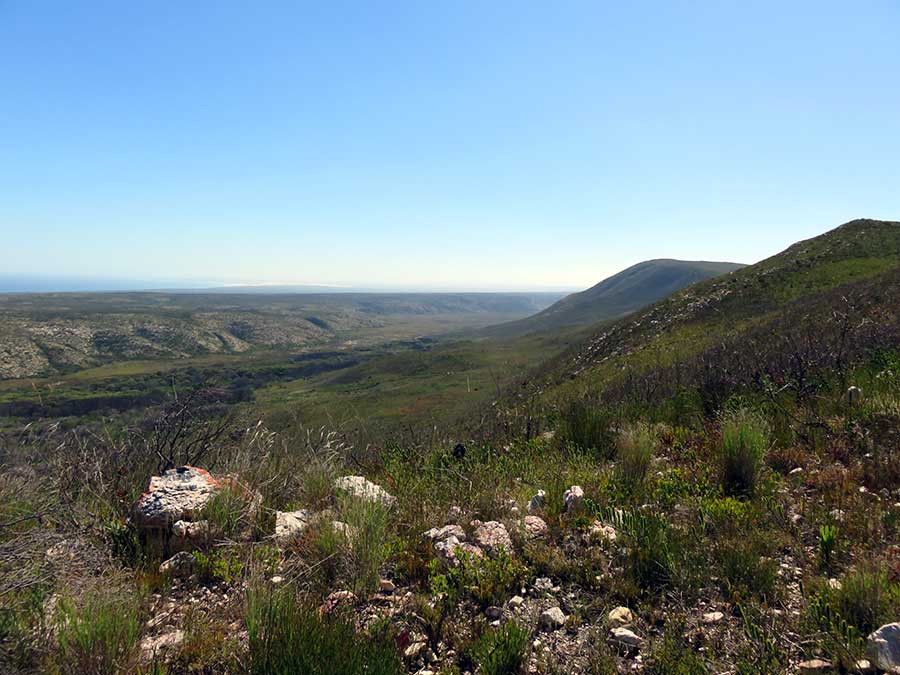