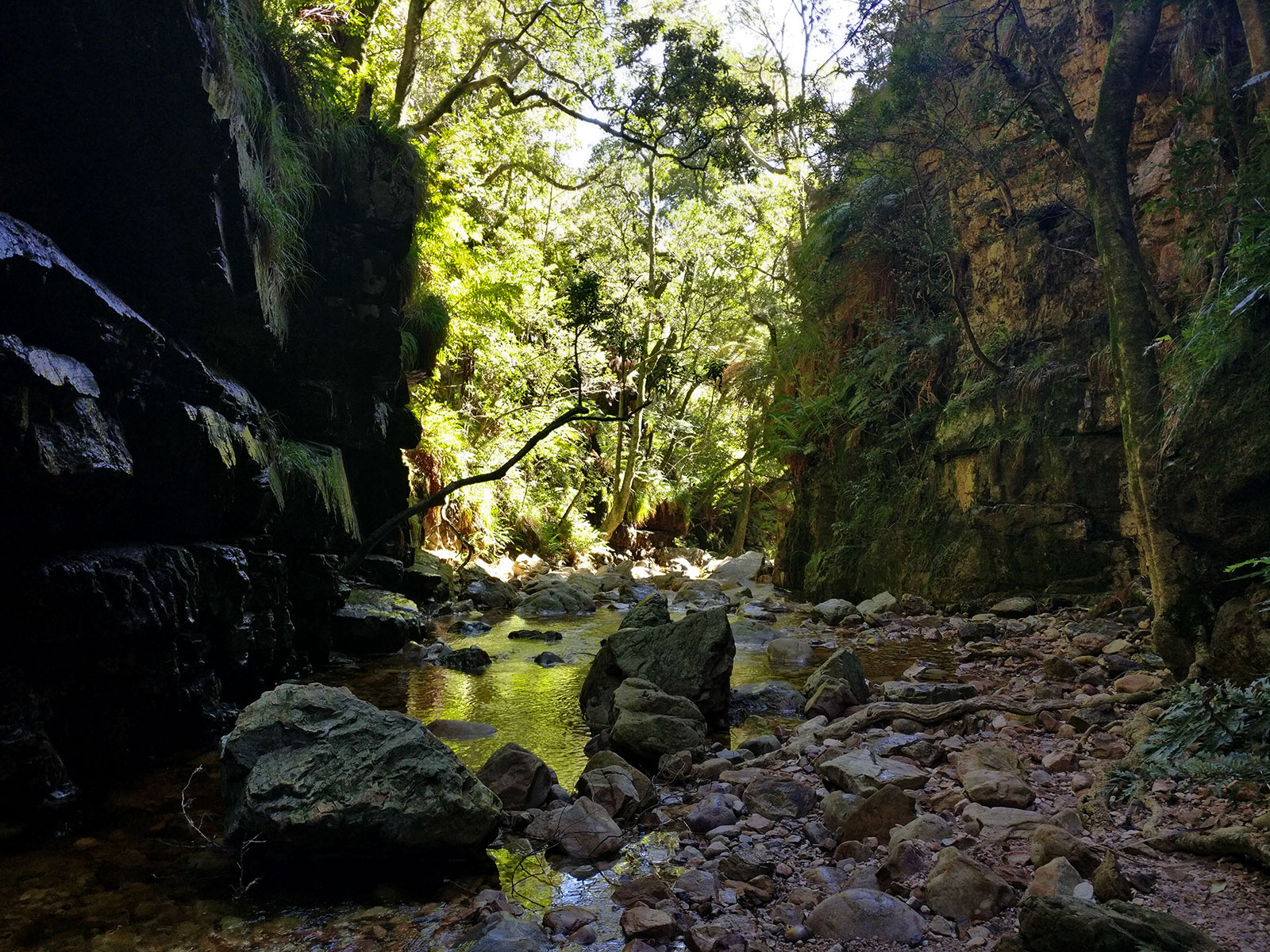 With two large waterfalls to see, a river to cross and rock pools to swim in,  the Tweede Waterval trail is the perfect hike for Summer.

I’ve been eager to hike the Tweede Waterval trail ever since a colleague of mine showed me some great pics of the waterfalls (thanks Carel!) but a combination of the weather forecasts and group availability has been keeping us away. Thankfully we finally managed to organise quite a large group to meet there on a beautiful Sunday morning.

At the entrance to the reserve we stopped to pick up day permits at R40 per person. Each group also got a lovely map which details all of the routes available at the reserve.

After the gate you will need to travel an additional 5km along some fairly rough gravel roads, so be prepared! We saw quite a few groups walking the 5km to the start of the trail instead of driving. This is my recommendation if your car is unsuitable for rough terrain. We drove to the start and it was quite slow going. At 5km in you should see a bend in the road signalling the end of the circular route. This is the start of the Tweede Waterval route. There isn’t a lot of parking available close to the trail start, so try and arrive early if possible. 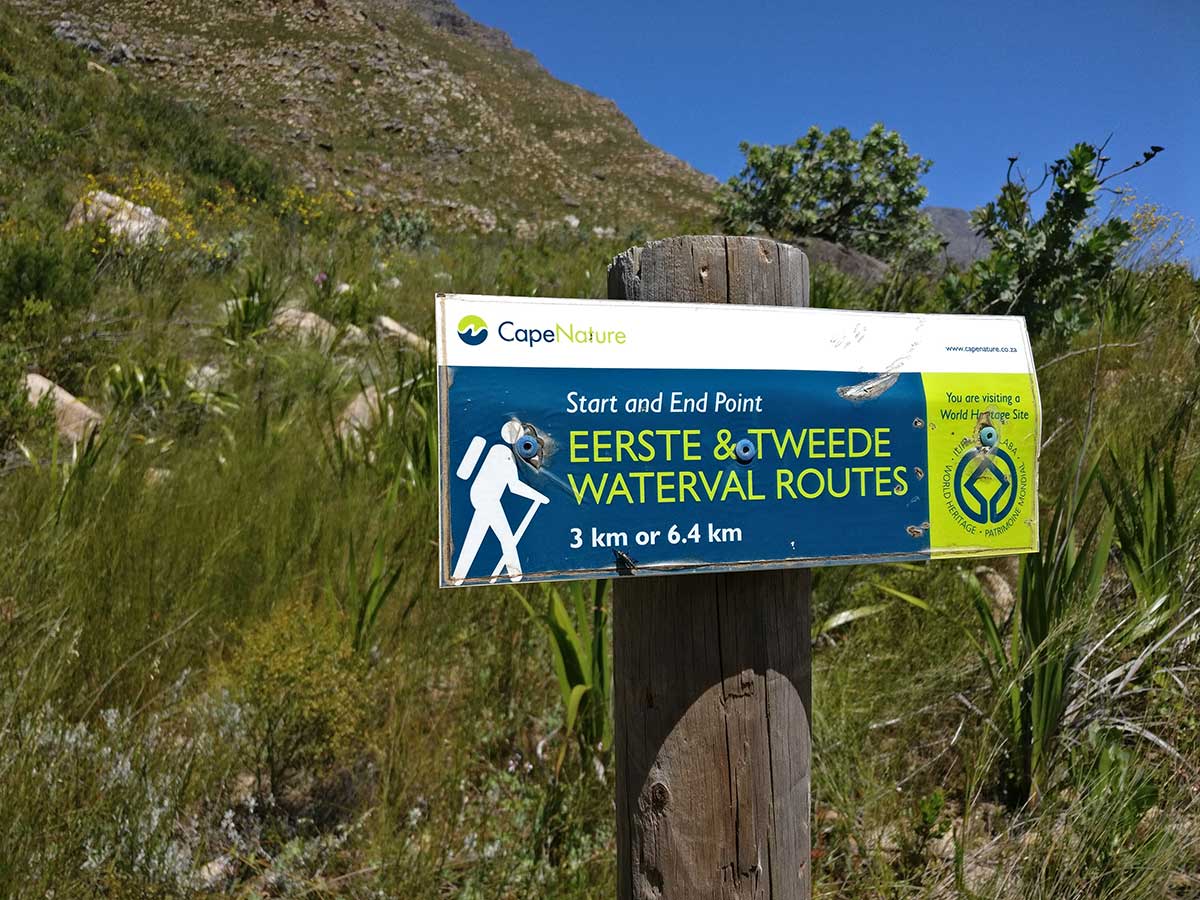 The trail starts with a quick ascent then a walk along some rocky terrain. Walking along this section offers amazing views of the mountain ranges around you. 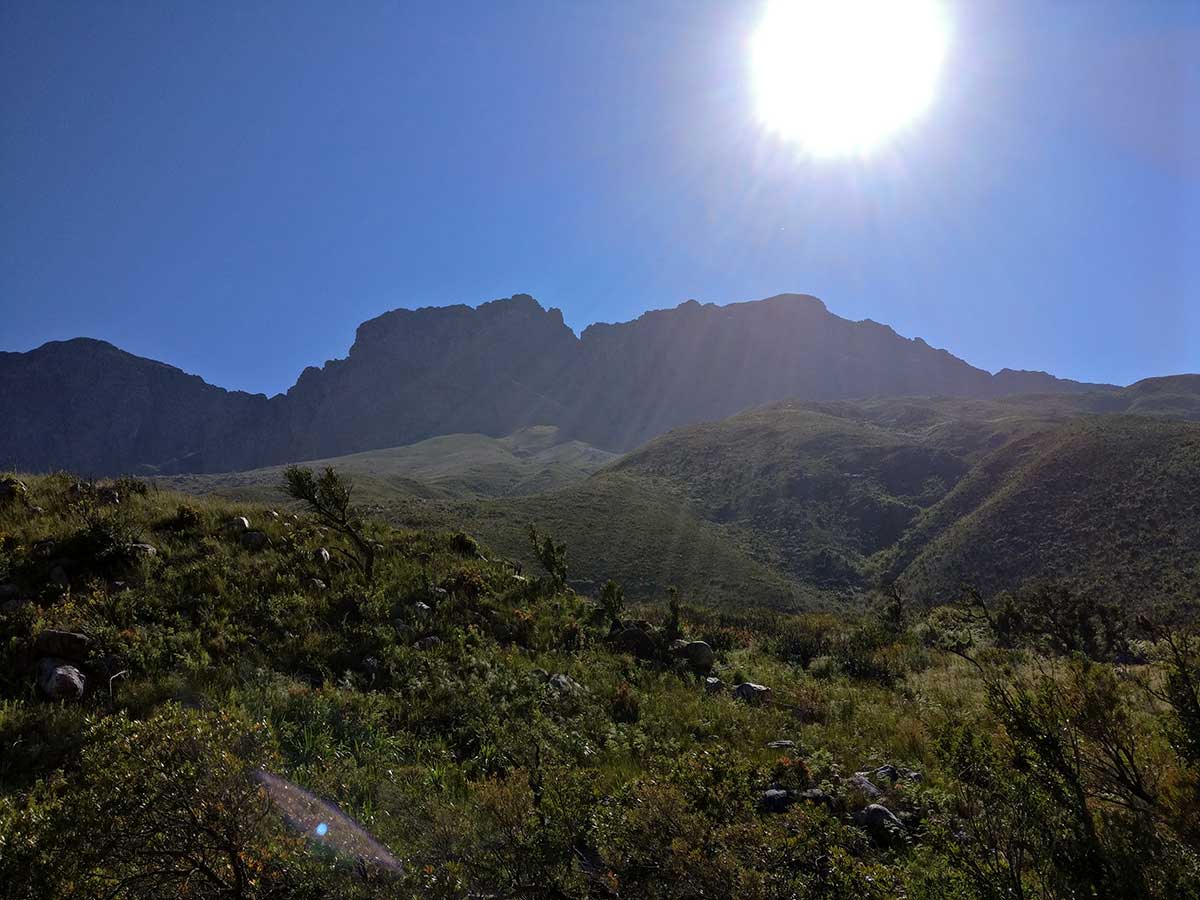 After about a kilometre of walking you should notice a waterfall tucked away in the cliff on the right. This is the first of the waterfalls you will encounter. There is a fork in the road up ahead. Right goes toward the waterfall and straight on is the path to the second waterfall. 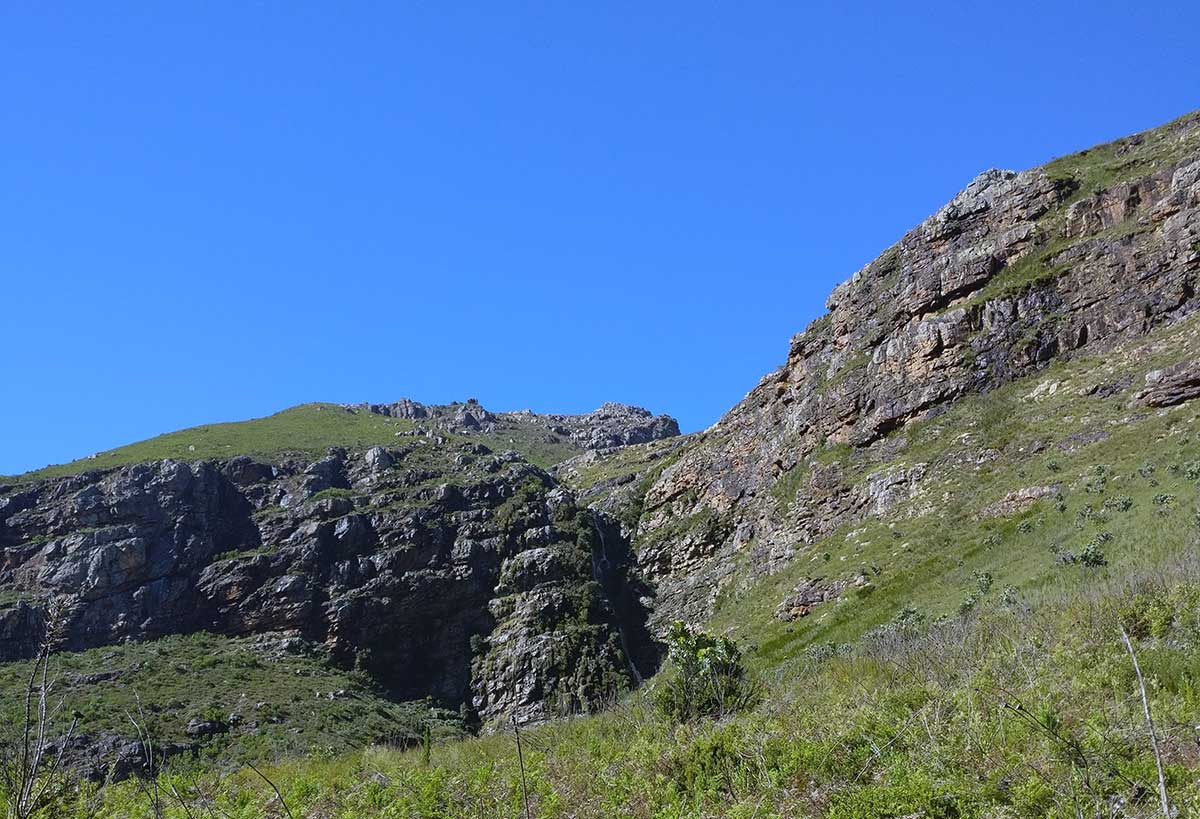 The view of the first waterfall from the trail. It’s tricky to spot in this picture, but you can see it tucked away in the middle of the frame

While on this initial stretch be sure to look out for the flowers along the side of the trail. There are so many beautiful flowers here that I found myself pulling my phone out every few steps to try and capture their beauty. 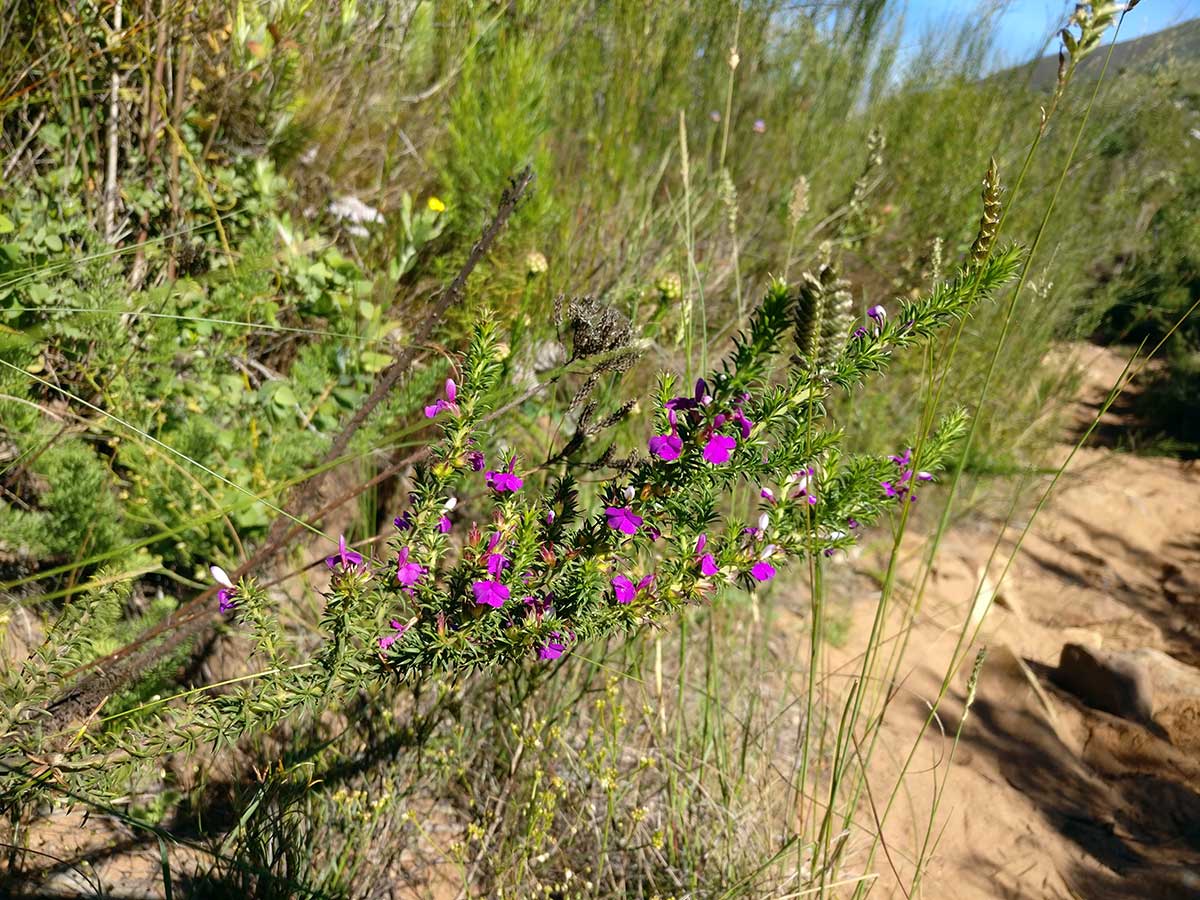 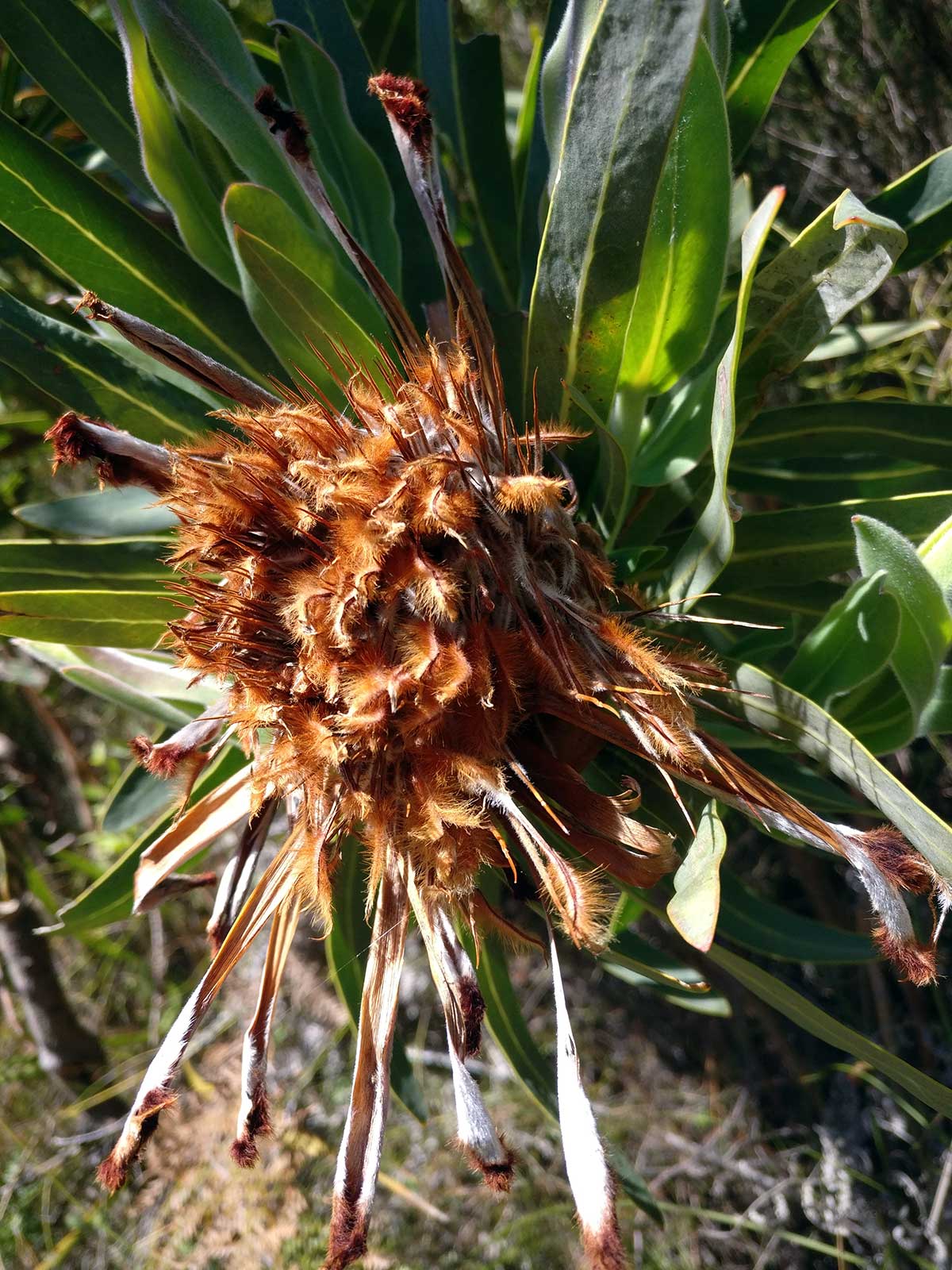 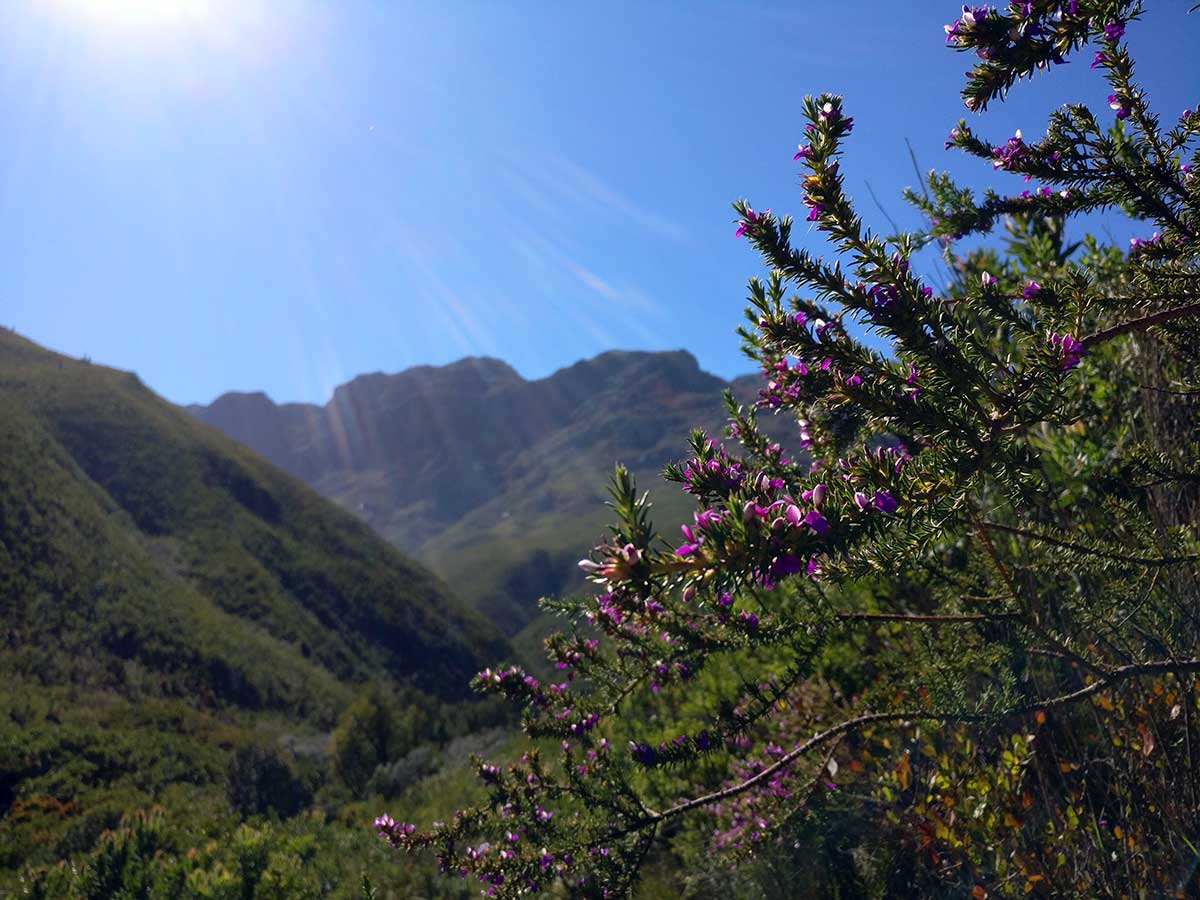 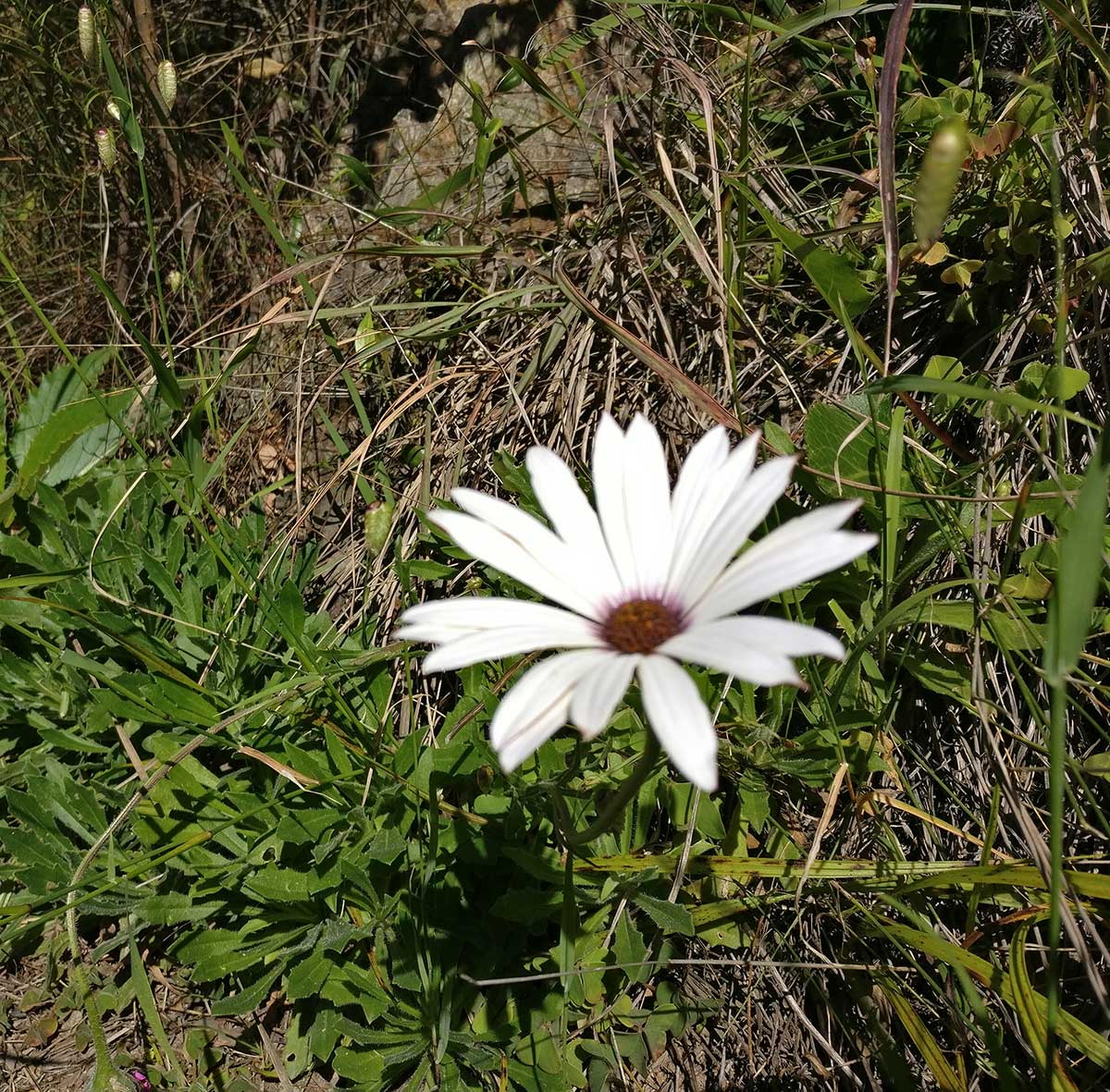 If you don’t mind spoiling the surprises of the trip back, be sure to look behind you every now and then as well. The views behind you are just as stunning as what lies ahead. I couldn’t help myself. 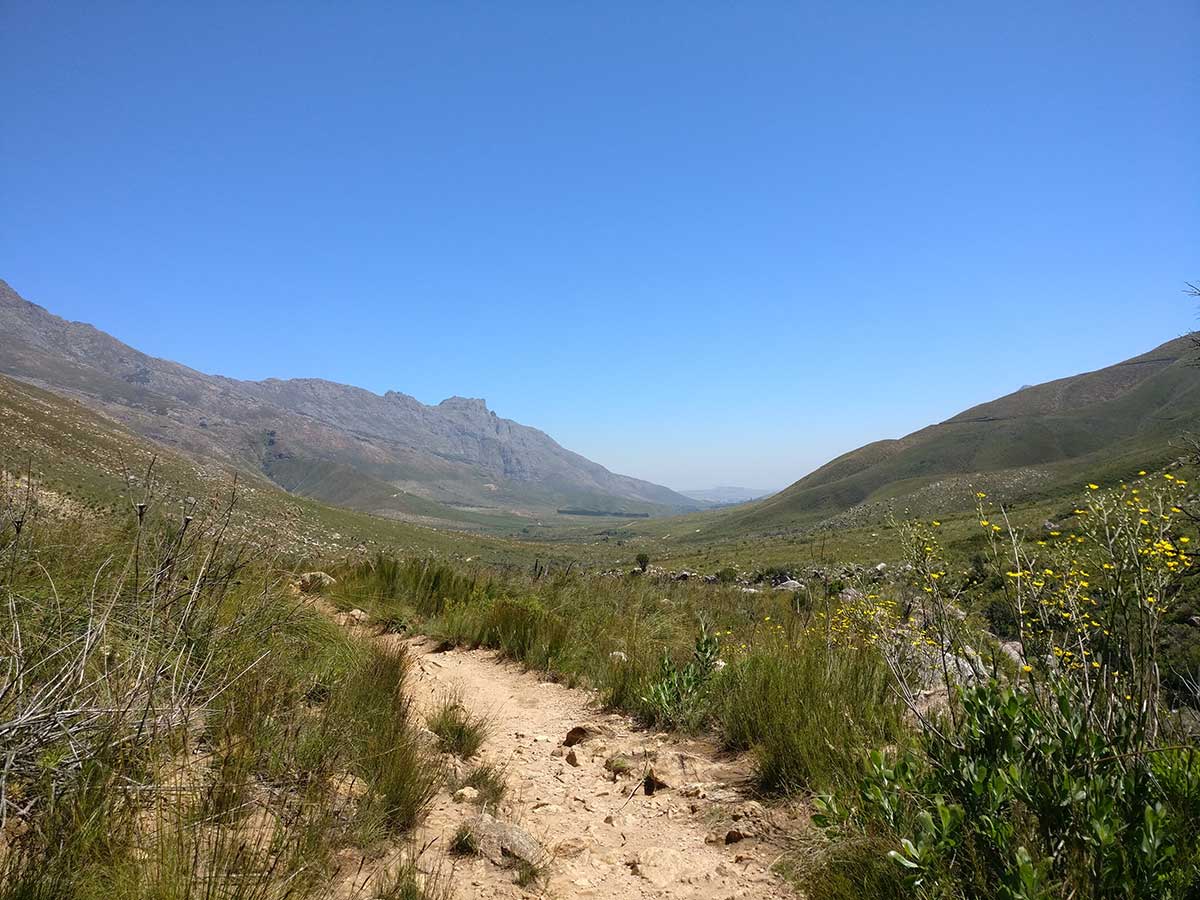 We continued on straight at the fork toward the second waterfall and after a few minutes of walking we came to a small river crossing. This wasn’t difficult to navigate at all, but it can get slippery. It is a nice resting place since it is covered in shade and has a few nice sitting spots. 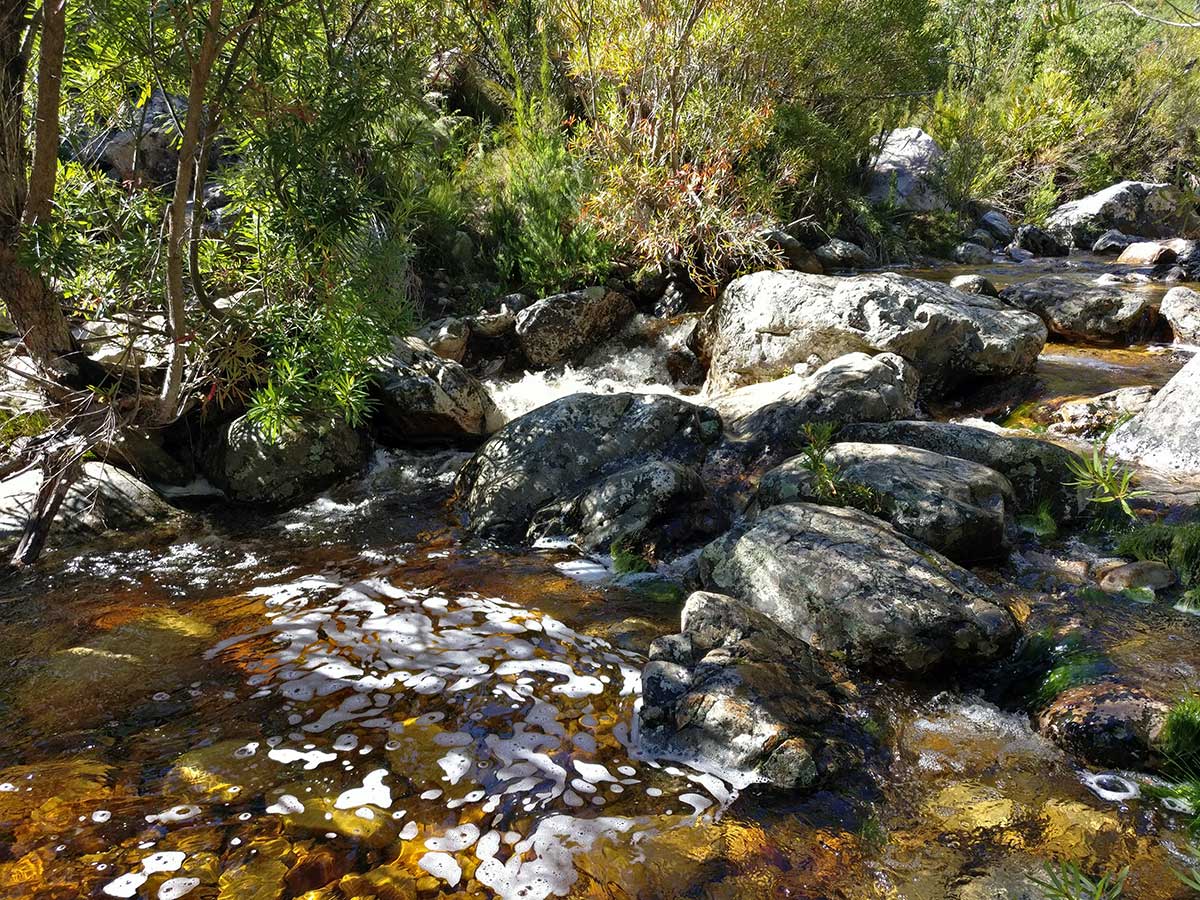 Who could resist relaxing here for a bit?

After the river crossing the path starts climbing very gently. Keep an eye out for small paths off to the left along the main path that lead down to the river. There are lots of large rocks here which allow you to get right up to the water from some great shots of the river. 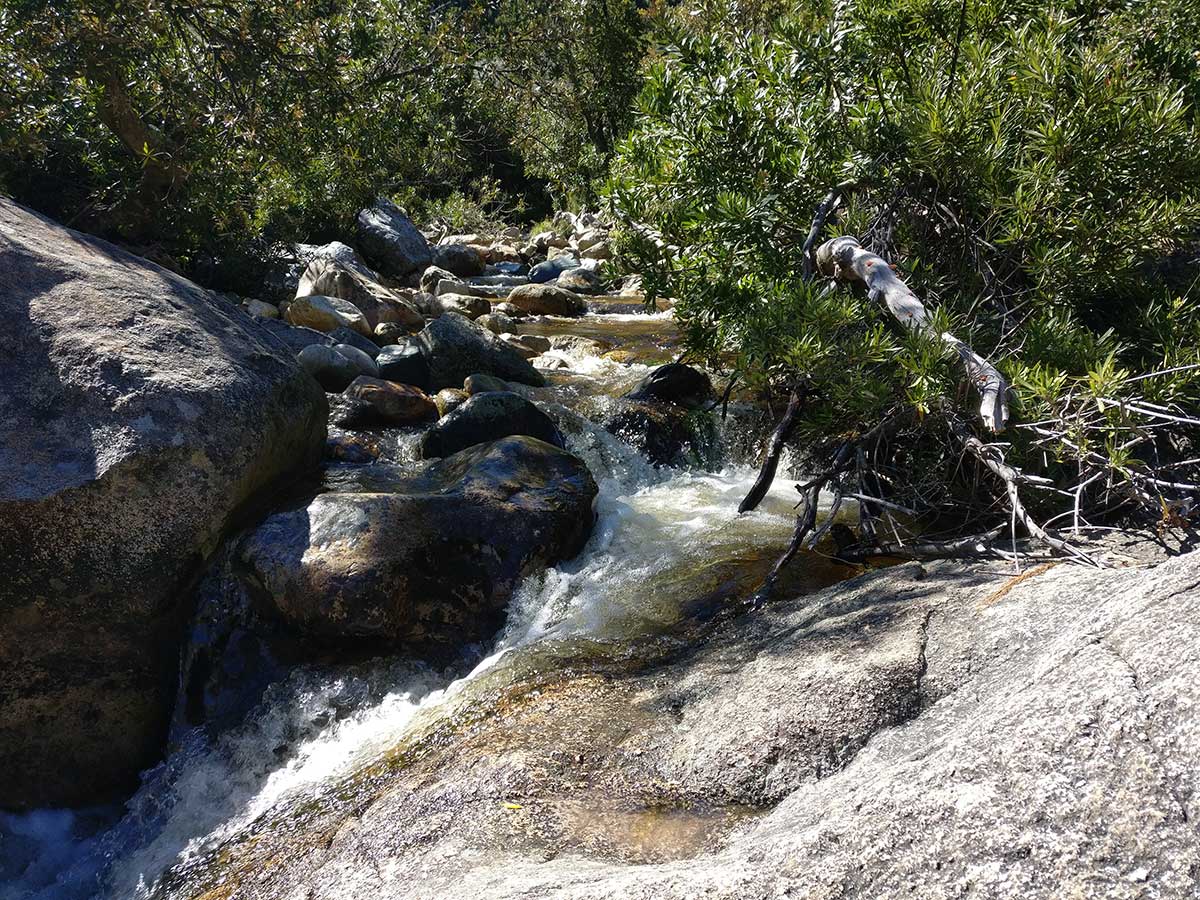 Following the path along you will start getting deeper into the mountains. This is where things start to look really beautiful. The scale of the mountains around you starts to become clear, and they are all covered in lush greenery. The Jonkershoek nature reserve is an absolute treasure. 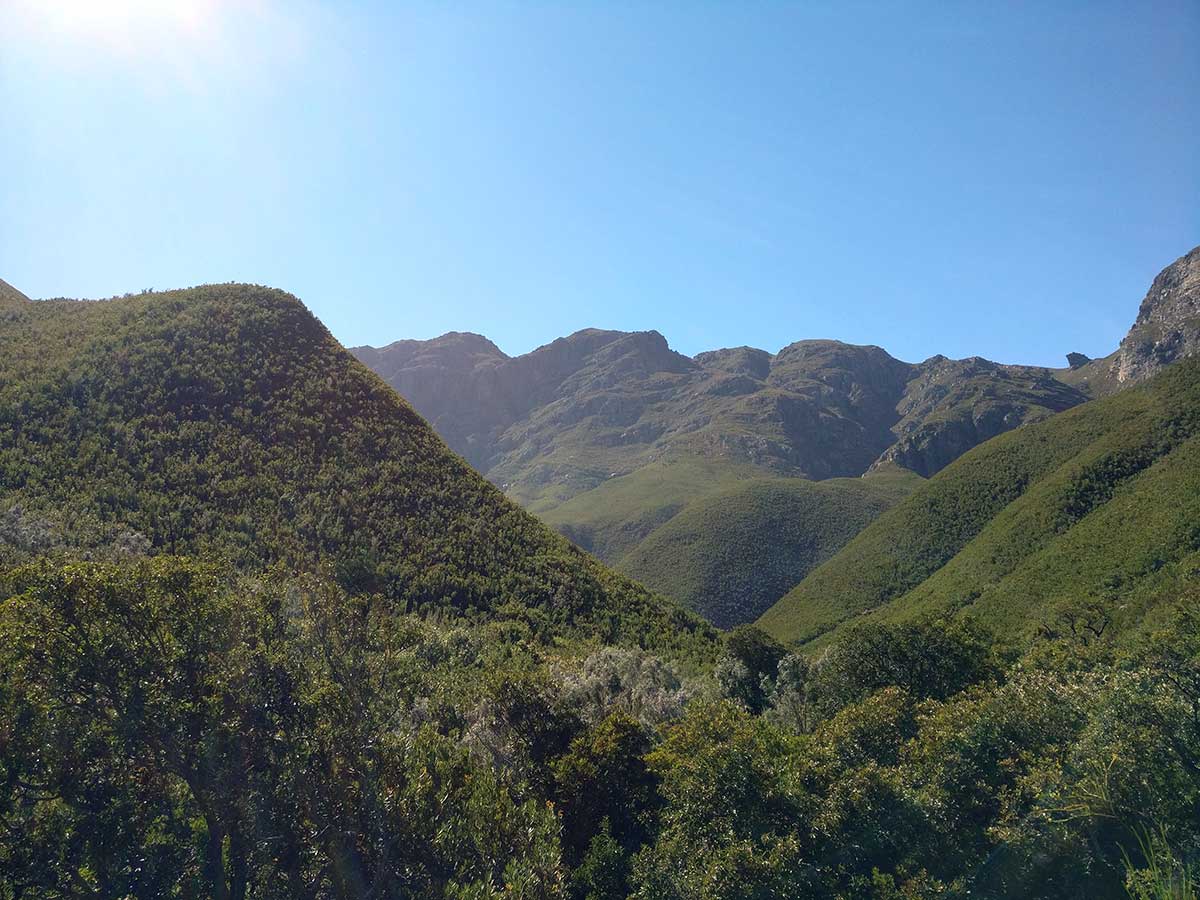 After showing you these amazing sights the trail starts testing your resolve a bit. Up until this point it is rather easy going. Here you’ll encounter some steps which takes you up around 150m of elevation over quite a short distance. It’s not all rough going though. There are some rather dramatic views off to the side of the ravine that the river runs through. 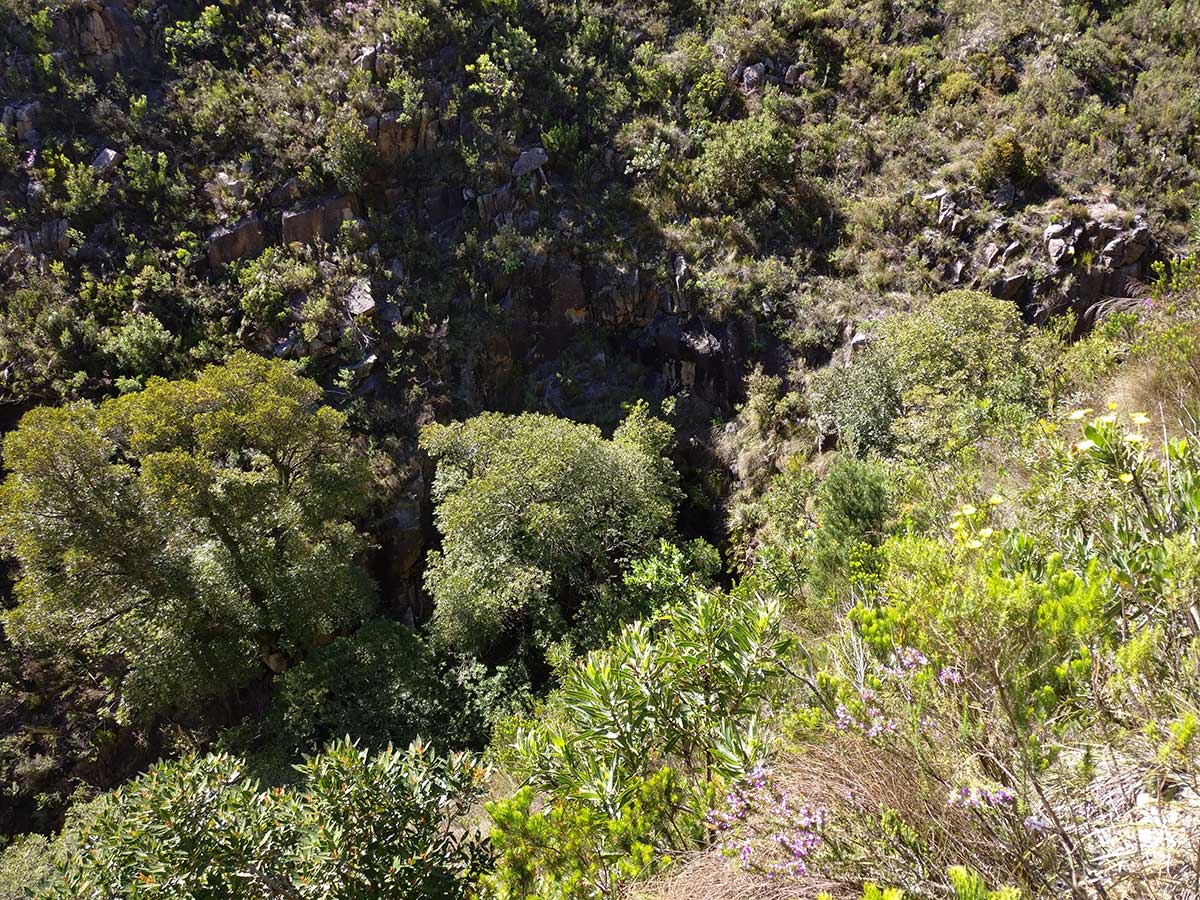 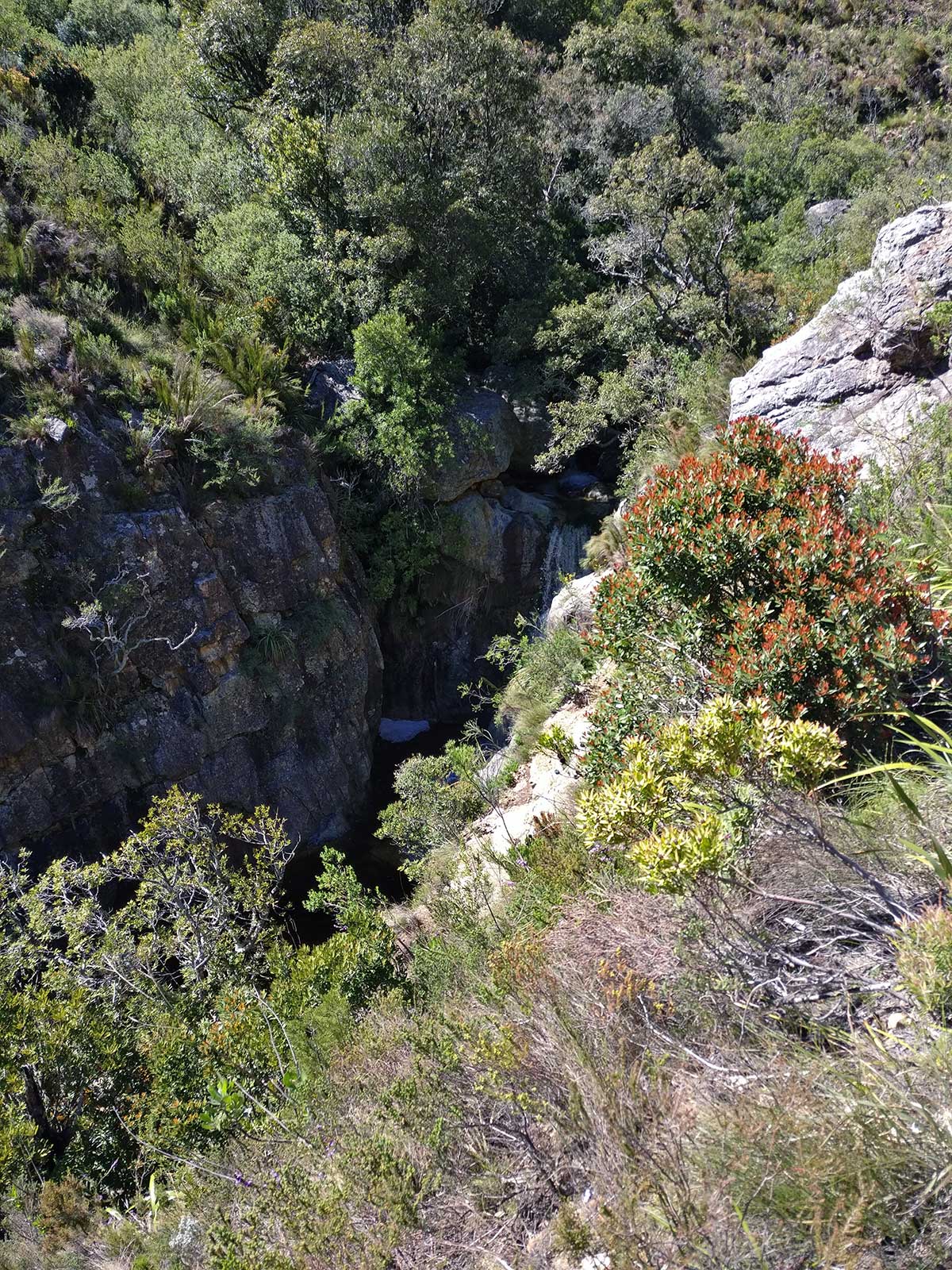 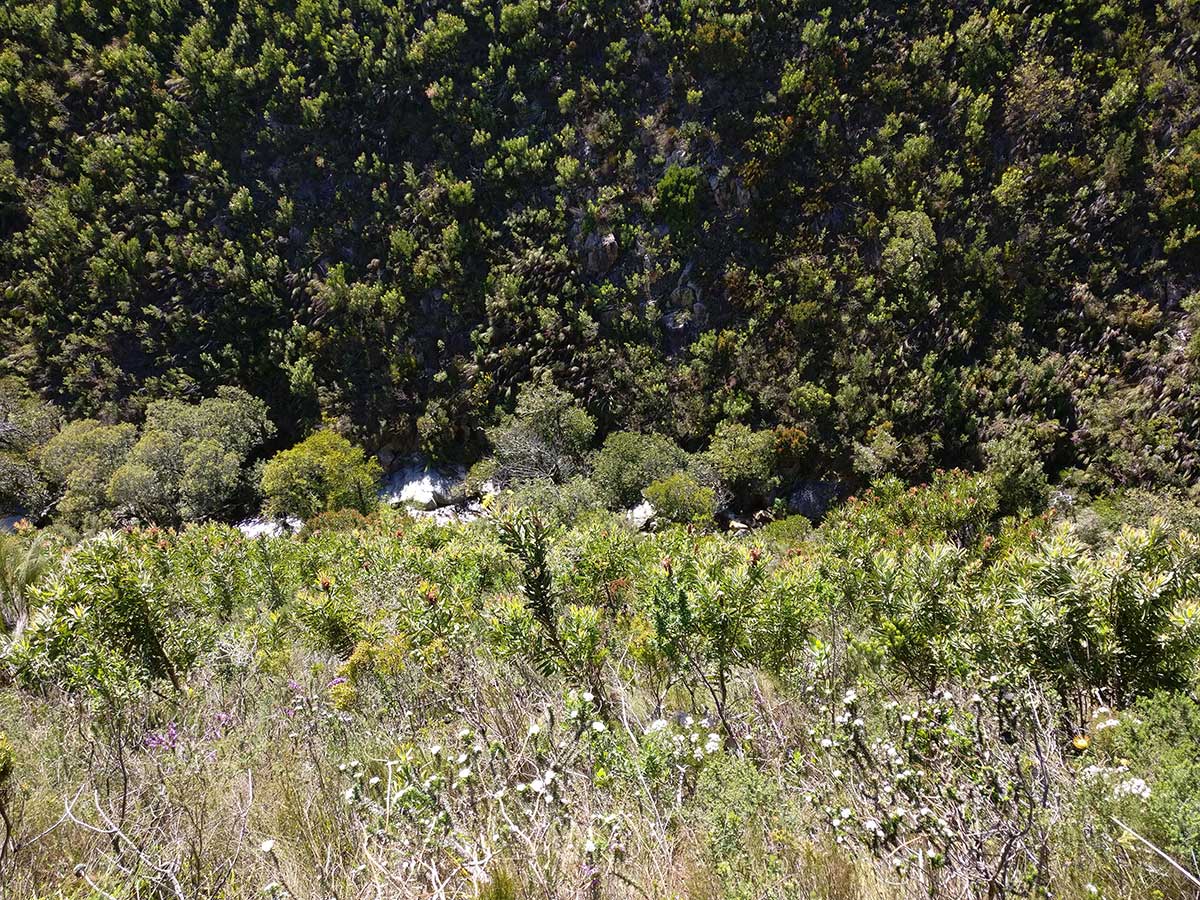 Thankfully the stair test doesn’t last too long. Once it is over you will start descending almost immediately into a shaded section. The increasing sound of crashing water here should tip you off to the fact that you’re nearing the second waterfall. You might even have caught glimpses of it on the stair section of the path. Here you will be rewarded with a lovely pool to dip your feet into as well as a small waterfall.

The real treasure lies behind this small waterfall. Climb up the rocks here and start making your way along the winding trail. You’ll have to make several river crossings here. I resigned myself to the fact that my shoes would end up wet here, it’s extremely difficult to avoid this. I would suggest going barefoot if possible as the path is quite slippery with a hard sole on the rocks. 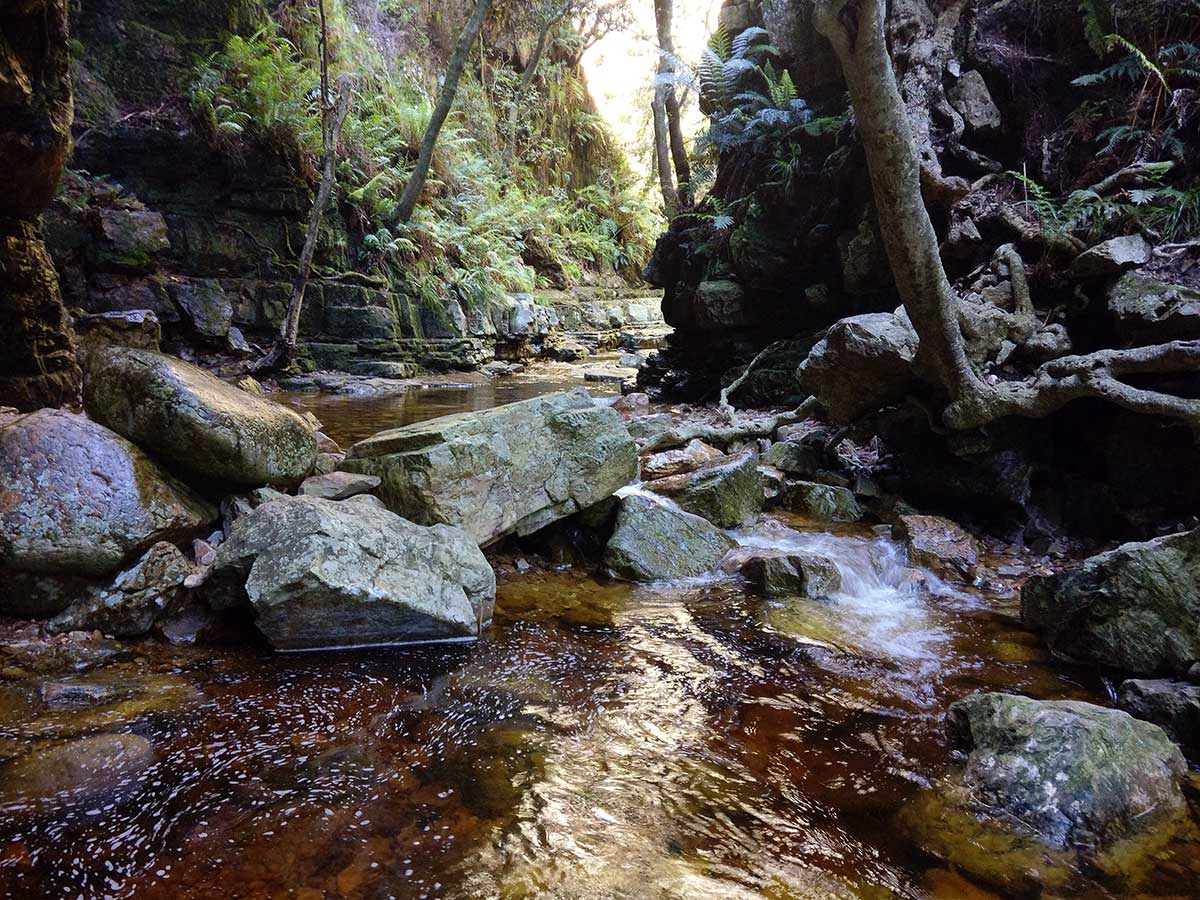 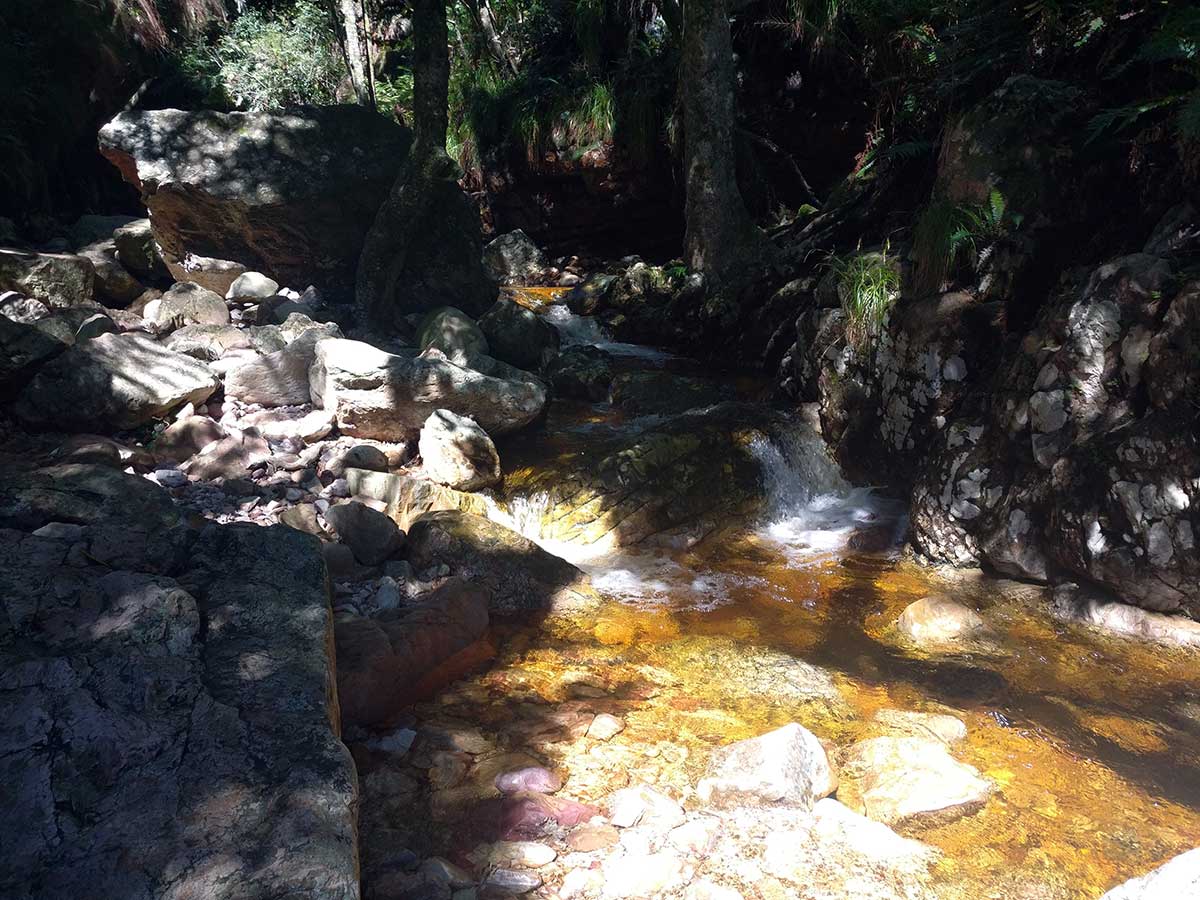 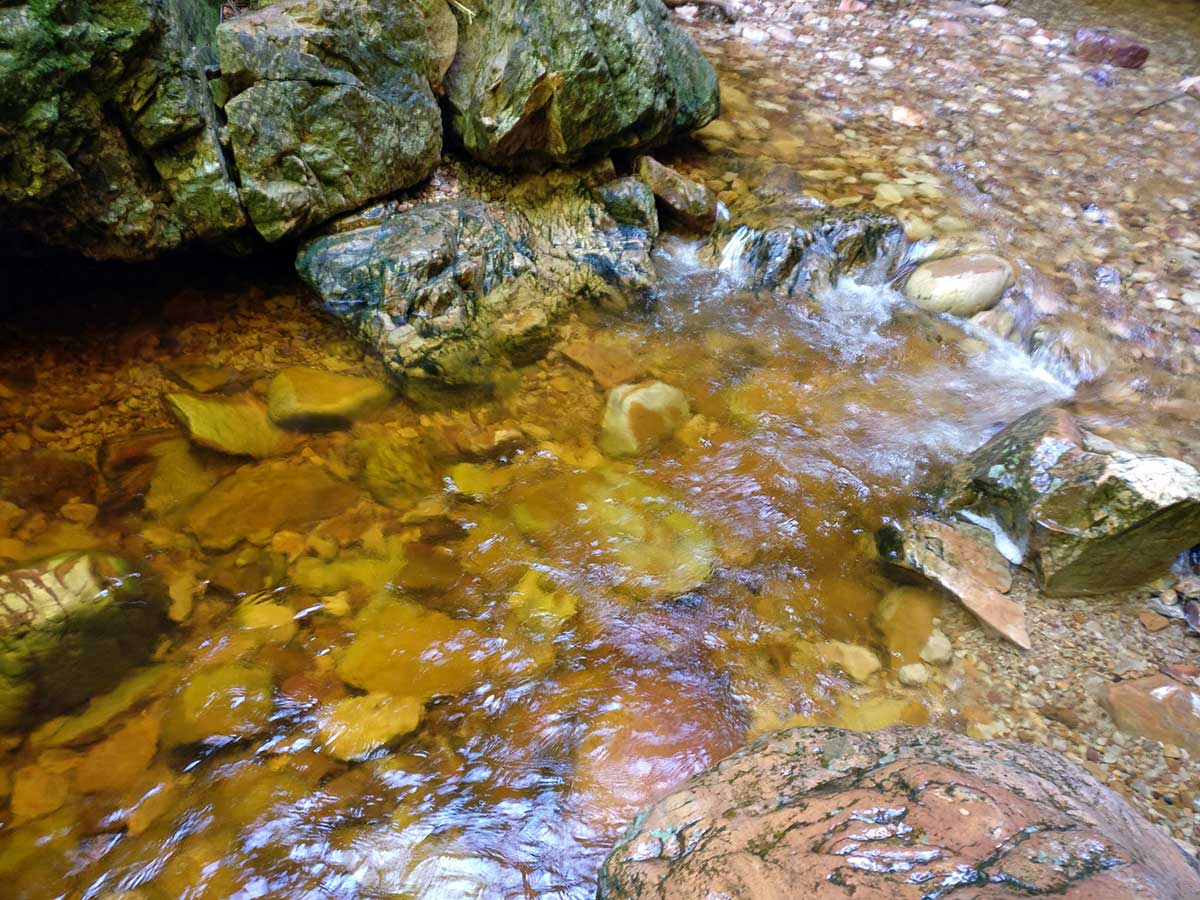 After a few nerve-wracking minutes of river crossings and tricky sidling along the walls you will eventually be greeted with a huge rock pool and the sight of the second waterfall. Worth it! Here you will also get a lovely fresh water shower from the water dripping down the rocks all around you. A great way to cool down. 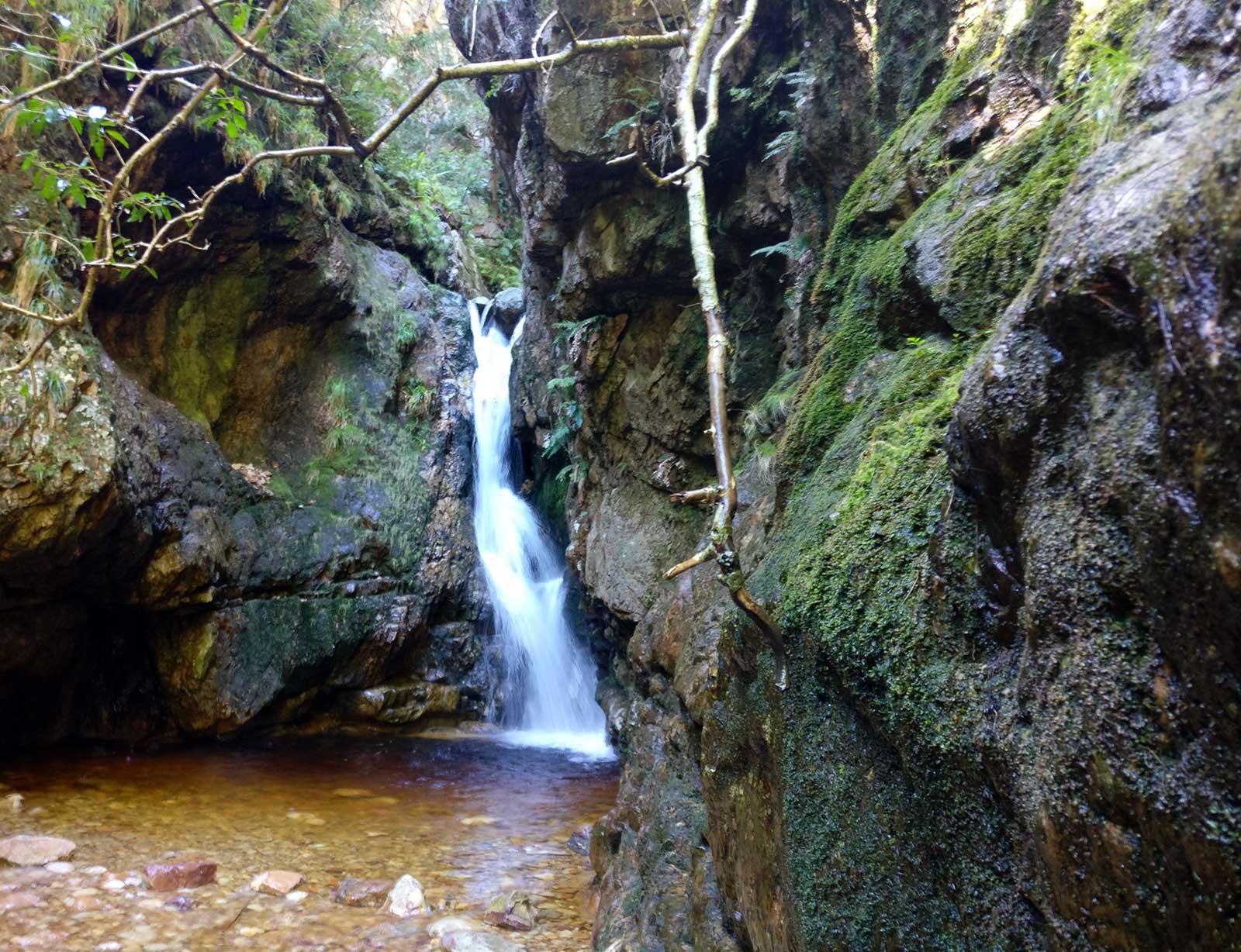 The trail back feels a lot easier, but that could just have been the rejuvenation from seeing the amazing waterfall. If you didn’t spoil them for yourself earlier you will also get to experience the views of the mountain range on your way back.

The trail took us around two and a half hours to complete. The distance is 6.4km for the entire route with a total elevation gain of around 250m. This was a rather easy hike along well defined paths so it is perfect for hikers of all ages and skill levels. The last bit after the small waterfall can be quite tricky, so it’s best attempted by the sure-footed, but even without doing the last section it is still a great experience. There isn’t a lot of shade from the harsh Stellenbosch sun, so I would recommend starting early. The Jonkershoek nature reserve opens at 8AM year round. 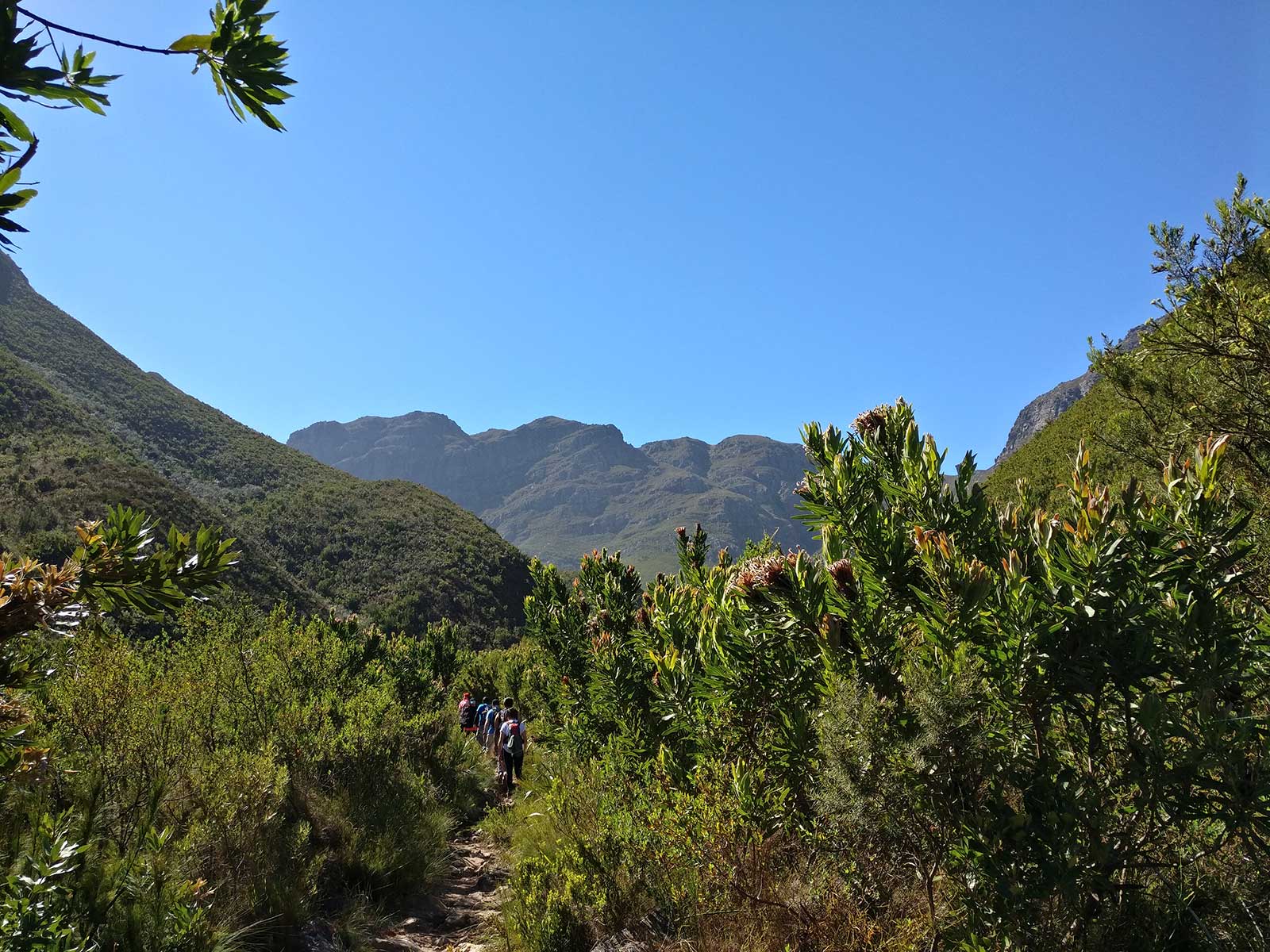