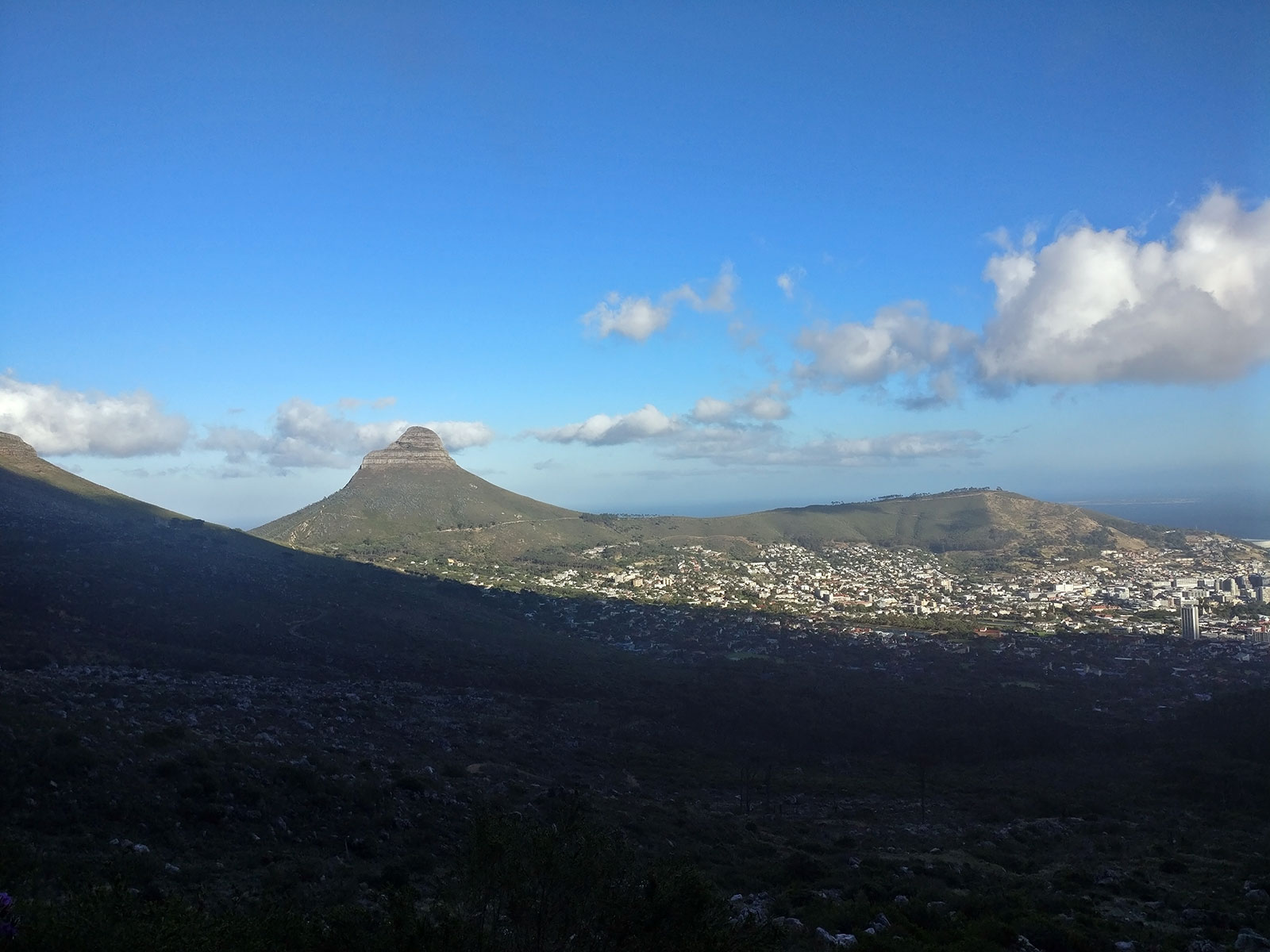 We initially intended to climb up Devil’s Peak via the Mowbray Ridge from the Tafelberg Road starting point but the hiking trail book that I consulted before starting strongly suggested a different route when the wind was strong. Since the wind was quite strong at the bottom we decided to take the Saddle Path up to the peak. The Saddle Path is the shorter and easier trail, but it is still a fairly sustained climb up to the 1km-high peak.

Most of the trails up to the peak start at Tafelberg road just after the Platteklip Gorge parking. 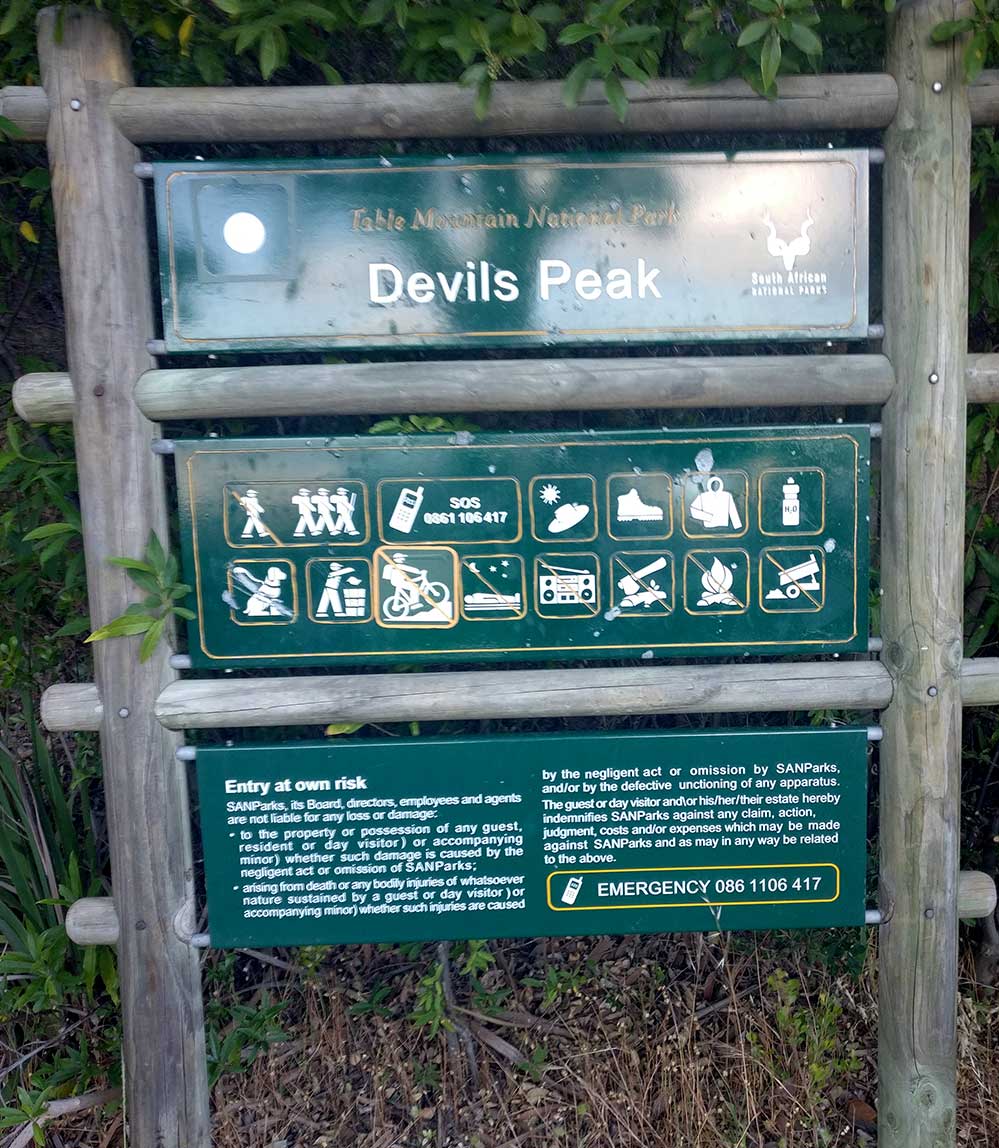 The trails all start by going up the stony steps for around 30 minutes until they split off at the fork at the Contour Path. From here you have the option of heading to the Mowbray Ridge and Oppelskop to the left, the Frontal Contour Path to the right and the Saddle Path if you continue heading up after a few metres. 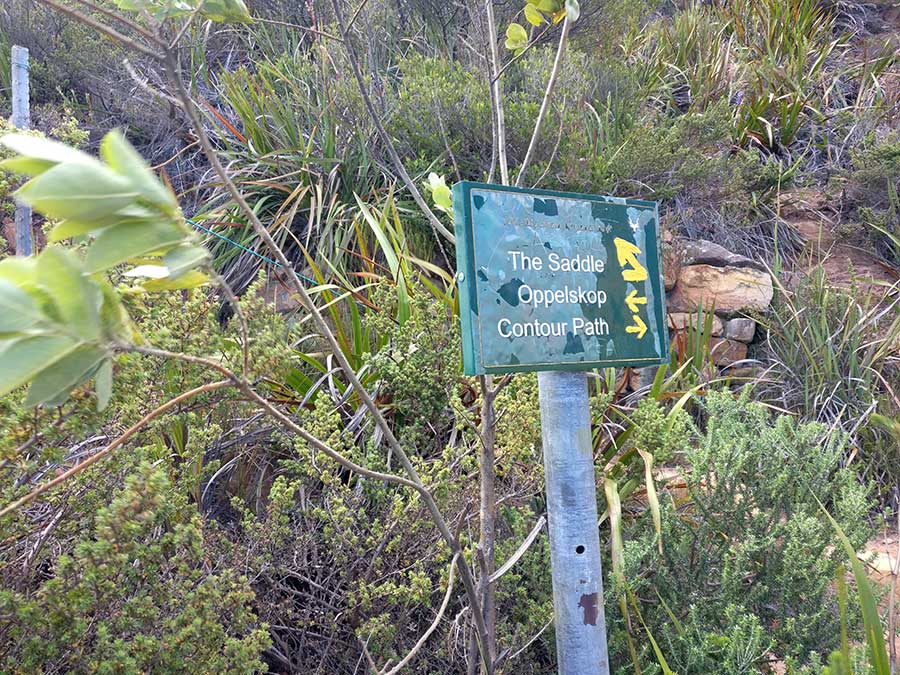 Before heading off at the route marker, turn around and admire the view of Signal Hill and the Cape Town City. The view will soon be obstructed as you go around the mountain. 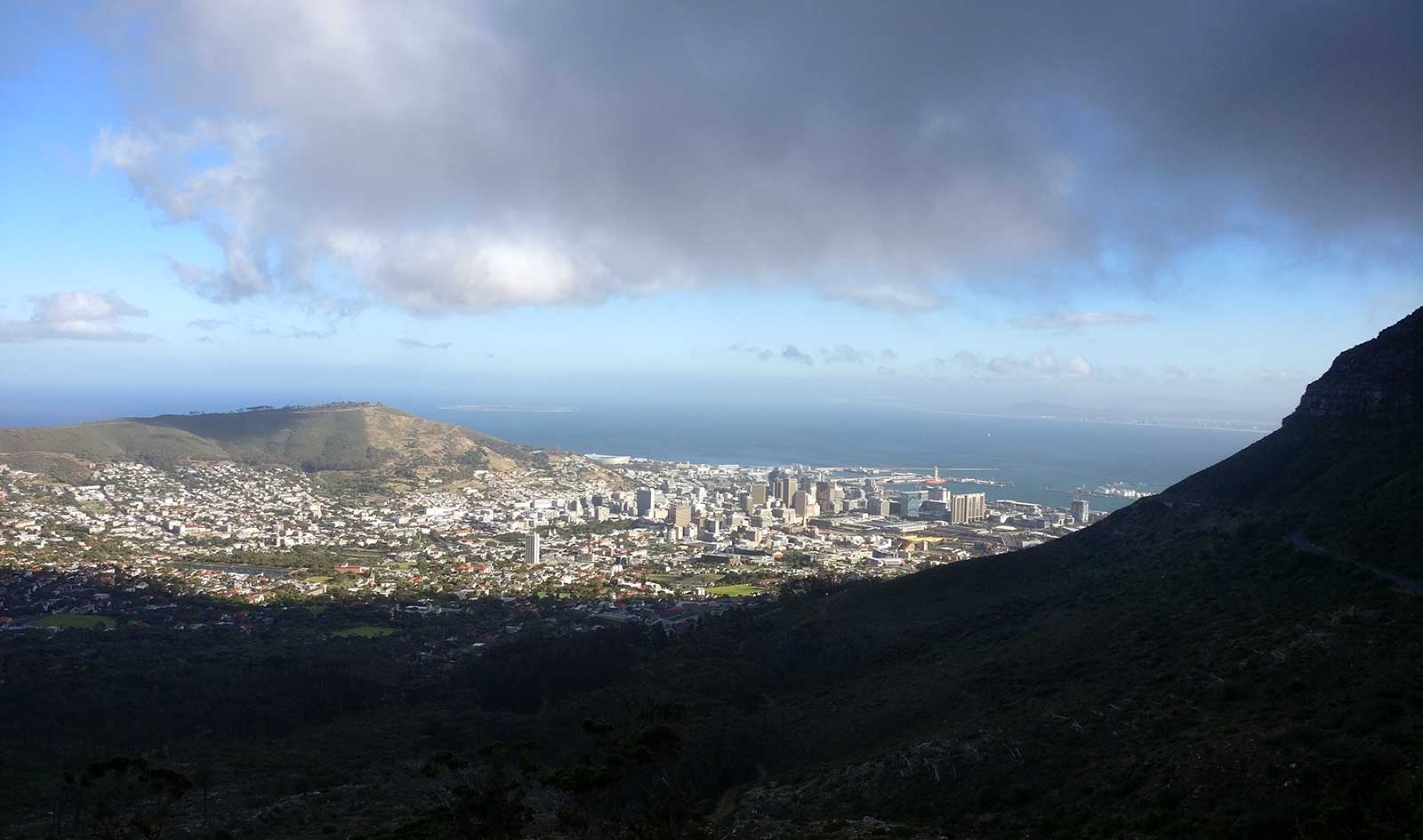 After taking in the views continue climbing for a bit and you should reach a flat-rocky road reminiscent of the Contour Path. This takes you around the mountain to a huge rock called Breakfast Rock at The Saddle for which the path is named. 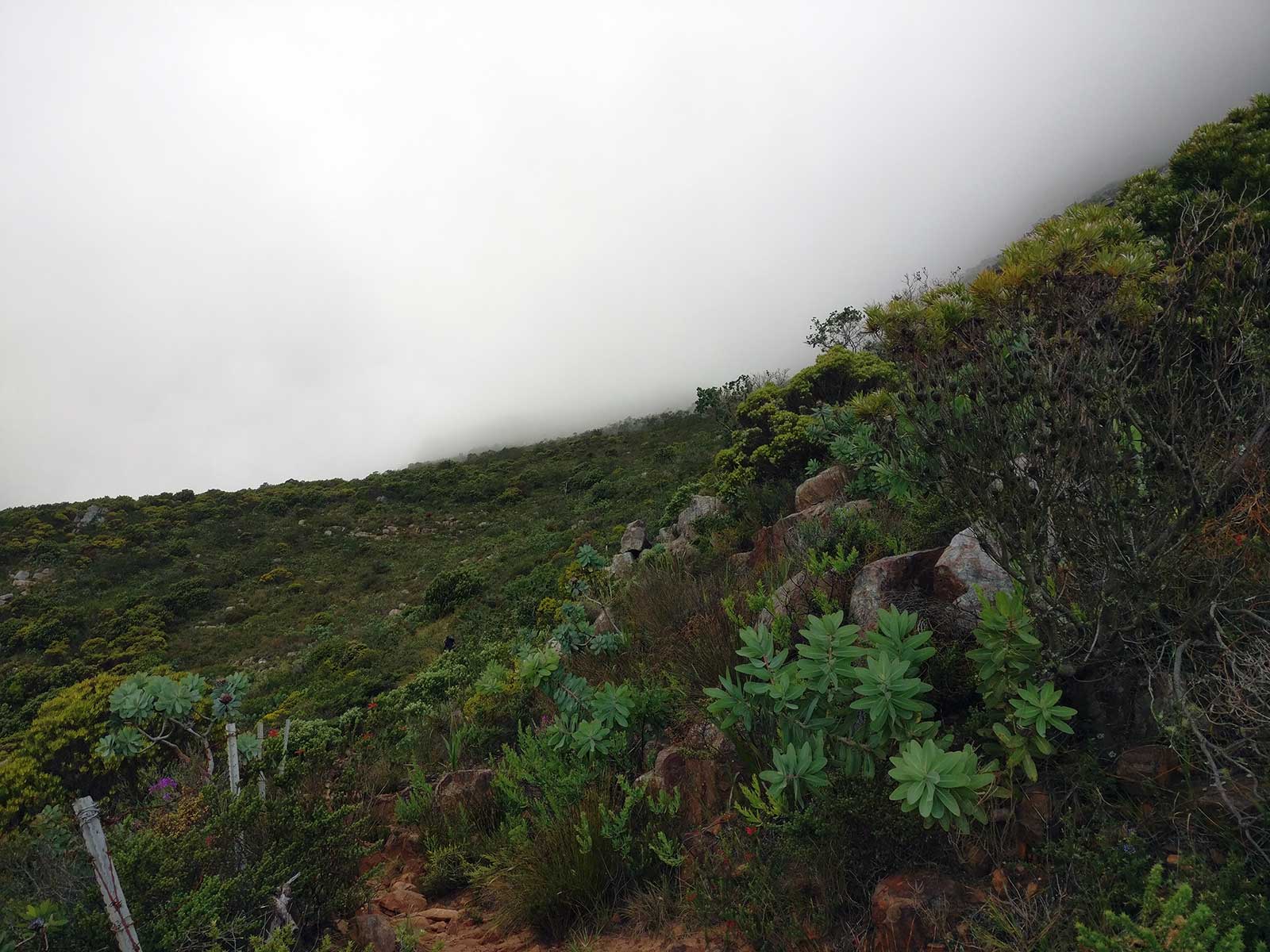 It was around this time that the clouds really started rolling in which concerned us a bit, but we continued on anyway.

Breakfast Rock is a good place to take a rest and have a snack but unfortunately the clouds made it rather wet and unpleasant for us, so we opted to rather keep moving as fast as possible to keep our temperatures up. 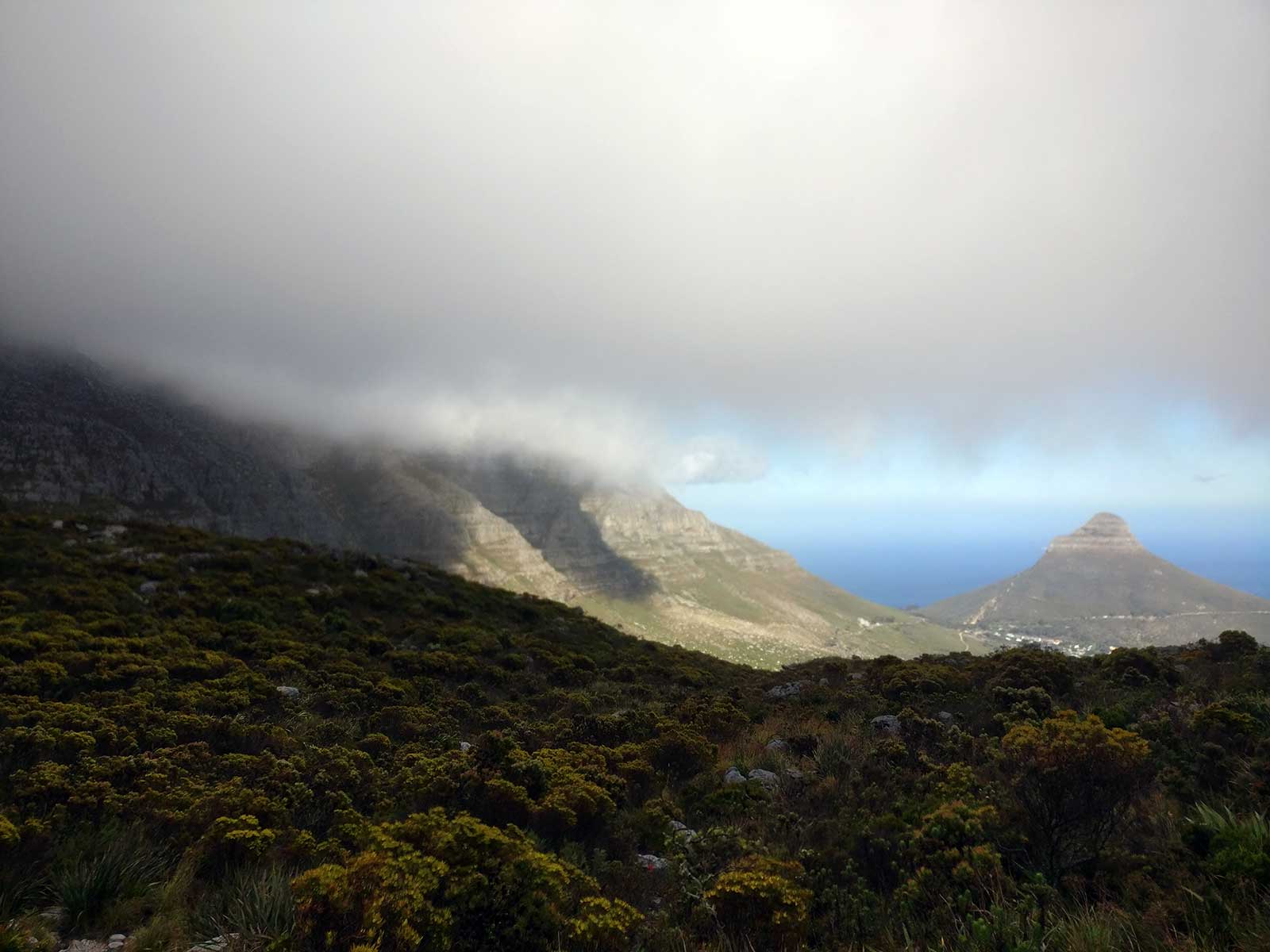 Unfortunately the path becomes quite steep and treacherous to traverse after Saddle Rock so we couldn’t really achieve the pace we wanted to. There are lots of loose pebbles on the sandy slopes, so watch your footing. These slopes also seem to amplify the wind speed, so that’s something to keep in mind on a moderately windy day.

As tricky as it is, the path is very clearly marked. Every so often you will come across a signpost or beacon showing you the way to the peak. This was quite useful to us as eventually we had almost no visibility. 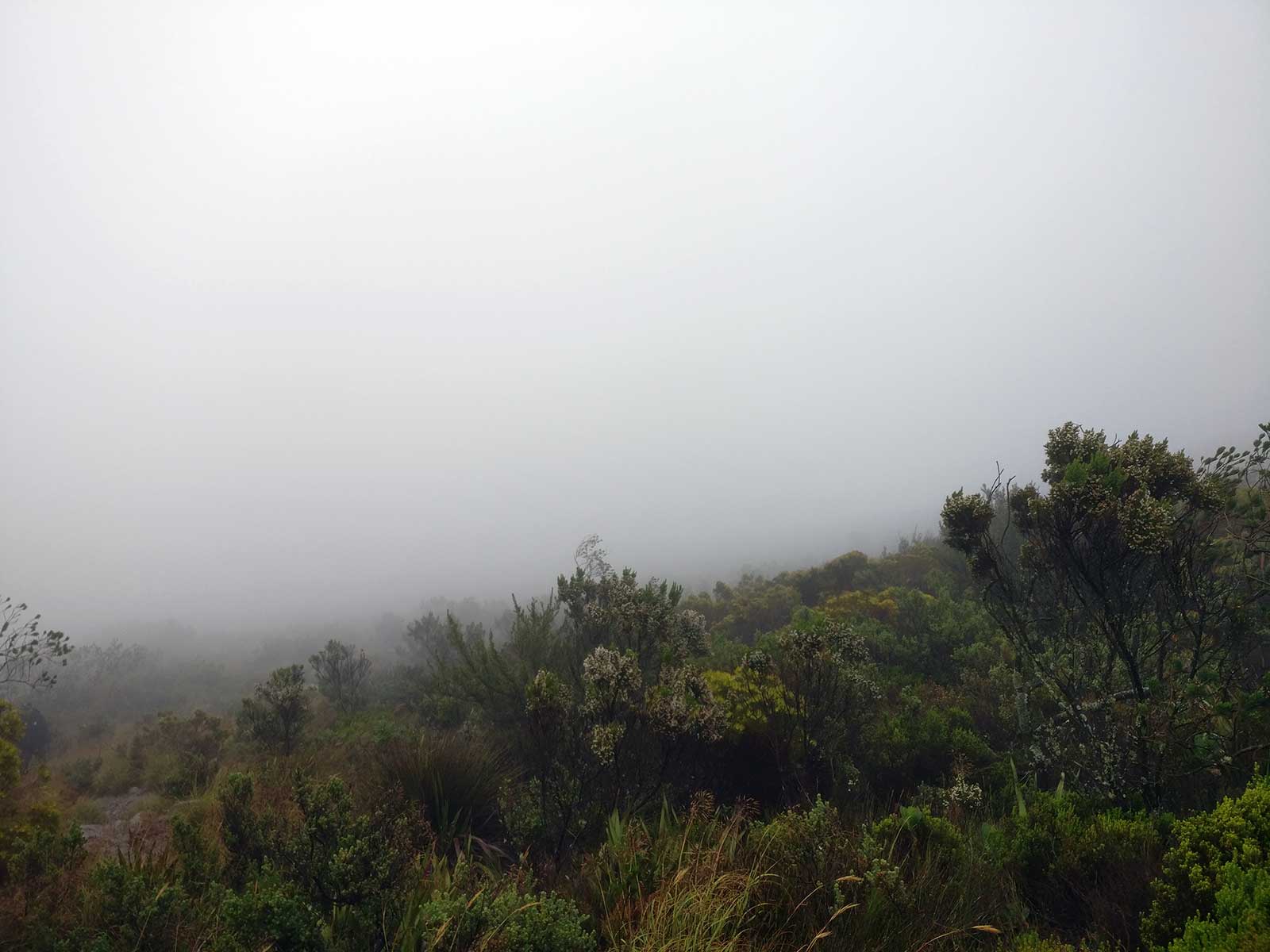 This was how far we could see

Eventually at around 870m elevation we reached a ravine where the wind was so strong it nearly blew us off our feet. After huddling behind a big rock waiting in vain for the wind to subside a bit we decided to call it a day and head back down. It was quite disappointing to get so close to the peak and have to turn around, but the conditions were extremely unsafe.

On the way down we got a few minutes of clear weather to enjoy some of the scenery we couldn’t see while going up. 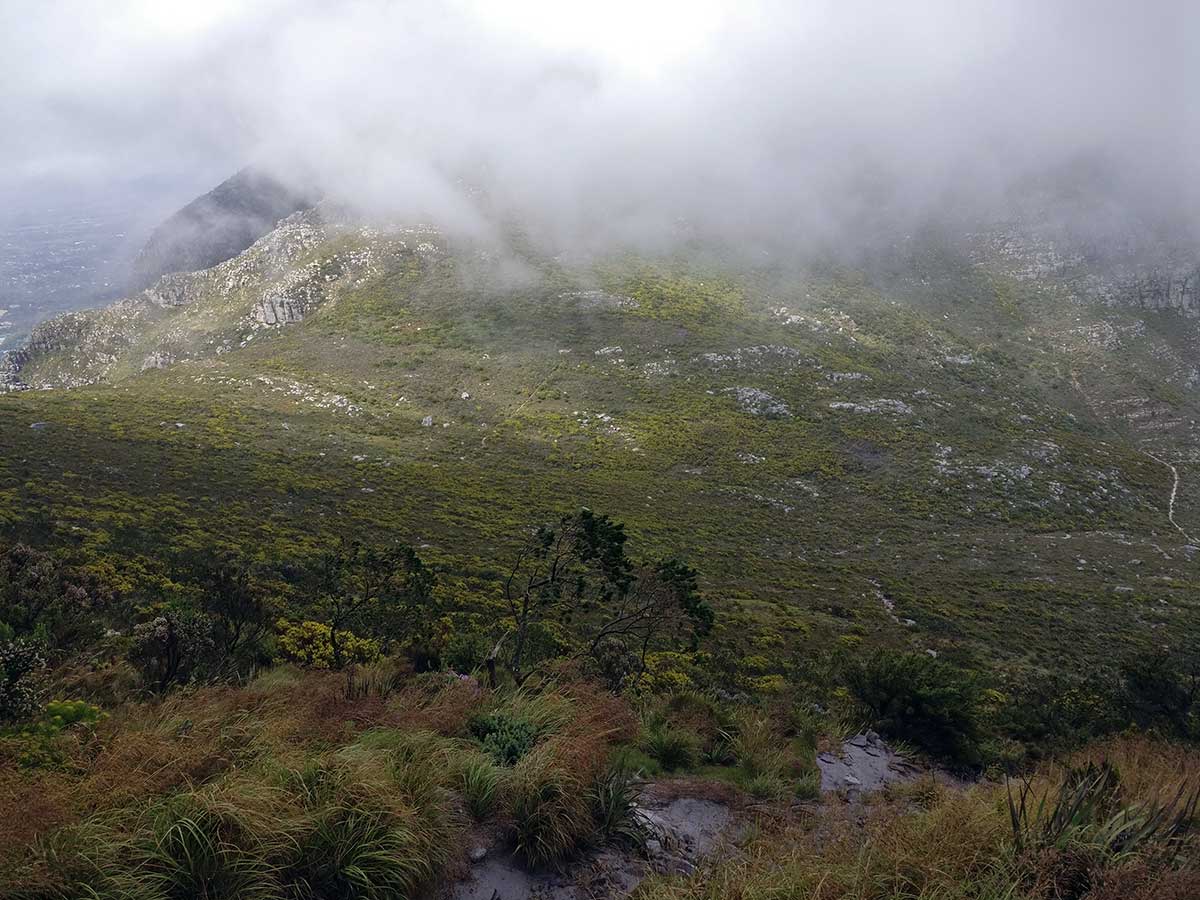 The hike was not a complete disaster though, the further we descended the better the weather got. Even the flowers seemed more vibrant without the cloud cover. 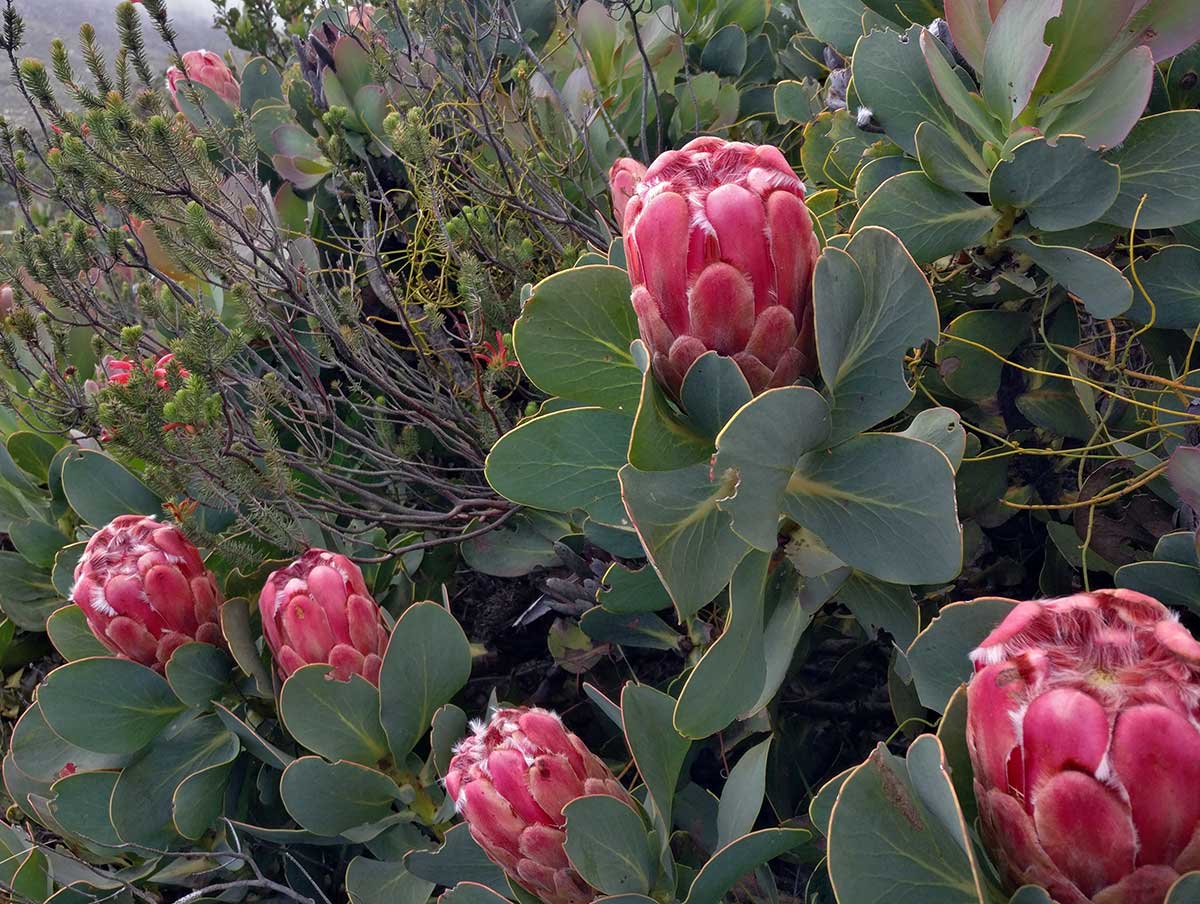 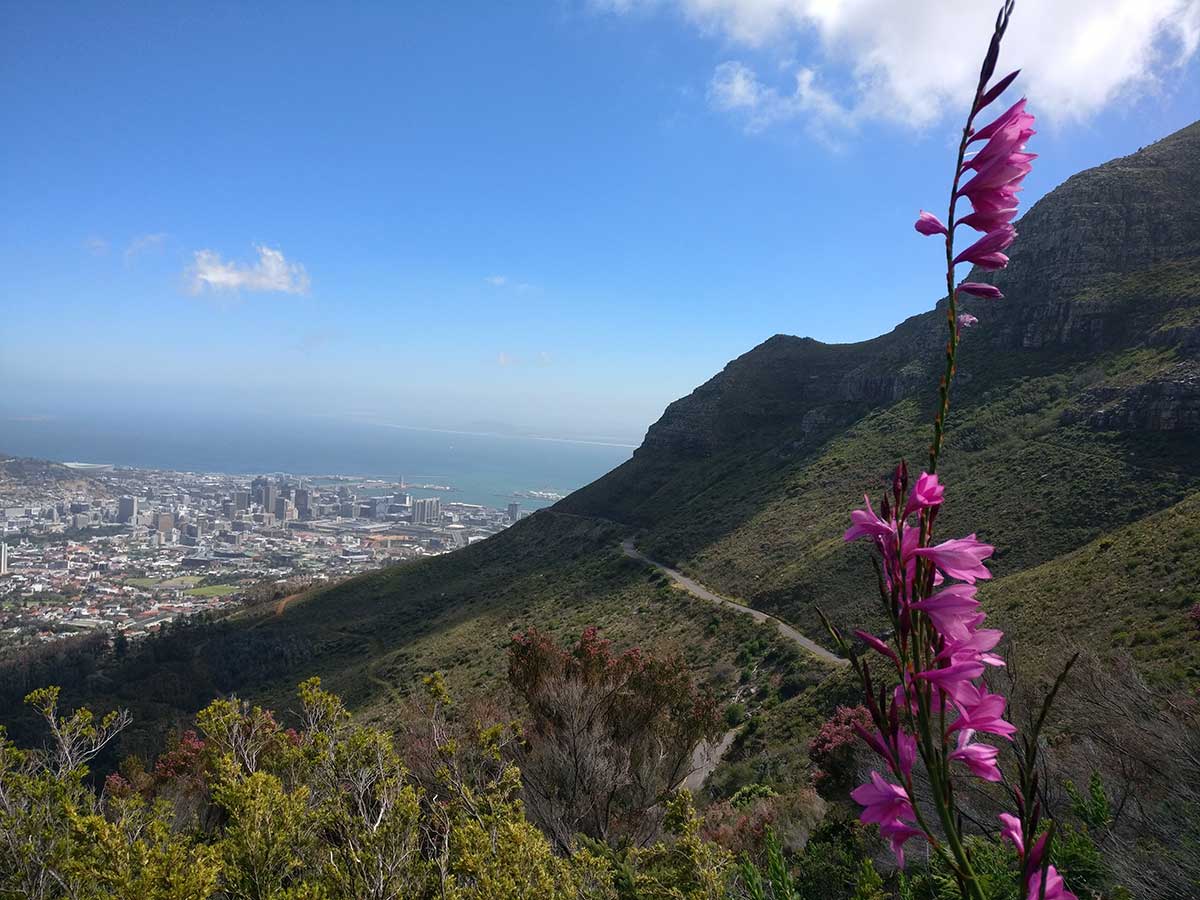 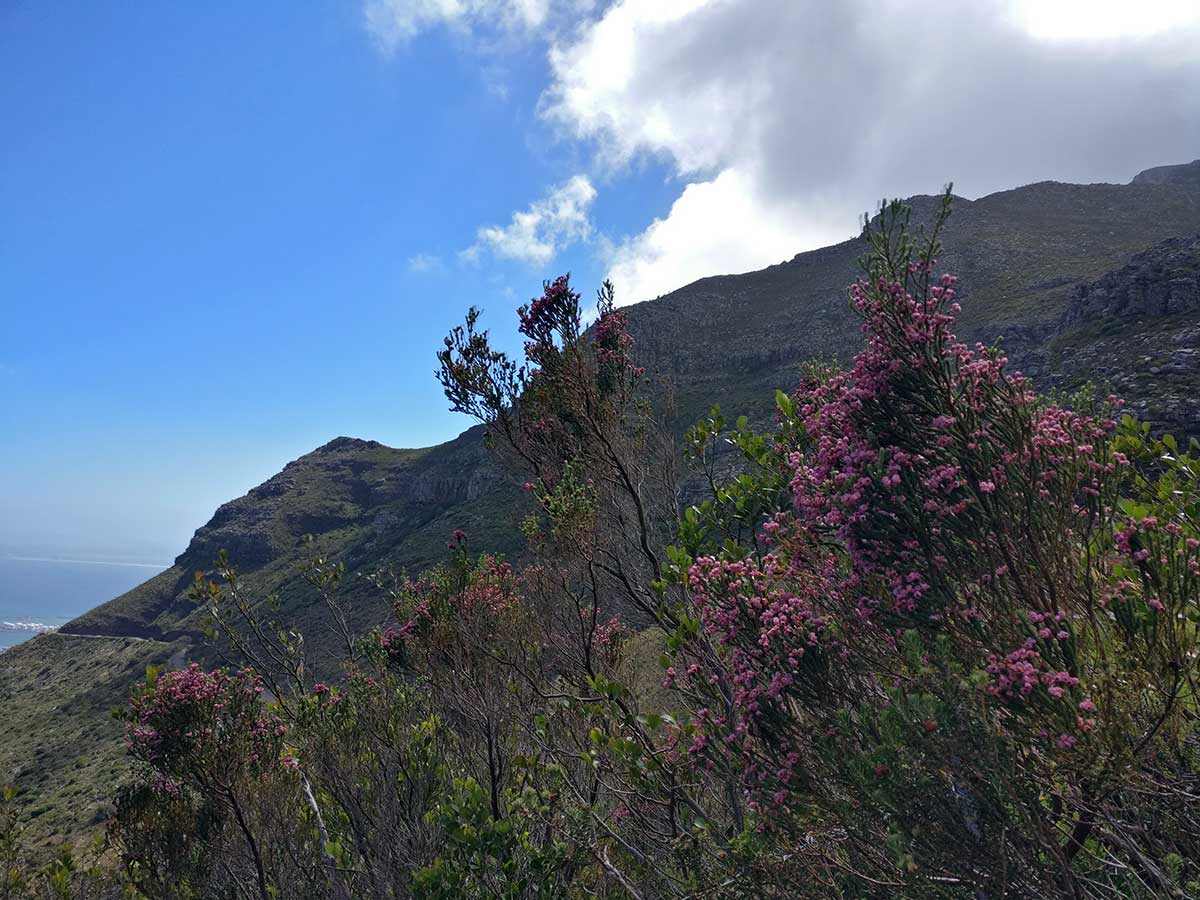 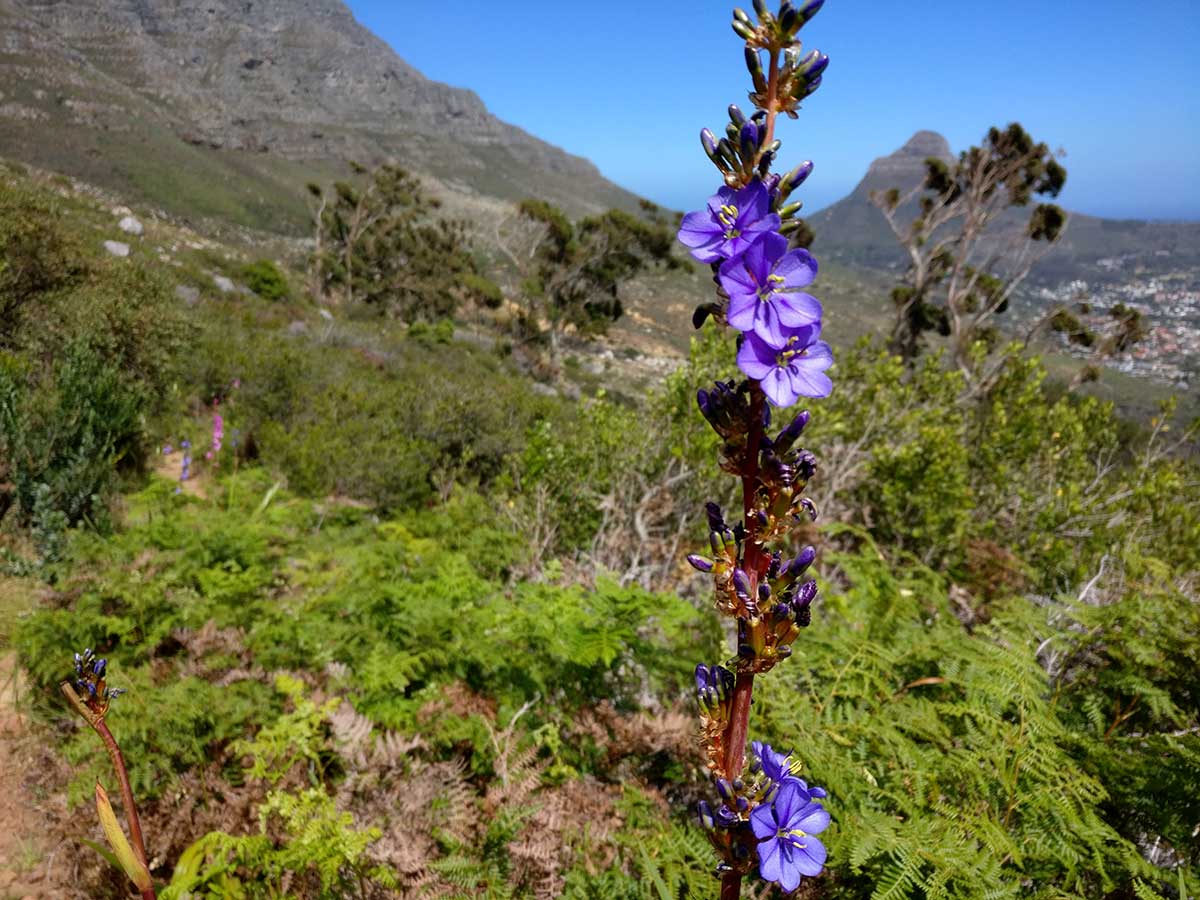 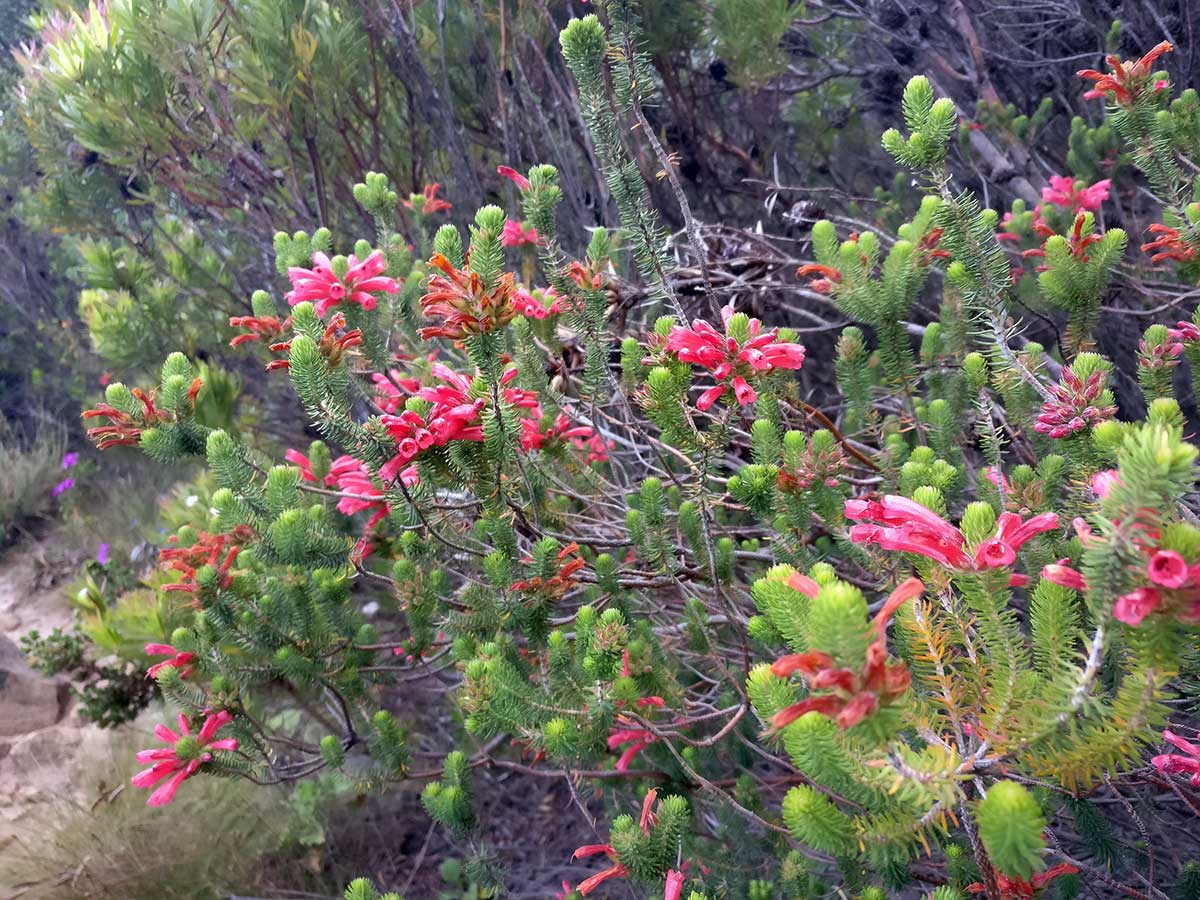 Getting to where we got to took around two hours and I would estimate that the final 100m of elevation would take around 30 more minutes to complete. The trail is quite steep and difficult, so be prepared for that. The weather can also change quite quickly, so bring extra layers of clothing. I recommend against attempting this trail if it is too windy out, as the conditions worsen quite a bit as you approach the peak. The total elevation gain is around 700m total. This is the route we took:

While it is disappointing that we didn’t make it to the top, I am definitely looking forward to returning and trying again. Perhaps this weekend the conditions will be better. Fingers crossed! 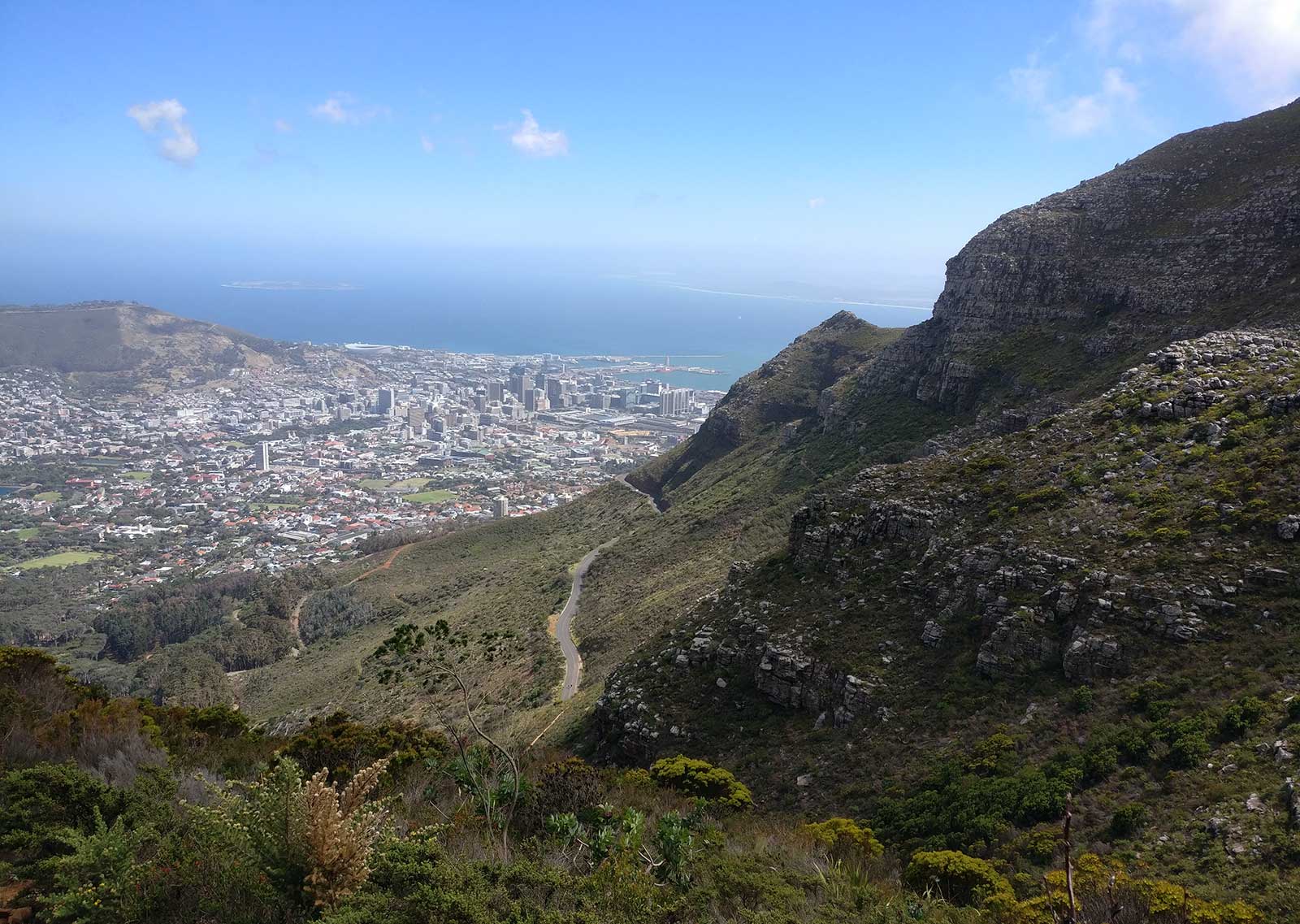